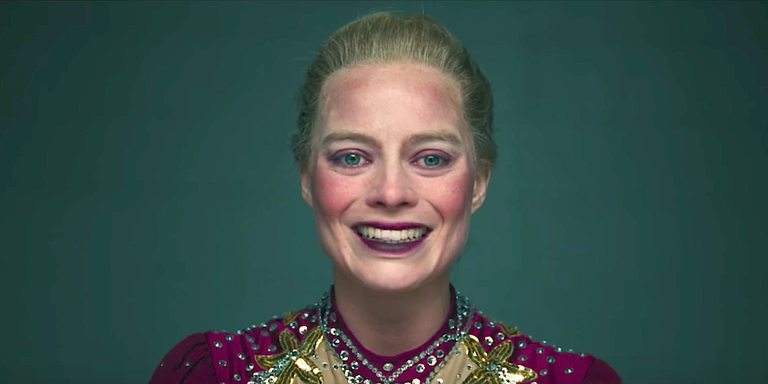 Margot Robbie, take a bow. Landing her big break as Naomi LaPaglia opposite Leonardo DiCaprio in Martin Scorsese’s The Wolf of Wall Street (2014), Robbie has well and truly arrived with I, Tonya. Here, she stars not as a secondary character but rather as the driving force in a film about a whole lot more than figure skating.

Bound up in the events which led to the downfall of former US World Champion figure skater Tonya Harding, the film charts her rocky rise to fame (much to the chagrin of the sport’s overseeing body) and the notorious incident of which younger audiences – especially those of a similar age to central actress Margot Robbie – are perhaps relatively unaware. Given figure skating doesn’t exactly garner a huge profile in this hemisphere, a lot of audiences, especially Australian, may be oblivious to and/or disinterested in Tonya Harding and her exploits. For a niche sport, this is not a niche movie. A barbed commentary on modern America, it is accessible on various levels. For those genuinely interested in figure-skating, including the quadrennial dabblers, the release timing is prime with the Winter Olympics nigh. While there are figure skating sequences in the film, a conventional sports film this is not.

It must also be noted that this is not a documentary. Any seasoned movie-goer knows that the term ‘true-story’ may as well mean ‘tread with caution’. There is still controversy surrounding the events of the Harding/Kerrigan incident, not to mention the fact that a critical player in the infamous and harebrained scheme is now dead. Nevertheless, the promotional trailer provides a fairly clear indication that what the audience is in for may not quite be the absolute, ultimate, unadulterated truth: “There is no such thing as truth. Everyone has their own truth.”

Disclaimers aside, and as far as storytelling goes, this is an exceptionally well-mounted and thoroughly engaging piece of cinema. Steven Rogers’ script is very much a step-up critically from his past work (Love The Coopers, P.S. I Love You, Kate & Leopold). For her performance and for good reason, Margot Robbie (Suicide Squad, Focus) has been nominated for an Academy Award for Best Actress in a Lead Role. What’s more, a fellow Aussie has steered proceedings. Sitting in the director’s chair, Sydney’s Craig Gillespie (The Finest Hours, Million Dollar Arm, Lars & the Real Girl) has delivered one of his finest offerings to date. Furthermore, Robbie has not only turned in what is undoubtedly the best performance of her career so far, she even doubled as a producer for the film.

Allison Janney (Mom, The West Wing) partners brilliantly with Robbie as LaVona Golden, and is also Oscar-nominated for her Performance by an Actress in a Supporting Role, having already won the Golden Globe in the same category. The remainder of the cast are all on-song with Bobby Cannavale’s (Blue Jasmine, Boardwalk Empire) cameo as a fourth-wall-breaking journo-cum-narrator sitting nicely within the whole. Paced to perfection, make sure to also stick around as the credits roll for interview footage which really validates some of the performances. With cracking dialogue, a soundtrack harkening to Tarantino’s knack for picking the right numbers, and Oscar-nominated editing harnessing a frenzied finesse, I, Tonya is electric, energetic, and fresh film-making.

While some may argue it skates around the extent of Harding’s alleged involvement in the ignominious attack on fellow figure-skater Nancy Kerrigan, I, Tonya nevertheless compellingly confronts the nature of abuse – both spousal and parental – and contemplates various modern (not only) American ails: fixations with appearance and status, emergence of the 24hr news cycle, quest for and price of fame, rigours and toll of professional sport, cult of personality, and, furthermore, American appetite for someone to love but equally – and perhaps more pertinently – the need for someone to hate. Whether I, Tonya seeks to exonerate the real Tonya Harding is debatable but it’s hard not to be somewhat sympathetic to Robbie’s tragicomic interpretation. As society increasingly expects public figures, especially sportspeople, to be near infallible role models, this is a timely reminder and realistic portrayal of human imperfection.

Astutely described as “the Goodfellas of figure-skating”, and infused with the hybrid directorial nous of David. O Russell and Martin Scorsese, I, Tonya certainly cuts a fine figure.

4 out of 5 threatening envelopes.

Josh Shirley - 2 hours ago
I had a 3 bedroom 2 bathroom townhouse in Melbourne 30mins from the city and the mortgage was $200 a week cheaper than any re... View
Vanessa McIntosh - 2 hours ago
Remi Fletcher Yvette berry ignores anything that makes her look bad If I was Kerry-Anne I’d be talking to Mark Parton MLA View
William Coats - 3 hours ago
Yes if a house is left empty in the ACT the owner is liable for land tax. View
Lifestyle 18

Garth Kirwin - 5 hours ago
they need to fix these lovelys up.if canberra loses these canberra loses it soul. View
Kathleen Lee - 12 hours ago
What! They are historical buildings. Don't be so silly. View
Glenys Callaghan - 15 hours ago
I love these buildings, they represent Canberra to me. I hope they are never pulled down as they are part of Canberra’s his... View
News 5

HiddenDragon - 8 hours ago
"...the government should let the market do its work and instead focus on cutting rates, charges and land tax as NSW has done... View
Ray Polglaze - 13 hours ago
Do you have evidence to support that assertion? View
Ray Polglaze - 13 hours ago
Barry Morris says "“Let the market sort it out – it will sort it out". But where is the evidence to support that confiden... View
Lifestyle 12

@The_RiotACT @The_RiotACT
Veteran organisations have welcomed the Federal Government's announcement that it will establish a Royal Commission into Defence and Veterans Suicide https://t.co/qpHIPzY1Vh (9 hours ago)