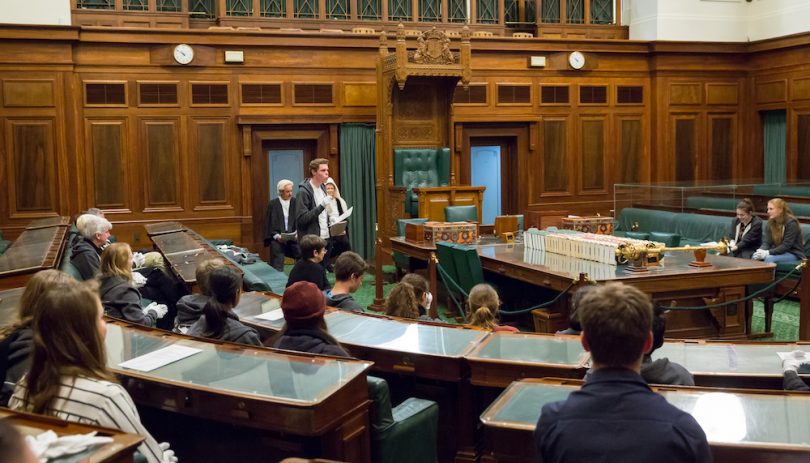 Imagine you’re a Year Five student in Wilcannia, or Karratha or Queenstown, or somewhere even smaller and further away. Maybe there’s only a dozen kids in your class or even your whole school.

Making the great Australian primary school pilgrimage to Canberra might seem like an impossible dream, requiring huge efforts, endless fundraising and massive community support. But while it will never be quite the same as feeling the wind whip off the Brindabellas, there’s now a fairly spectacular digital alternative for visiting the cradle of Australian democracy.

The Museum of Australian Democracy at Old Parliament House has made digital excursions a viable option for classrooms of kids everywhere and, during the time of COVID-19, for children stuck at home. And while 70,000 kids or more make it to MoAD every year, there will be many who never get there.

From a tiny room in the bowels of the historic building, green screen technology has made it possible to swoop and soar up the steps, through Kings Hall, into the House of Representatives and even the old Press Gallery, almost as if you were in the building.

Deborah Solway is the manager of learning at MoAD and says the work they’ve done to make the museum accessible to kids everywhere has paid added dividends during the coronavirus crisis.

“We did lots of research with teachers and schools about how to reach them,” she says, explaining that many schools want to bring their children to MoAD but are prevented from doing so.

“We’ve been able to reach out to those who can’t come by developing a digital studio.”

Deborah explains that the digital excursions are much more than interactive photos on a screen: students are taken through the building by museum educators who interact with teachers and students to create connections.

“We give them a part to play, maybe role play, we read some scripts, we play games or hear famous speeches in the chamber. The students feel like they are actually there,” she says. The studio walls are covered with scripts and prompts, telling stories like that of Aboriginal representation in Parliament.

During the COVID-19 crisis, the digital education system has enabled staff to interact with students all over the country and further afield.

“It’s been a bit like distance education,” Deborah says. “That means we can talk to students individually. We’re building an awareness of what MoAD is doing and now we can reach even more schools.”

Most recently, that’s included the Australian International School in Jakarta. Twenty-one students from Indonesia, Melbourne and Sydney connected with MoAD, with excellent feedback.

MoAD’s digital programs are aligned to the Australian Curriculum and while initially designed with classrooms in mind, they’re also suitable for students learning from home. The range of programs covers years K –12 and can be booked online here.

Coral Alexander - 11 minutes ago
Charlotte Ellen yuuus as if you could miss it. Paola Leon you in?... View
Caroline Le Couteur - 2 hours ago
Please don't release a heap of plastic rubbish. We have enough problems.... View
Tracy Parker - 3 hours ago
Perth do a duck derby every year where around 15000 are released, they re use them and collect them all at the end of the eve... View
Sport 19

Dave Horsley - 13 minutes ago
How would a club like Penrith convince quality players to travel 6+ hours every week plus training when they could just join... View
Sione Nonehh Taufui - 32 minutes ago
Sione Taufui ouaaa 😂😂😂 party party... View
News 238

Lucy Doan - 14 minutes ago
Pls plant trees like those in inner North or inner South, do not convert new suburbs into Belconnen-style please! View
Jarrad Job - 2 hours ago
Doug Hovi Have to replace all the trees they cut down to make room for all the solar farms in the future🤣... View
Robert Woodrow - 3 hours ago
Tahlia Bruce or possibly not .... View
Opinion 47

Troy Scott - 1 hour ago
I think I will boogs I was pretty good at it at 7 View
Steve Hugler - 4 hours ago
Troy Scott there’s still time for you to make a shot put comeback mate. 3 years and you could be at the Olympics!... View
Liam Timothy-Nesbitt - 6 hours ago
Tariku Fitzgerald-Holmes We’re up there... View
Lifestyle 30

Dilkera - 4 hours ago
Absolutely ludicrous to have a grand drive in entrance on Canberra Avenue, which is long past being a grand avenue. It is a c... View
News 35