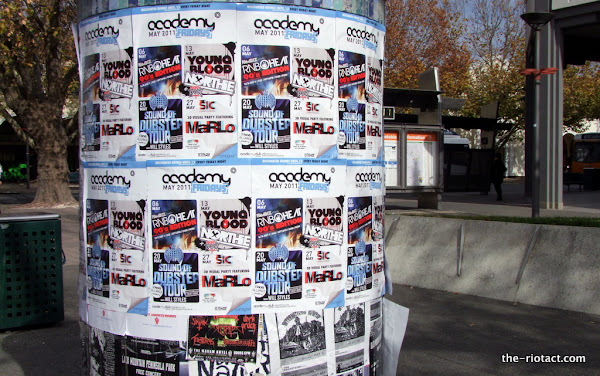 It’s going to be a big one!

What do you think is worth seeing and doing around town this weekend?

Fash n treasure market Saturday 21 May 10-4 Kingston Old Bus Depot Markets. Followed by Burlesque Bazaar at the Irish on Sunday, there’s going to be some well dressed ladies in Canberra next week I reckon.

End of the world

Make sure your undies are clean and you’ve turn off the gas.

End of the world

Make sure your undies are clean and you’ve turn off the gas.

Dubba Rukki at the Phoenix on Saturday night!

Come along to 5 hours of burlesque themed market stalls, performances, hourly raffles, hair, pin-up photo booth, and makeup demonstrations, all whilst supporting your local Burlesque Dancer – who make up the majority of stall holders peddling their wares!

On the big screen throughout this Bazaar will be the 1940’s themed show ‘Searchlights and Sirens’.

Entry is $5 which gives you 5 Kitka Dollars to redeem at any stall when you spend over $20 in one transaction.

The 50 free Showbags are back for the first 50 people through the doors when we open!

We are also welcoming Mila Haske to the stage at 12pm to serenade us all with his guitar.

With performances by:
– your Kittens of the Year –
Deb Delicious and Melina Fahrenheit – who will be signing postcards and posters for you all – they may even have a kissing booth!
– Betty Buttercake will be doing her cupcake routine
– Cherry Blossom and her scienterific maker
– plus some surprises

Raiders v Bulldogs Friday night, 7.30pm kick off. the Boys are looking to put together back to back wins for the first time this year. Should be a good match.

On Sunday 29th: (Advice is to consult Google to confirm)

John Grannall Memorial Day Show and Shine to be held at Grevillea Park – Entry $5 per car – All proceeds to charity -(Juvenille Diabetes). Sausage sizzle and coffee car available. 10am to 2pm

In 2011, lines will be drawn and the record will finally be set straight.

Since Lake Burley Griffin was officially completed in 1964, Canberrans have asked the question, which side of the lake is the best?

This year, that question will be answered.

Impro ACT in association with the Street Theatre proudly presents Theatresports™ – North v South. For three Sundays between 22 May and 5 June the Street Theatre will play host to competitive improvised theatre that the whole family can enjoy.

Theatresports™ is a fast and fun-filled theatre ride which combines wit, comedy, drama and fearless public performance. Given that Canberra houses some of the country’s quickest thinkers who are capable of providing extremely creative answers to the curliest of queries it is appropriate that Theatresports™ is used to settle Canberra’s most important question.

At the family-friendly time of 6pm, Canberrans will be able to enjoy a night of competition in which a cast of Canberra’s most experienced improvisers as well as the best new talent this city has to offer will represent their side of the lake with the same vigour as a State of Origin clash. Teams will compete in a series of challenges resulting in comedy, theatre and music created at will to the roar of the crowd.

A night of fun is assured so come along to Theatresports™ North v South and cheer your side of the lake!

Jordan Amber - 14 minutes ago
Anthony Gordo the club has to diversify away from gambling based revenue business models and as part of the ACT Government re... View
Peter Morales - 3 hours ago
David Malcolm WTF should they View
Peter Morales - 3 hours ago
The kid's ain't got a chance to voice themselves against a drug and gambling organisation especially when their backed by loc... View
Community 3

May Mac - 3 hours ago
The only reason we switched to landfill nappies was the struggle to keep line dried reusables from stinking of woodsmoke in w... View
Phillipa Leggo - 4 hours ago
Well done Olga Imbriano - lovely article👏👏👏 View
Vickie Quinn - 6 hours ago
Sarah Quinn looks good I'll have to check it out! View
Property 14

Ol L - 3 hours ago
NOVEMBER 11 2019 - 12:01AM Canberra is home to the biggest houses but the smallest units, new report shows... View
chewy14 - 4 hours ago
Capital Retro, The median price for apartments and townhouses is significantly less than for detached dwellings. So if the pr... View
News 1

Canberra Day Trips: 8 things to enjoy on a day trip to Crookwell