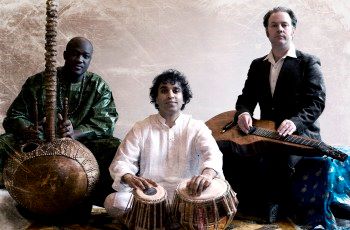 The Street presents in association with The ANU Exchange
Djan Djan.

FREE PERFORMANCE!
WHEN: Thursday March 11, 6PM
WHERE: The Street Theatre, outside under the trees (or in the theatre if it’s wet weather)

The music of Djan Djan stands alone as an uniquely new sound; intoxicating music steeped in tradition, yet brimming with innovation.
When the three musicians met in 2008, no one could quite have predicted the musical alchemy that would occur as a result.
Astonishingly beautiful and surprisingly natural, the conversational and virtuosic style that all three are renowned for is steeped in their respect of their cultural backgrounds.

Mamadou Diabate was destined to play the kora.
Cousin of legendary kora player Toumani Diabate, who was one of his most influential teachers, Mamadou was born and raised in the griot tradition of Mali; using music and oratory to preserve his people’s consciousness of their past.
From his Grammy-award nominated solo album, to his latest release Douga Mansa (King Vulture), Mamadou’s technical virtuosity and innovative approach have kept him in high demand internationally.

Bobby Singh spent much of his childhood in Mumbai studying tabla.
Recognised with a great talent, Bobby is the disciple of Aneesh Pradhan, one of the world’s most sought after tabla players.
Nurtured into a mature, internationally-renowned tabla virtuoso, both in traditional Indian and cross-cultural genres, Bobby has played with many of the top musicians in Australia and the world.

Jeff Lang has earned worldwide acclaim as a guitarist, dynamic songwriter and startlingly unique live performer, defying description and genre.
His intuitive and idiosyncratic instrumental virtuosity are supported by songs that expand the boundaries of traditional folk, country and blues, creating a new blend of music which is undeniably and deeply steeped in tradition, yet with its vision set on future horizons.
As an instrumental storyteller, Lang gives the guitar a voice and then makes it sing.

Carol Aspley Davis - 2 hours ago
We came to a BUSH CAPITAL. Canberra is a beautiful city of a blend of city and country - well it was! It seems greed to pay f... View
Julia Ross - 6 hours ago
Chele Forest What Canberra needs is some medium density stand alone townhouses where you own the land and there is no body co... View
Chele Forest - 7 hours ago
I'm looking forward to the day that I can leave this monstrosity that is this new Canberra and get back to a real bush capita... View
News 64

Janine Gilchrist - 7 hours ago
Definitely View
Yuri Shukost - 10 hours ago
Ankle monitors and home detention is the only way I’d support this. View
Isabella Goyne - 22 hours ago
If they’re in for non-violent offences, it should be at least considered. View
News 62

Emma A Holliday - 8 hours ago
Michelle Guerrero while it seems to make sense this isn’t about risk it’s about infrastructure. The coastal areas simply... View
News 2

Vindalu - 8 hours ago
Love the rain, shoulda been a frog! View
Deref - 23 hours ago
Nice to get some more rain. We need a LOT more, though, to get the dams up. View
News 26

Susie Deards - 15 hours ago
Elroy it is unusual - unless your stirring, that you feel we don’t already have a lot of development going on in Canberra -... View
David Brown - 20 hours ago
The only Canberrans who want this development are Barr and his cronies and developers. 😡 View
Mirjam Herzog - 1 day ago
Chris Cross' pro argument citing the rates income from diplomatic missions is a highly contentious issue as the concept seems... View
Lifestyle 12

MERC600 - 24 hours ago
Anna thank you for your concern re my car and a tree. But after I got a coffee and wandered back to the car the 15 minutes wa... View
Anna Bruce - 1 day ago
If you choose to disregard the medical directions given to you (a lot of that going around lately) and crash your car into a... View
News 6

Chris Allen - 1 day ago
The one thing that does worry me. When all this has settled down and we are allowed to behave and live our lives as usual, wh... View
News 2

Acton - 1 day ago
April Fools Day prank. Right? If not, share the pain Andrew Barr, instead of spreading it Cancel the next rates notice for al... View
News 4

Police have released two face-fit images of a man they believe is responsible for approaching two boys in Giralang earlier...
News 2

Heavy rain forecast over the next couple of days will boost the ACT's combined dam totals which now sit at...

Canberrans will soon see perspex barriers at the checkouts of Woolworths supermarkets as the chain moves to decrease the risk...
Opinion 22

@The_RiotACT @The_RiotACT
Could the huge numbers of unemployed Australians be deployed into public works projects that benefit us all? Economist Richard Denniss is asking what we'd build here in Canberra with a Depression style works program https://t.co/t5egvGtLkL (1 hour ago)

@The_RiotACT @The_RiotACT
Temporary powers to prevent tenants being evicted from their homes, ensure support for community clubs and restrict firearms are part of a wide-ranging Bill to go before the Legislative Assembly today. Find out how the Bill will affect you https://t.co/gnwjSMQFNi (2 hours ago)

@The_RiotACT @The_RiotACT
More help for ACT households and businesses is on its way after Chief Minister Andrew Barr flagged another economic stimulus announcement by the end of the week https://t.co/QhqmJLBiBe (3 hours ago)