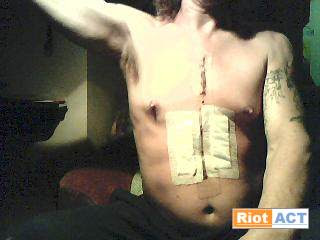 The Canberra Times brings word that the DPP has successfully appealed against the lack of a custodial sentence handed down by Chief Justice Higgins for the stabbing that created the above wound.

The ABC is also on the case informing us that the newer, tougher sentence is a six month suspended one followed by a one year good behaviour order for Tracey Elaine Campbell. Hardly seems worth the effort of the appeal but one supposes it’s the principle of the thing.

The ABC also reports that the DPP has had another go at the Chief Justice’s mercy, this time losing an appeal against a five year sentence for James Thorn found guilty of 36 offences involving theft and violence. In this case a lack of reasons for the sentence was attacked, and the Court of Appeal decided the Chief Justice’s silence was not a problem.

Well it would appear his stint in the slammer hasn’t dulled his enthusiasm for dishing out punishment..

He probably deserved it, though.

But, if Higgins puts people away in the big house, how will they ever have a chance to reform themselves?

Everybody deserved a 32nd chance.

But, if Higgins puts people away in the big house, how will they ever have a chance to reform themselves?

Everybody deserved a 32nd chance.

I thought “Justice” was his middle name… apparently it is only part of his title… honest mistake, I guess…

Higgins is out of touch and should have been sacked years ago.

So, commit my crimes in Canberra?

Stay where you are, it will be safer for you

So, commit my crimes in Canberra?

“Chief Justice Higgins”
Why is it THAT name keeps popping up?

When was Higgins supposed to retire?

Or do I have this wrong. I thought he was going

Cheryl Thuillier - 47 seconds ago
Was a great place. View
Stuart Ridley - 5 hours ago
The Prickle Farmer immortalized the Wine Bar for us in the 80s 🙂 View
Opinion 128

Jose Vega - 52 minutes ago
Because they think they can get more votes as per Trump and his extreme right wing mates in the USA. Just that no other reaso... View
Lifestyle 6

Tom Dale - 3 hours ago
As the APS "permanent staffing" model is still essentially based on the Northcote-Trevelyan Report of 1854 which re-organised... View
Vladimir Svoboda - 3 hours ago
CPSU has been advocating for greater homogenisation across pay bands for a decade and it was Labor policy at the last electio... View
Laurel Haskell - 4 hours ago
People leave the PS and start up their own industry because they KNOW the System..Consultants, Employment Industries, Care In... View
News 150

Raymond Evans - 3 hours ago
Canberra was so much better off when we were part of the federal government , since our local government started everything h... View
Anthony Fernance - 3 hours ago
If it’s only 2 weeks behind then they need to improve the mowing schedule a lot because grass don’t grow 4ft high in 2 we... View
Garry Dodds - 5 hours ago
When the Federal Government were in charge before self Government the lawns were great now it's touch and go..Only in the Sub... View
News 6

JC - 4 hours ago
No it so sure about your statement that longer travel times don’t bring more passengers. In the act we already have an exam... View
Capital Retro - 5 hours ago
Well, the future generations will be paying for it so it's the ACT Labor/Green government's legacy to them. And it's very muc... View
thatsnotmyname - 5 hours ago
Great to see this project finally underway. Very much needed and will be great for future generations.... View
show more show less
*Results are based on activity within last 7 days