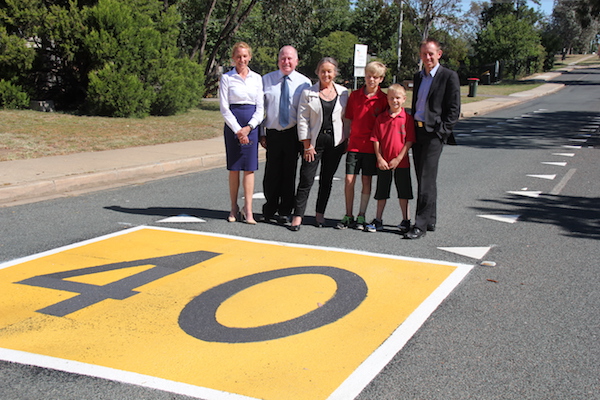 The ACT Government is trialling a new style of triangular road markings called dragon’s teeth to encourage safer driving on roads around primary schools at Macquarie and Macgregor.

The road markings are placed in pairs on each side of the road to provide a visual narrowing and increase the awareness of motorists as they enter school zones.

Earlier this year, the Government announced a road safety blitz on speeding around schools.

The dragon’s teeth road markings are among road improvements being rolled out as part of the Active Streets pilot program, which encourages parents to provide more opportunities for their children to make healthy choices about how they get to school.

Active Streets is being trialled in Macquarie, Macgregor, Latham and Mount Rogers primary schools as part of the Ride or Walk to School initiative. It ties in with the government’s push to encourage active travel across the territory.

Minister for Territory and Municipal Services Shane Rattenbury said his department had undertaken a site analysis at each of the schools which included walking, cycling and vehicle counts, a review of the current site conditions (i.e. crossings, signage, traffic conditions), and consultation with the school community.

“This analysis helped identify the improvements that would be trialled to improve safety at the schools and encourage active travel. The trial will be monitored over a 12 month period to determine the effectiveness,” he said.

“Routes to these schools from nearby drop?off points will also be highlighted with pavement markings that identify how many minutes and kilometres you have until you reach school,” Mr Rattenbury said.

Minister for Education Joy Burch said the new active travel infrastructure would make it easier for students to get to school on foot, bike, scooter or skateboard.

“Refresh your routine and try walking or riding to school for a few weeks to see if it suits your household,” she said.

“Active Streets is all about starting small – you don’t have to walk or ride the whole way and not every day is also OK.

“Students who actively travel to school arrive awake and alert, improving their concentration in class and ability to learn.”

I think the key problem is that the current all day school zone limits create a civil disobedience culture. If the law is an ass, even generally law abiding people will tend to disobey it.

The issue isn’t people driving at whichever speed they consider safe, the issue is that people are licensed to drive despite not being in any way trained in, nor tested on, their capacity for successfully making such an assessment.

I think the key problem is that the current all day school zone limits create a civil disobedience culture. If the law is an ass, even generally law abiding people will tend to disobey it.

If the school zone signage, 40km/h speed limit signs, crossings and the extra penalties that apply for speeding in school zones aren’t stopping people from speeding etc, what difference are some extra road markings and lowering the speed limit further going to make?

A much better idea would be to put that money into having actual police regularly in random school zones.

Ian McLeod - 2 hours ago
Charles Godworth yes I do and I also upgraded to three phase and will install a Zappi charger, but most won't need it. The po... View
Ian McLeod - 3 hours ago
Ben Garden which is what I'm doing and around town 2KW home charging is fine View
News 27