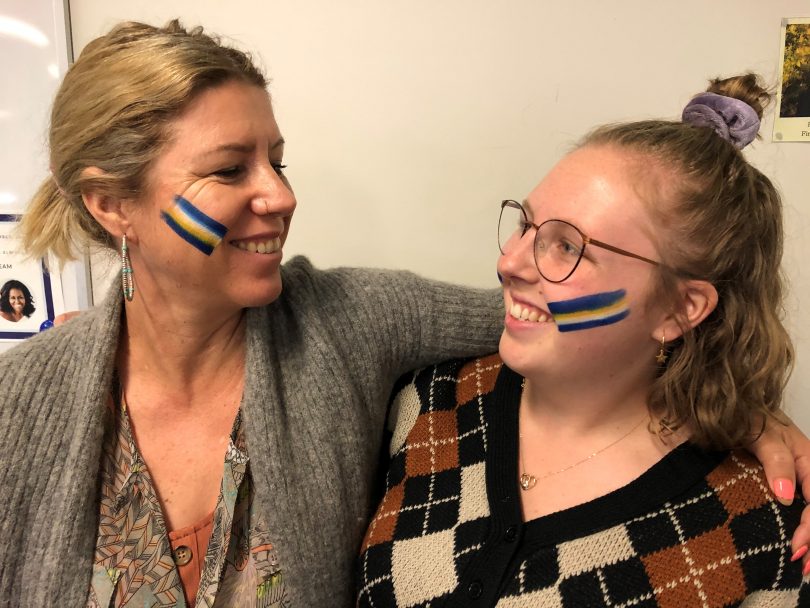 Canberrans are encouraged to turn up in droves for this evening’s (1 May) Brumbies semifinal against the Western Force. It’s set to be a cracking game – and it’s also a chance to support DVCS (the Domestic Violence Crisis Services), the chosen charity for the game.

Staff will be on hand throughout the night to spread an important message about their work and raise much-needed funds.

DVCS community development and engagement manager Alanna Davis will be there to cheer on the Brumbies, particularly Andrew Muirhead, a DVCS charity champion.

“We’ll be doing face-painting in the Brumbies colours down at the Mal Meninga stand-side as well as selling raffle tickets,” she says.

Fifty per cent of all proceeds from the raffle ticket sales on the night will go to DCVS, while the winner will go home with the other half.

READ ALSO: No excuses! It’s time to fill Canberra Stadium and back the Brumbies

A large contingent of volunteers and staff will be present to spread the word about just how important DVCS is to the community at large.

“We provide support services not only to victims of domestic violence but also to those members of the community who might use violence, when they want to stop.

“It’s important that we are seen out and about so that if people do need our services, they know where to find us and how to access them,” Alanna says.

Raffle tickets for the 50/50 prize can be purchased online in case you can’t make it to the game.

The winner will be drawn at half time and does not need to be in attendance to claim their prize.

Kick-off at 7:45 pm at GIO Stadium. Tickets are $12 and can be purchased online.

Kaija Murray - 1 minute ago
Wendy Whitnall I actually love the front end 💜 View
Wendy Whitnall - 28 minutes ago
Kaija Murray you should get the new BMW it looks great, I might have a look. Sounds meaty 👍 View
ChrisinTurner - 4 hours ago
Imagine the performance it would have if it was an EV. View
Community 4

Jorge Gatica - 45 minutes ago
Alex Troy Elsworth Adkins dog parks are an accident waiting to happen View
Alex Troy Elsworth Adkins - 56 minutes ago
Would love to see more dog parks. I know most neighbourhood ovals can already be used for this but they are not fenced which... View
Samuel Gordon-Stewart - 1 hour ago
Leave them alone! Lovely open green in our urban jungle space should remain lovely open green space as much as possible. View
News 16

Alex Nicolson - 2 hours ago
Albert Blair It did show the gubmint was trying to do something but I agree it seemed pretty ineffective. View
Scottie Zuxkerberg - 7 hours ago
I had no idea these vouchers were on offer, so a 100% total failure from my perspective... pretty much the usual from this in... View
Daniel Oyston - 7 hours ago
Scott Abela sorry, confused how free parking would fix it all 🤷‍♂️ View
News 35

Tim Evans - 2 hours ago
They were useless. View
Justin Alexander - 7 hours ago
Bekah Glaz there are drastic shortages in certain subjects (in some schools 70% of their “maths” teachers aren’t traine... View
Community 1

Flinders Doyle - 4 hours ago
Love Meating You . Great customer service and the quality is the best! View
Community 5

ChrisinTurner - 6 hours ago
Is this another example of land speculation like City Block 1 Section 96? View
Robert Mair - 7 hours ago
A increased employment base in Gungahlin will lead to more population occupying more high density residences leading to more... View
Property 10

Kate Eliza - 8 hours ago
Hristo we are building a farm house right now and can Def attest to the huge increase in costs of building materials.. and di... View
show more show less
*Results are based on activity within last 7 days

@the_riotact @The_RiotACT
Lake George is lapping at the highway after recent rain - that story and all the top #news and features in this week's newsletter. Subscribe now! https://t.co/jghXdK3ZbG (1 hour ago)

@the_riotact @The_RiotACT
Penelope Twemlow and Annika Reynolds are two very different individuals who are being celebrated for overcoming their own #trauma to give back to their #communities https://t.co/PrkjU2Ewnw (4 hours ago)