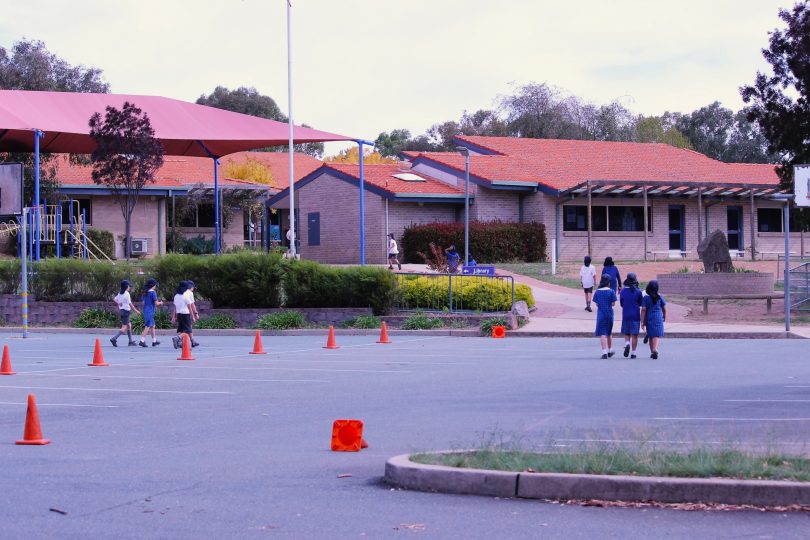 As schools await final advice from today’s National Cabinet meeting, the Association of Independent Schools of the ACT (AISACT) said all its member schools would follow the advice of health authorities.

The ACT Education Directorate is expected to announce final back-to-school plans for public schools in the Territory by the end of the week – likely after National Cabinet meets today (20 January).

AISACT executive director Andrew Wrigley said conversations with independent school principals in Canberra have indicated everyone is working very hard with their teams to look at “all sorts of scenarios” for the return to school.

“The preference from everybody is that kids return day one, term one … but there is, of course, a bit of healthy caution with that,” Mr Wrigley explained.

“We’re hoping numbers don’t get to the extent that it makes schools operating impossible.”

Mr Wrigley said principals are mindful of the impact of COVID-19 on staff who may become contacts or positive cases and whose positions will need to be filled.

“This does put extra planning constraints and stresses on schools, but they are all working through that,” he said.

While remote learning isn’t the “preference”, Mr Wrigley said it could be an option if required.

“We know what to expect now, and while it would be a different situation to last year, it is a known field now,” he said.

Above all, Mr Wrigley said schools would make decisions in line with the advice provided by the ACT’s Chief Health Officer and health authorities. This includes the use of rapid antigen tests.

“Our preference is that health authorities will set a policy position around the use of rapid antigen tests and this can be followed,” Mr Wrigley said.

“We’d prefer to see them used as a test-to-stay program rather than a screening tool,” Mr Wrigley said.

However, Mr Wrigley said some schools have acquired their own supplies of the test kits and have established protocols regarding their use.

Discussions took place in the ACT last year around a rapid antigen test pilot program, but this was dumped due to the impracticality of running such a program at the tail end of the school year.

After school went back last year, more than 30 schools in the ACT were impacted by COVID-19 intrusions on campus. At some points, entire school campuses were shut, while others could be managed by simply quarantining and testing affected cohorts.

An official back-to-school framework is expected to be agreed on at the National Cabinet meeting, covering protocols around the use of rapid antigen tests, as well as quarantine periods and guidelines for close contacts.

While NSW has yet to release its final plans on the use of rapid antigen tests, it’s been reported that students will be asked to take at least two rapid antigen tests a week under a plan being developed by both the NSW and Victorian governments.

The NSW Government has also suggested the expected shortage of teachers due to furloughed workforces could be addressed by asking retired teachers, principals and final year teaching sudents to fill positions.

Queensland and South Australia have delayed the term one return to school, although Prime Minister Scott Morrison has urged other states not to follow suit.

School teachers have been included in national guidelines under which they could attend work if identified as close contacts and are asymptomatic. However, it’s up to states and territories to implement these rules.

And yet no advice was given. They made schools and parents wait this long to only say “states are to make their own decision”…

Mr Premier, aren’t you aware that people who retire are older folk and more susceptible to Covid?

Someone in their mid 60s who has had their vaccine booster shot has less than 0.1% chance of dying if they get Covid.

So what is “crazy” about allowing these type of people to work in schools under controlled conditions if needed and they want to do it?

My daughter is a school teacher in one of our largest cities. Prior to teaching remotely, the absence of a teacher was dealt with simply by splitting those kids through the other classes.
With Covid, loading up classes causes overcrowding and increased risk to everyone. In theory, windows can be opened; in practice, outside noise invades the classroom and due to maintenance issues, windows don’t always open. Then there is “that parent”, who will still send their kid to school when they’re sick. There are significant issues within schools.

My daughter is stressed out about how Omicron will be managed, because of it’s contagiousness. She says that past outbreaks were not handled well.

So yes, extra “casual” staffing could help but the bigger issue is how they manage the risk.

Of concern, is that this whole idea of staff schools using retired people, comes from the NSW Premier. The same guy who believes NSW Health is managing; the “Let it Rip” guy. Qld have decided not delay opening of their schools due to their concerns over risk; an issue that the NSW Premier doesn’t see.

If I was offered one if these positions, I’d be looking very closely, school by school, as to what the safety measures are being out in place.
Even a < 1% death rate is significant, if you or a loved one is in that category.

“Prior to teaching remotely, the absence of a teacher was dealt with simply by splitting those kids through the other classes.
With Covid, loading up classes causes overcrowding and increased risk to everyone. “

And how did they deal with it before Covid?

What you’re actually complaining about is resourcing issues caused by excessive isolation requirements which are only now being reduced to more reasonable levels in line with the risk.

“My daughter is stressed out about how Omicron will be managed, because of it’s contagiousness. She says that past outbreaks were not handled well.”

Perhaps this is what is biasing your thoughts, previous outbreaks were far more risky due to the unvaccinated position we were in.

“Of concern, is that this whole idea of staff schools using retired people, comes from the NSW Premier. The same guy who believes NSW Health is managing; the “Let it Rip” guy.”

Oh, you mean the Premier that is balancing the issue the best out of all States?

Did you see that NSW hospital numbers have begun dropping and that they are likely either at or over the peak? And despite the bed-wetting from certain sections, they were not even remotely close to full capacity. NSW has over 1000 ICU beds and they’ve utilised 200 odd.

Whilst it’s no doubt been difficult, the strain on the system has been grossly overstated.

The risk of their own woefully underprepared health system? Maybe.

I didn't say less than 1%, I said 0.1% for a boosted person in their mid 60s, who would be your most relevant comparator. For younger people, it's far lower.

Kids need to go back

Kylie Russell not if it isn’t safe; our hospitals are already stretched

Kylie Russell no they don’t if it’s not safe for them or the teaching staff.

Luke Ashe the problem is the timing on when these 5-11yrs vaccines started being rolled out (this month).

A lot of kids won’t be due their 2nd vaccine until mid-March, meaning they will miss out in face-to-face interaction and teaching for most of term 1. They’ve already lost out on so much in the second half of last year

Fiona Hall would you rather they be not protected?

Luke Ashe I’d like them to be healthy *and* educated. I guess we can’t have everything 😪

Luke Ashe 3 actually between 0-9 years old total. out of 115,466 infections in the same age bracket. While its sad any child dies in any circumstance, it is negligible to the point that children’s social development and education not be destroyed any further.

Kris Peralta the school system won’t be in full swing

Grammar could build a quarantine facility, with all the Job Keeper money they scored, on top of their $7m profit last year.