Eight things to do around Canberra this weekend (3–5 Aug) 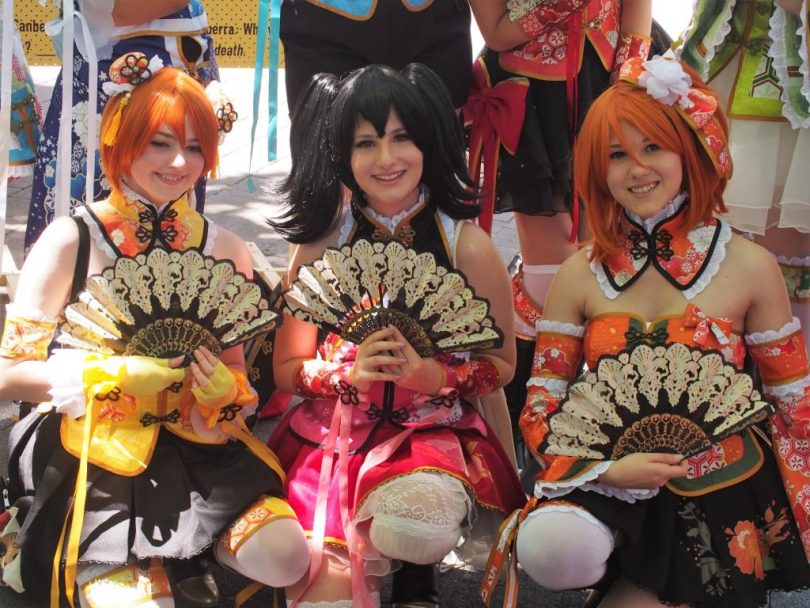 Anime come to life: Dress up as your favourite character and venture forth towards the Exhibition Park this weekend, just cos you can. Photo: Supplied.

Canberrans can look forward to a weekend of culture this week, starting with GAMMA.CON at Exhibition Park, a local theatre production of David Hare’s play about Oscar Wilde at the Courtyard Studio, a documentary film festival at Palace Electric, a never-ending evening at the National Gallery on Friday night and a visit to a local artist in her studio with the Portrait Gallery on Sunday. And it doesn’t end there: International Blues Music Day will be celebrated at Harmonie German Club on Saturday and if Blues isn’t your style, you can learn to make Macrame plant hangers at a workshop at the Botanic Gardens on Sunday.

Where: Exhibition Park
When: Saturday & Sunday, 10 am – 5 pm.
GAMMA.CON is a two-day pop culture festival which celebrates TV, anime, movies, books, comics, gaming, technology and collectables. There will be cosplay, board games, comics, crafts, video games, exhibitors, workshops and talks. During the day, GAMMA.CON is a family-friendly event but after the kids have gone to bed, there are a number of events where the adults can play including an all-ages Neko Nation event inspired by the anime nightclubs of Akihabara, and an over-18 Gamma@night event. Weekend passes are $45 for adults and $150 for a family of four. Day passes are $28 for adults and $95 for a family of four. Kids under 8 are free. Entry to Gamma@night is an extra $25 (includes entry to Neko Nation) and entry to just Neko Nation is an extra $15. All tickets are slightly cheaper if you pre-book online.

Where: Courtyard Studio, Canberra Theatre
When: Friday 7:30 pm, Saturday 2 pm & 7:30 pm & Sunday 5 pm.
Local theatre company, Mockingbird Theatre is performing David Hare’s provocative play about Oscar Wilde, The Judas Kiss at the Courtyard Studio this weekend. The play describes two pivotal moments in Wilde’s life: the moment when Wilde decides to stay in England and face imprisonment for gross indecency, and the moment after his release two years later, when Wilde’s lover, for whom he risked everything, betrays him. The play explores the consequences for Wilde in taking an uncompromisingly moral position in a world defined by fear, expedience and conformity. Directed by Karina Hudson and starring Chris Baldock as Oscar Wilde. Tickets are $44.95 for adults and $35 for concession, book here.

Where: Palace Electric Cinema
When: Friday, Saturday & Sunday
Stronger Than Fiction is Canberra’s documentary film festival. It started as part of the Centenary of Canberra and is now in its fifth year. The festival aims to bring Canberra audiences some of the most exciting and moving documentaries of the year. This year’s program includes:

Nearly half of the films on this year’s program are directed by women, and the festival has invited several of them to attend as guests including Gabrielle Brady, director of Island of the Hungry Ghosts, Christy Garland, director of What Walaa Wants, and Catherine Scott, director of The BackTrack Boys. Tickets for each film are $19 for adults and $16 for concessions. Check out the program and buy tickets here.

Where: National Gallery of Australia
When: 6 – 8 pm
To celebrate the latest incarnation of its NGA Play space, the National Gallery is inviting adults to explore artist Kellie O’Dempsey’s living sketchbook in this special, adults-only NGA Play experience. Kellie O’Dempsey is a performance drawing installation artist who develops site-specific installations which incorporate projection, video, collage, performance and digital drawing. For the NGA Play, Kellie has collaborated with composer Michael Dick who created a soundtrack for the space. On Friday night, this collaboration will extend to include a performance by Alison Plevey from the Australian Dance Party. Tickets are $30 for adults, $25 for concession, book here.

Harry Potter and the Trivia Night

Where: Limelight Cinema
When: 7 pm
Think you know the Potterverse better than anyone else? Then grab your wands and cloaks and join Limelight Cinemas for Harry Potter and the Trivia Night on the big screen. All questions will be about the movies and there will spells cast and other entertainment throughout the night. Pizza and alcohol will be available to purchase, with the proceeds of tickets going to Communities @Work. Tickets are $10, book here.

Where: Australian National Botanic Gardens
When: 10 am & 2 pm
Macrame is back! This ancient knotted textile craft which can be turned into plant holders, wall hangings, fashion accessories and many other items, instantly transports you back to the 1970s. Make your own macrame cotton plant hanger this weekend at the Botanic Gardens. Cost is $80 and includes all materials, suitable for people 15 and over, book here.

Where: Nicola Dickson’s studio
When: 2 – 2:30 pm
Nicola Dickson is one of the ten artists whose work is part of the Portrait Gallery’s current exhibition, So Fine: Contemporary women artists make Australian history. This Sunday, the Portrait Gallery has arranged a visit to Nicola’s Canberra studio to speak with her about her practice and to see preparatory works for her works included in the So Fine exhibition and new works in progress. Don’t miss this rare and intimate experience. Tickets are $10 for adults and $7 for members, book here. Once you have booked, the Portrait Gallery will send you an email with the details of where Nicola’s studio is and what time to meet there.

Rosalind Turner - 5 hours ago
Bring back the fountains, invite some food vans or pop-up restaurants, provide some shade and structure so it's not a wind tu... View
Michael Moran - 7 hours ago
It is form over function like everything the government does ! looks looks pretty but it serves almost no purpose . the packi... View
Jason Oneill - 8 hours ago
Bill Gemmell YES!!!!! View
Property 149

Emma Jeffries - 5 hours ago
Zac Bryant oh this is brilliant. The one. A jump arena for me, a pool and air conditioning for you and jasper and the landsca... View
Paula DeMoor - 6 hours ago
Woolaroo Warmbloods Sal Walker check out the stable View
Gillian Paull - 7 hours ago
Antonia Parkes I'm in, I'll go break open the piggy bank View
Opinion 14

Mick Guy - 7 hours ago
repairing the roads with the band aid policy?? View
Rainer N Palma Busacker - 8 hours ago
He could start with doing his job, stop playing with the train set. Call for a new contractor if this is not settled by the w... View
Julie Macklin - 9 hours ago
If it's my area, I don't care if it is. I could go weeks without a garbage pick up. And still my bin would likely not be full... View
News 1

Gail Cocksedge - 14 hours ago
And why do we care about this. Breaking the law has consequences. It's not a freeking resort, it's called punishment for the... View
Community 4

A few weeks ago, I drove my car across Commonwealth Avenue Bridge for the first time in months. Since the...
Property 149

Of the sporting events that we no longer have in Canberra, some had a long run of many years while...
News 2

The ACT Government has launched a trial $500,000 discount voucher scheme to boost consumer spending to help Canberra businesses in...
Breaking 0

Of the sporting events that we no longer have in Canberra, some had a long run of many years while...
News 18

Canberra Avenue has taken the dubious title of having the most motor vehicle accidents in the ACT, according to new data...
Opinion 14

Chief Minister Andrew Barr comes back to work today after a post-election break and needs to clean a couple of...
News 14

Eight things to do around Canberra this weekend (14–16 December)

@The_RiotACT @The_RiotACT
The 2021 Canberra International Music Festival has been launched. Check out the works and the artists https://t.co/ZmQ3ouVslr (6 hours ago)

@The_RiotACT @The_RiotACT
Hot in the City: Things are about to get a whole lot cooler in Dickson with the opening of Spilt Milk Gelato Bar https://t.co/dVR1sv6PNo (7 hours ago)

@The_RiotACT @The_RiotACT
The ANU has proposed major cuts to the School of Art and Design to overcome its unsustainable budget position https://t.co/3Z7ojx5bPY (9 hours ago)