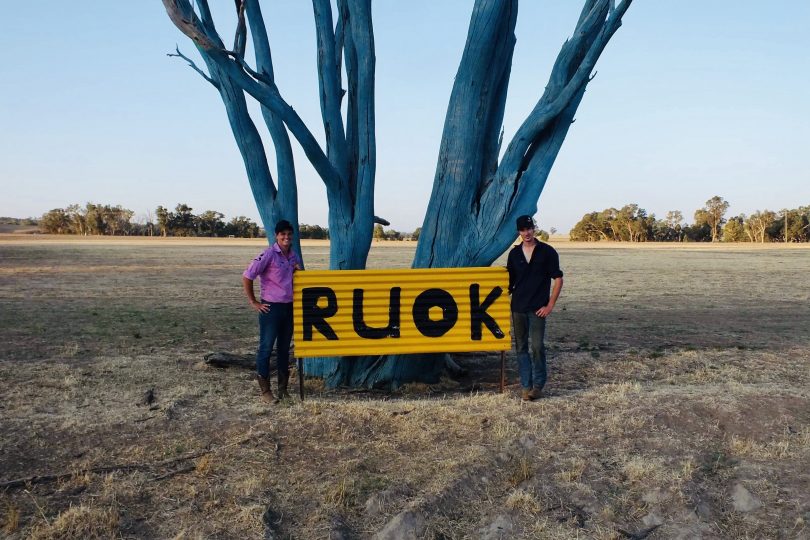 Ellie Burstal and Chris Carrie and the blue tree near Young that, like others scattered throughout the nation, has drawn attention to the issue of rural mental health. Photo: Supplied.

At the ripe old age of 23, Young’s Ellie Burstal has seen more than her fair share of naked butts.

She’d laugh if she read this. Her parents, both farmers, would look at each other and chuckle.

But this modest young woman was just named Young’s 2020 Junior Citizen of the Year because she dared to step outside the norm to raise awareness of rural mental health.

The award is particularly appropriate as the local government area plunges further into drought, and summer’s searing heatwaves continue to effect livestock, feed, water and hope.

Perhaps it is because she is the daughter of a farmer that she did what she did. In 2018, Ellie had seen one year of drought. A sudden spike in rural suicides, especially around Young, was a little too close to home. She and her partner, now fiancé, Chris Carrie, felt they had to do something.

What really got her attention was a cheeky social media post. Its owner was fifth-generation farmer Ben Brooksby who initiated The Naked Farmer in May 2017 to help raise awareness of depression and suicide in rural Australia. The concept went gangbusters, becoming a national phenomenon and earning Ben the title of social influencer.

Ellie decided to call Ben. That conversation got Ellie and Chris over the line to spearhead a project that was by no means easy: enlist a bunch of locals to bare all in a range of poses for – well – everyone to see.

By the end of the year the first Hilltops Naked Farmers Calendar was launched.

From its genesis to the bright, glossy final product – tasteful, of course – was the result of their cajoling and the collaborative contributions of many local people.

But Ellie and Chris got the response they wanted. Giggles started conversations and word soon spread – even as far afield as the UK via the Daily Express – about what had become a real plight among people living in rural areas of Australia.

“With suicide rates in rural areas 40 per cent higher than metropolitan areas and two-thirds of farmer suicides among those over the age of 55, usually due to financial stressors and drought, we thought now was as good a time as any to get people talking,” Ellie says.

“If we can all strip down and show all our flaws, you can do the same in talking about what’s troubling you.”

The calendar helped to raise $6000 for Margaret House, a refuge for sufferers of domestic violence, which is also located in Young.

She didn’t stop there.

Late last year the 2019 calendar was launched at Thuddungra Hall and the poses were most creative. Imagine, if you will, bicycles, fenceposts, trucks, barbed wire, welders, wool.

Ellie just laughs thinking about it. Especially the poor cyclists who had their photos taken mid-winter. This time the funds raised will assist with the establishment of a mental health safe house for men and youth in the area.

But there was something more. Something that has been a real eye-catcher.

A painted blue tree popped up beside the Bribbaree Road on the Burstal property a year or so ago. Under it was a sign asking “RUOK?”.

This the result of The Blue Tree Project, which started in Western Australia and now boasts some 350 blue trees throughout Australia, each painted in memory of a friend who lost their life to depression or had battled the illness.

For those who didn’t know what those four letters meant, it started a conversation, raised awareness and started a groundswell of support locally for RUOK? Day.

Now in the Hilltops region there are blue trees popping up everywhere.

Ellie’s is ready for a repaint. She and Chris are discussing the logistics while she holds her Junior Citizen Award, which she says she feels really honoured to receive.

TheSilver - 27 minutes ago
There is literally no good evidence that "social distancing" or "wearing masks" can reducing risk. At best you can say we don... View
phydeaux - 1 hour ago
Quite so. To put some rough numbers on it, 2017 was a peak flu season in which near 1200 people died, but the 4-year average... View
chewy14 - 2 hours ago
Can't remember when anyone said anything about compulsory flu booster shots? We are talking about Corona Virus, which is sign... View
Community 1

John Giacon - 2 hours ago
Big trees too near houses can be a problem - the tree or branches falling, and they make gardens impractical in many areas be... View
candlelit - 2 hours ago
I agree but (a) we need to think more about the kinds of eucalypts we plant (and having lost power for four days earlier this... View
Acton - 3 hours ago
Nonsense. The author negligently fails to acknowledge that gum trees are more prone to catching alight because of their oil c... View
News 4

@the_riotact @The_RiotACT
#Gungahlin's proposed #tennis centre is a step closer with a consultant hired to come up with a preferred design for the facility https://t.co/7htQ6Obh5D (31 minutes ago)