Embrace what the game teaches you: ACT Australian of the Year Alan Tongue 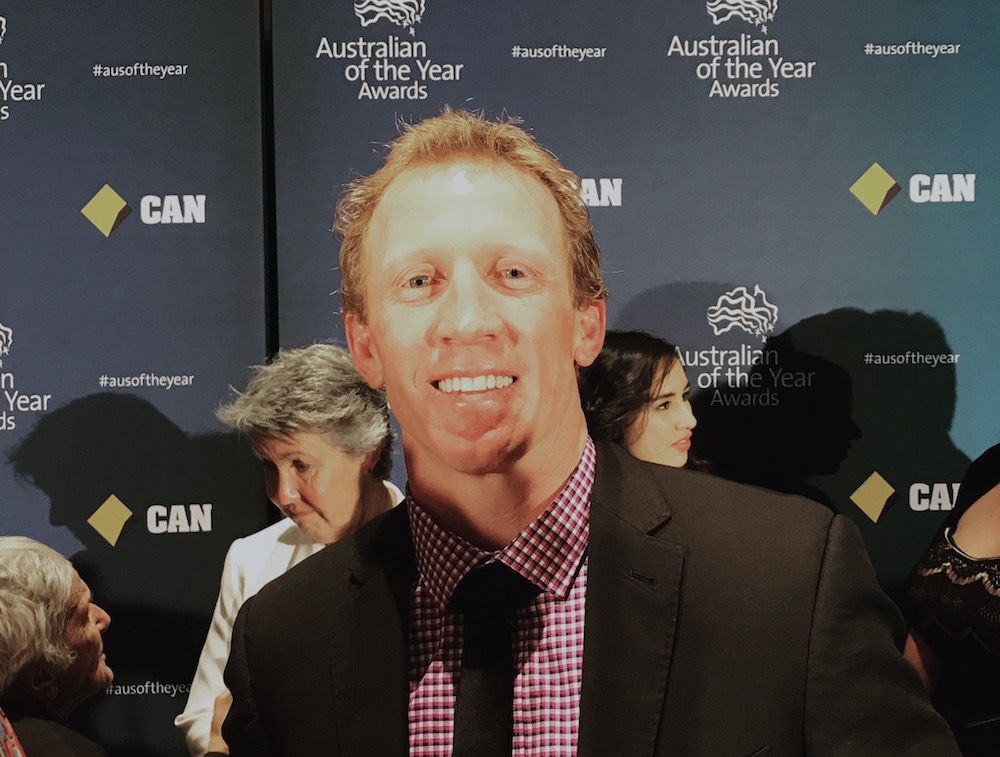 2017 ACT Australian of the Year Alan Tongue, the former captain of the Canberra Raiders, has attributed his success as a youth educator and mentor to the example set by his parents and characteristics shared by all great rugby league players including selflessness, respectfulness, honesty, loyalty and a commitment to hard work.

Mr Tongue was named 2017 ACT Australian of the Year during a ceremony at the National Gallery last night and will go on to represent the Territory as our candidate for the national award to be presented at Parliament House on January 25.

Mr Tongue, who was born in Tamworth, said he had been very fortunate to have great role models in his parents.

“They’re the people I want to be like, which is great, but then I just embrace everything that the game has given me,” he said.

These were qualities which young League fans and players should aspire to emulate.

“To me they are characteristics of great human beings, and so just living out and embracing what the game teaches you and trying to continue that in your life, whether it be during your playing careers or when you are finished,” he said.

“If you can do that, it sets you up for a really great platform to go into the next part of your life or show leadership.”

Mr Tongue noted that achievements in life need not be on a large scale to be worthwhile.

“I think sometimes we get too concerned the problems are all too big in the world for us and you know what, I had a bag of footballs and the juvenile justice centre was just across the highway from me, so I started next door, and that’s all this is, it doesn’t have to be huge, you don’t have to be starting rallies and protests and things like that, you can just start with your next door neighbour and help try and enrich people’s lives just one step at a time. 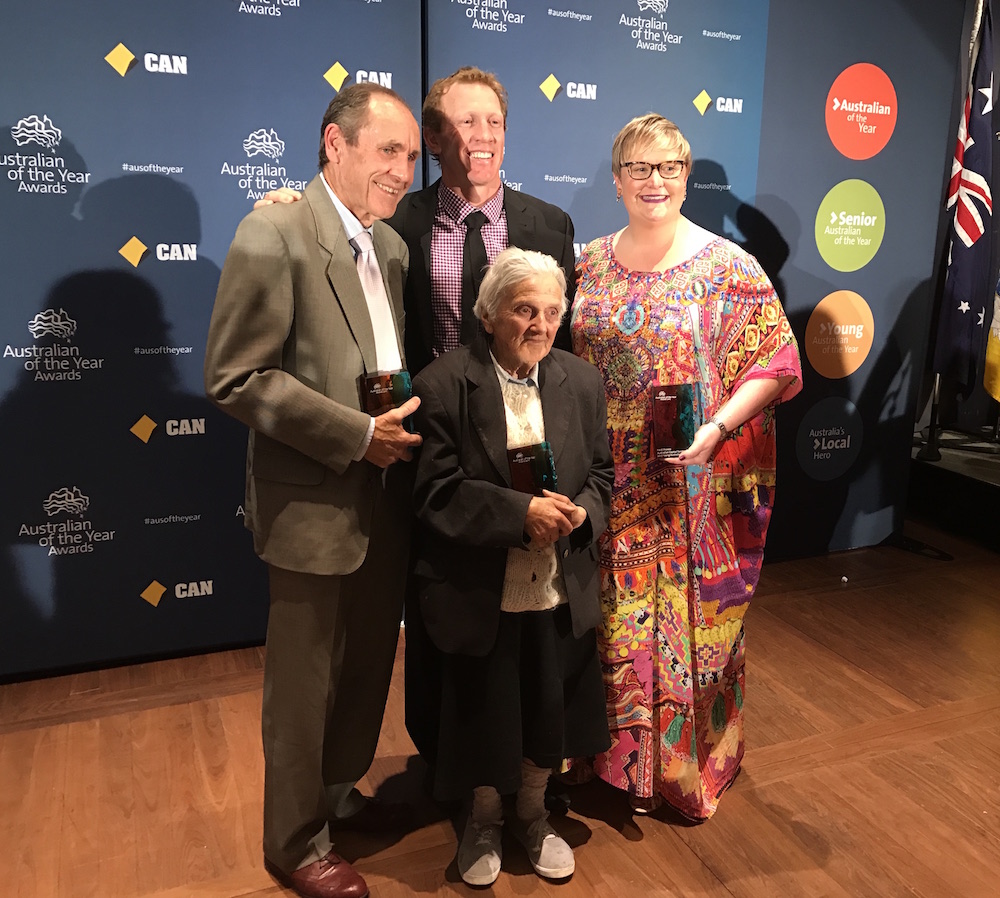 Ms Dabrowski took the RiotACT aside after the event and asked us to pass on two messages to readers: that we can prevent many health problems by eating good fresh food, especially fruit and vegetables (she is a vegetarian) and that we should be careful about how much we expose ourselves, and particularly babies and children, to electronic equipment such as televisions, computers and mobile phones.

See our Facebook Live coverage of the awards presentation here:

Here are the official biographies of the winners as published on the Australian of the Year website:

2017 ACT Australian of the Year: Youth mentor and educator Alan Tongue
After a stellar sporting career, Alan Tongue understands how to demand and inspire greatness in others. Since retiring from football in 2011, Alan began applying his talents to help young people at the Bimberi Youth Justice Centre make the most of the cards they’d been dealt. Alan created the Aspire program to rehabilitate young people and equip them with life skills to make positive choices. The program has since expanded to include prisoners at the Alexander Maconochie Centre, and disengaged youth in Canberra’s schools. Determined to tackle family violence, Alan travels throughout the ACT and NSW to educate football players and High School students about how they can eradicate family violence, and he is partnering with Barnardos to teach young people how to build healthy and respectful relationships. A friendly face at the Early Morning Centre for homeless people, Alan regularly serves breakfast to help some of the community’s most vulnerable.

2017 ACT Senior Australian of the Year: 71-year-old sports scientist and coach Dick Telford
Undoubtedly Australia’s most dedicated marathon running coach, Dick Telford has coached distance runners to eight Commonwealth Games medals, four being gold, as well as coaching Australia’s only Olympic marathon medallist, Lisa Ondieki. While his sustained coaching success has propelled him into the Sport Australia Hall of Fame, Dick’s pioneering research into the ‘physical literacy’ of Australian children is equally deserving of a gold medal. As the director of the National Lifestyle of Our Kids Study, Dick’s work has shown that quality physical education led not only to better health, but to better NAPLAN results. He’s now working on a plan to implement physical literacy programs into state education systems. The first sports scientist appointed by the Australian Institute of Sport, Dick is currently a professorial fellow at the University of Canberra’s Research Institute for Sport and Exercise and Adjunct Professor at the Australian National University, while volunteering endless hours to coach an elite distance running squad and Olympic marathon runners.

2017 ACT Young Australian of the Year: 29-year-old cystic fibrosis champion Heidi Prowse
When the man she loved told her he had cystic fibrosis, Heidi Prowse didn’t shy away. Instead, Heidi put her positive attitude and problem-solving skills to great use, volunteering for Cystic Fibrosis ACT, and, together with husband Andrew, organised the inaugural Santa Speedo Shuffle. The event, which started with seven friends braving chilly conditions to circle Lake Burley Griffin in speedos and Santa hats, has collected $360,000 in just four years. In 2016, a record 101 people participated, with funds raised providing practical support services, such as equipment, nutritional supplements and sport and recreation grants. Today, as the organisation’s Executive Officer, Heidi divides her time between administration, fundraising and meeting with families and medical staff. A woman of enormous capacity, tenacity and integrity, Heidi supports parents of newborns diagnosed with CF and consoles those suffering. Learning first-hand the debilitating effects of CF, Heidi is determined to make a difference to people living with this chronic genetic condition.

2017 ACT Local Hero: Soup kitchen volunteer Stasia Dabrowski OAM
Best known as the ‘soup kitchen lady’, Stasia Dabrowski has been serving Canberra’s neediest for nearly four decades. Despite passing the 90-year milestone, Stasia shows no signs of slowing down. Born in 1926 in Poland, Stasia’s family lost everything during World War II. Arriving in Canberra in 1964 with her husband and young family, Stasia remembered her own experiences when her teenage son came home talking about a homeless family needing food. They cooked pizzas for them and that began the helping of others. Stasia is up at 5am six days each week, driving her van around Canberra to collect donated food from companies, then distributes it. Stasia runs a mobile soup kitchen in Civic – something she’s done relentlessly, rain, hail or shine since 1979. She peels and cooks 180 kilograms of vegetables Thursday nights, feeding up to 500 people on a busy Friday night. A Canberra icon, Stasia gives not only food, but love, kindness and compassion to all.

For more information on the Australian of the Year Awards visit australianoftheyear.org.au.

Pictured above are ACT Australian of the Year Alan Tongue; Mr Tongue and the other category winners, Mr Telford, Ms Prowse and Ms Dabrowski; and Ms Dabrowski with ACT Chief Minister Andrew Barr, who presented winners with their awards. Photos: Charlotte Harper