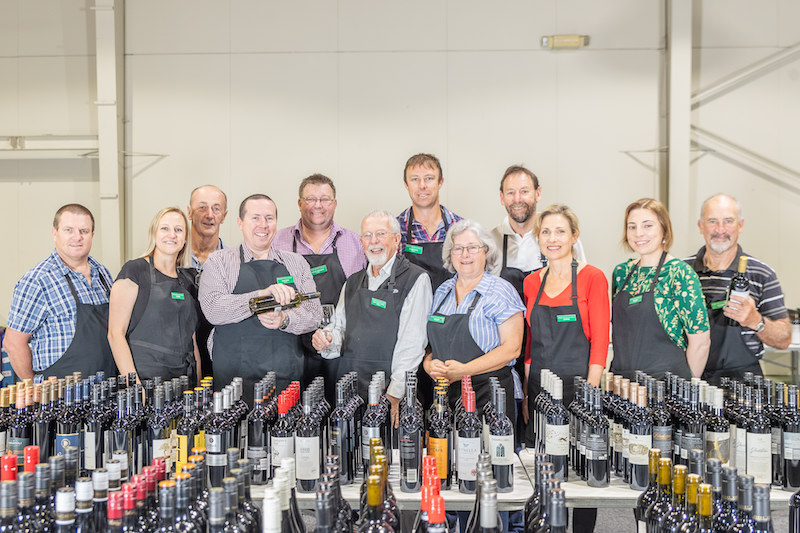 Judges and some of the assembled medal-winning wines at the National Wine Show of Australia. Photo: Michael Daniel.

Given the opportunity to taste your choice of more than 1000 of the finest wines in Australia, all identified by the nation’s most qualified judges, you will need a strategy.

For two hours this Saturday after the National Wine Show of Australia identifies the winners at Exhibition Park in Canberra, 300 people will have such an opportunity.

Chairman of the National Wine Show steering committee, Andy Gregory, says ticket holders can be assured the very best judges, including the Len Evans Tutorial Dux, will have made their trophy, gold, silver and bronze medal selections.

“We have gone a step further with Showrunner software to support the show, the online judging template, developed by the Australian Wine Research Institute,” Mr Gregory says. “That provides analytics post the show of how every judge and associate has actually scored wines through the four days of judging.”

On Friday (23 November) winemakers and others in the industry will taste the winning entries, ahead of the public tasting on Saturday from 3 pm until 5 pm at the Coorong Pavilion. As well as a connoisseurs’ delight, this will be an intense education into what wines are available to enjoy from across Australia’s top wine regions.

Mr Gregory says a previous event left an indelible comment with him.

“A young couple drove from Sydney for the National Wine Experience and they said this is the best-kept secret in Australia, and if it were held in Sydney there would be 10,000 people here,” he says.

Ticket-holders will each receive a Results Catalogue, which includes an overview of the judging from the judging chairman and a Riedel wine glass. This year’s chairman, David Bicknell is an accomplished winemaker and judge with a long and distinguished career, having judged at many regional and capital city wine shows.

The catalogue has been an invaluable buying guide for decades.

Wine is not sold at the tasting. Tasting is included in the admittance price.

Mr Gregory says the best advice is not to attempt tasting too many wines.

“If you are a Shiraz drinker, for example, you are potentially tasting over 200 different Shirazes to decide what you really like so you need to be discerning in the way you approach it. So in a big class like Shiraz you might only go with the top 10 gold medals and/or the wines you already buy,” he says.

“Go in with a sense of what type of varieties you actually like. Most people start with a fairly blunt, ‘I prefer white over red’ or whatever,” Mr Gregory says.

From there it is a matter of breaking down particular varieties and then going for geographic indicators, which are instrumental in judging.

From there you can proceed to regions, and then producers.

“The key is focus to get to the top three or four top wines you would go out and buy,” Mr Gregory says.

“That’s what we are all about, we as a national wine show, and all the federated systems which sit behind it, promoting Australian wine,” he says.

The Australian wine industry’s future depends on the skills of its judges.

Last year, acclaimed Hunter Valley winemaker Iain Riggs said a dramatic increase in sales of imported wine reflected a sophisticated consumer. “A better awareness of premium Australian wine and where it sits in relation to imported wine is essential to the industry getting its message out to the world,” Mr Riggs said.

Well before then, wine judge and industry legend, the late Len Evans established the Len Evans Tutorial to identify 12 gifted palates for training as show judges.

At the Tutorial, wine-makers, viticulturists, wine educators, sommeliers, industry sales peopled and wine writers assess once-in-a-lifetime wines judged as the best from all over the world.

Each year a dux is chosen, and they join other leading judges to preside over the National Wine Show, the country’s premier wine event which has been running since 1974.

This year, award-winning wines from qualifying shows around the country were whittled down to 1247 which qualified for entry by the outstanding National Wine Show judges.

The wine will be complemented by world-class provedore food from Pialligo Estate, Canberra, which has its own smokehouse and gathers the region’s finest produce, and goats and sheep cheese from Meredith Cheese, an award-winning producer in Victoria.

A limited number of tickets are available and booking is online.

Jennifer Elsey - 2 minutes ago
Such sad news❤ View
Judith Adraskan - 2 hours ago
A lovely man who will be missed. I worked with him as a colleague for over 20yrs & he was forever gentle, polite & kind. RIP... View
Food & Wine 21

Donna Chalmers - 17 minutes ago
Marcia Baker it will not matter......it's still the same!!! View
Frank Arnold - 1 hour ago
It was always a family treat in the late 60s. View
Catherine Firth - 2 hours ago
Pauline remember visiting after a few lemonades🤣 View
Motoring 42

chewy14 - 58 minutes ago
BJ, The outer suburb large blocks aren't being slated for densification, don't have good services and aren't as expensive. I... View
May Mac - 1 hour ago
"I think striking a balance is key." Yes. Not everyone who wants a freestanding house wants the work of maintaining a yard, s... View
Melänie Janė - 2 hours ago
Ridiculous article. View
Property 11