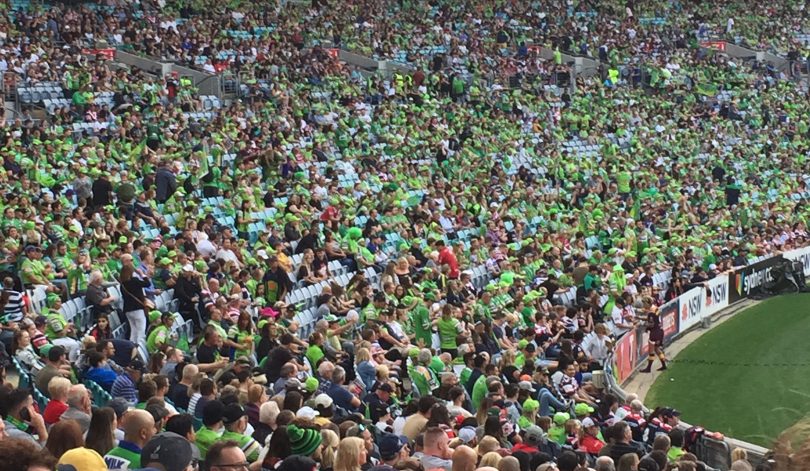 Sea of green for the Raiders: There’s more to connecting with fans than just winning. Photo: Jennifer Andrew.

People love winners, and the Raiders Grand Final season certainly filled Canberra Stadium but as new research shows there was more to it than the scoreboard.

The 2019 True North Research BenchMark Report looked at the emotional connection fans have with their sporting teams via a list of core values: respect, enjoyment, trust, pride and bond.

Significantly, according to the survey results, for fans that relationship wasn’t so much about winning, it was more about the team’s ability to connect with supporters.

We have seen that loss of emotional connection in the past in Canberra, despite what would have been considered successful seasons. There was a disconnect between fans and the Raiders during the Super League war, while the Brumbies, at times, have struggled to attract a crowd. Remember when the Cheetahs played the Brumbies in the 2013 semi-final?

The release of the report shows just how far the teams have progressed since then.

Of NRL teams, the Raiders jumped to fourth place in terms of emotional connection with fans, which is no mean feat when you consider the size of the city. The Melbourne Storm came out on top among the NRL clubs, followed by Souths, North Queensland, then the Raiders.

The Raiders’ connection with fans has taken a lot of hard work, including coach Ricky Stuart’s committed and sincere engagement with the supporter base and the Viking Clap movement, coupled with the team’s on-field success.

As an indication that winning isn’t everything, the Raiders were rated ahead of the 2019 premiers, the Sydney Roosters.

The club’s engagement with the media has also stepped up to a new level. For the first time the club held a pre-season media open session where the club outlined its plans for the 2020 season. These things are usually kept in-house, away from the media.

The Brumbies are ranked second among Australian Super Rugby teams, behind the Queensland Reds, in terms of emotional connection, but they acknowledge that the club needs to do more to win back fans.

The club, which finished one game away from the Grand Final but still struggled to attract big crowds, has made no secret of its desire to re-engage with its supporter base.

This year the Brumbies held an open forum to discuss the results of a fan survey. This generated many suggestions from fans, including players spending time with supporters after games.

What has been demonstrated is a conviction from both the Brumbies and the Raiders to put their supporters at the front-and-centre of everything they do. After all, without fans, there would be no team.

It is what has driven Canberra’s women sporting teams such as the Capitals and Canberra United for many years because they have less corporate sponsorship dollars bankrolling their clubs. They are highly dependent on crowd attendance for survival and because of this, they really know how to respond to those people who are willing to support them, win or lose.

Who is Tim and what makes him an expert.

Its because Ricky Stewart is a true leader and has inspired his team of formidable young men, that have truely engaged with the community. 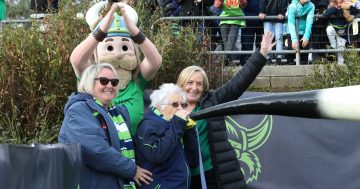