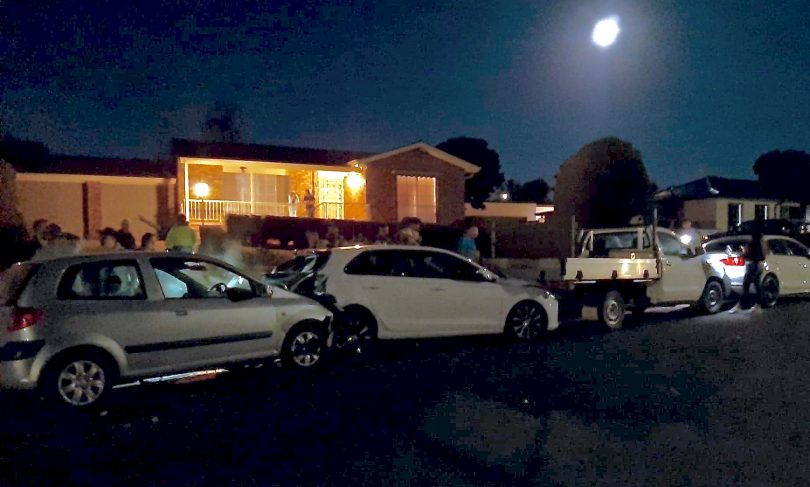 Residents of Brudenell Drive in Jerrabomberra after a car accident earlier this year. Photo: Supplied.

Residents of Brudenell Drive in Jerrabomberra say it will only be a matter of time before someone is killed or seriously injured on the street if motorists don’t slow down or permanent speed reduction measures aren’t put in place.

The calls came after an article published by Region Media on Monday (7 September) highlighted the plight of resident Jim Holmes (aka ‘Jerra Jim’) who has taken the Queanbeyan-Palerang Regional Council (QPRC) to task over two fines for illegally parking one of his two vehicles on the kerb to avoid accidents on the busy street.

Mr Holmes finished more than $3000 out of pocket after the legal battle over the parking fines.

He also says he has been made a scapegoat and there are many examples of other residents parking cars, trailers and caravans on the verge of the street.

READ MORE: “Morally I’m right, legally I got pinged”: the case of Jerra Jim versus the council

“It just gets me off the busy road a little. There have been many accidents along my section of road – all side-swipes or rear-enders,” he said.

Resident David Boucaut said there have been six accidents in the last year, including an accident on Monday evening (7 September) when the driver of a four-wheel-drive crashed into a tree while travelling too fast along Brudenell Drive.

“I was standing outside when it happened and was about to walk my dogs,” Mr Boucaut said. “An off-duty ambulance officer helped out and soon the street was blocked off with police and firies. The car was a write-off.” 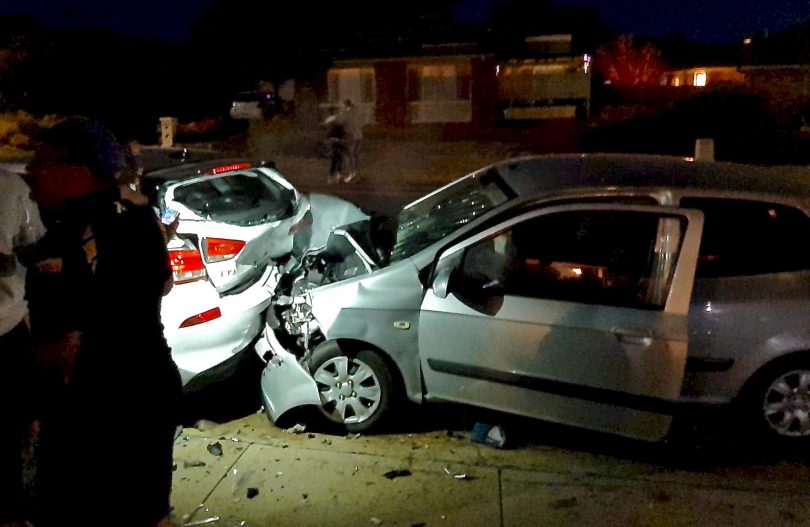 “People use the road as a speedway,” said one resident of Brudenell Drive. Photo: Supplied.

Mr Boucaut said he has lived at Brudenell Drive for just over a year and has seen at least five accidents from cars travelling too fast on the street where the speed limit is 60 km/h. Council also recently extended the 40 km/h school zone speed limit into Brudenell Drive to improve safety for road users during school time.

“People use the road as a speedway and after the last accident, I’m about to write to the council and say enough’s enough. I’ve seen people doing 100 km/h along that road, easily.

“There’s been a couple of accidents where people are pulling out of their driveway and someone was coming down the hill too fast. Somebody could get killed,” he said.

“The street needs a chicane or speed humps or a roundabout or something. No wonder Jim doesn’t want to park on the road.” 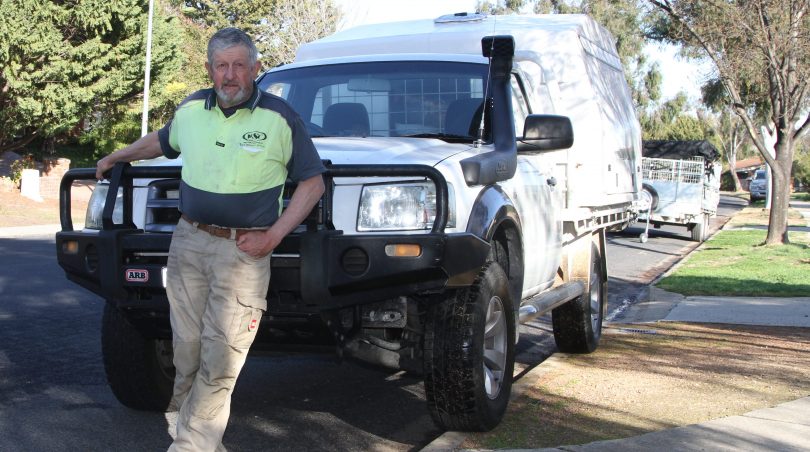 Jim Holmes and his offending vehicle, along with others parked on Brudenell Drive. Photo: Michael Weaver.

“In the morning and particularly of an evening, it gets very bad,” he said. “It’s about a 100 metre section of the street that’s a real black spot.”

Mr Holmes has also written to police in Queanbeyan and says he would be more than happy to discuss the matter with somebody from the council.

A QPRC spokesperson said some residents had raised concerns about motorists speeding on Brudenell Drive and that Mr Holmes is welcome to have any fines reviewed by the NSW Revenue department. 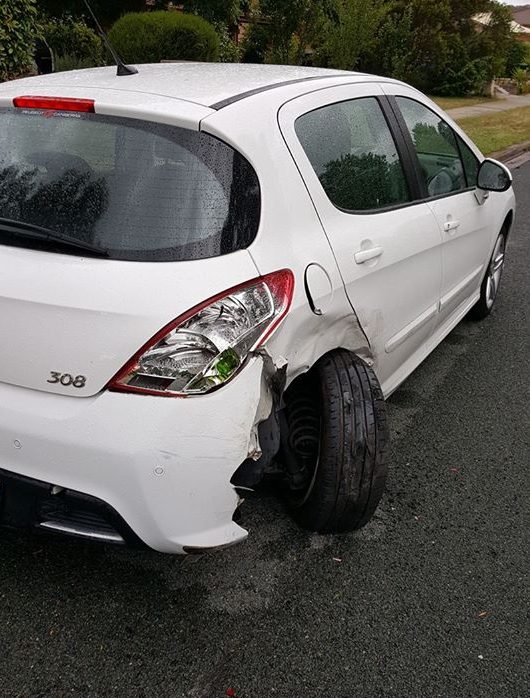 A car after being side-swiped on Brudenell Drive in Jerrabomberra. Photo: Supplied.

A QPRC spokesperson told Region Media it is not currently considering any measures such as speed humps or chicanes beyond deployment of a speed trailer that provides a visual reminder to drivers of their speed and encourages them to keep below the speed limit.

“All 12 sites achieved a reduction in the 85th percentile, which is the speed that 85 per cent of drivers choose in the absence of any interventions.

“Speed reductions have ranged between 2 km/h and 8 km/h and a reduction in the percentage of vehicles exceeding the speed limit ranging from 10 per cent up to 35 per cent.”

The spokesperson also said their speed safety project for local roads was a category winner at the 2020 National Awards for Local Government and achieved a reduction in excess speeding at 51 sites in the Queanbeyan-Palerang shire.

If the photo above is how Jim parks I don’t know why he bothers as it would make no difference what so ever to have 5cm of tyres on the gutter!

However if he parks half on and half off when the Riotact camera isn’t around then it is obvious why he has been targeted for parking fines as the front of his vehicle would be over the footpath!

As for the core issue here it isn’t one of parking it is one of dangerous driving.

QPRC needs to step up. I used to live in Brundell Drive – the Speedway. I now live in Tennyson Dr East Qbn where roadside parking is also dangerous.

jwinston - 3 hours ago
I wholeheartedly agree with your summation here Chewy14. This is a bit off subject but I’m very interested in the comment y... View
keek - 4 hours ago
I think you believe light rail to be a far bigger election issue than it actually is. I've found that outside of here, very f... View
Community 13

Ol L - 3 hours ago
Brindabella s? Would look like nothing recognisable as there hardly the Himalayas View
Capital Retro - 1 day ago
".... An emblem showcasing medieval queens, crowns, and castles, doesn’t represent 21st century Canberra..." We have all th... View
Stephen Saunders - 1 day ago
Symbols do matter. The British monarch is the white hereditary chief of the Church of England. An emblem showcasing medieval... View
Food & Wine 1

TimboinOz - 16 hours ago
How to spend money, in public? AKA Konspikewus Konsumption. Look at ME!!!!! YAWWWWWWrrrrm. Build a veggie garden, grow your o... View
Food & Wine 1

chewy14 - 17 hours ago
BJ, You aren't meant to bring these things up. The only information allowed is positive. It's efficient, it's modern, it's vi... View
chewy14 - 18 hours ago
JC We don't need news reports, transport Canberra publish the patronage reports. BJ's figures are accurate. https://www.trans... View
bj_ACT - 19 hours ago
Just for the record, the light rail business case for expected daily patronage was quite low in 2019 and we beat that in the... View
Property 6

Someonesmother - 19 hours ago
Gee why does this not surprise me? Look who the developers are. 43 car parks in a completely congested street, using Canberra... View
News 17

JC - 19 hours ago
China may well be a developing country with many that are very poor. It does however have a massive (millions) middle to uppe... View
keek - 22 hours ago
Nobody held a gun to the Chancellors head and said "You must rely on income from foreign students and expand to a level where... View
chewy14 - 1 day ago
JS9, Whilst I would agree that the Federal government has set the framework and playing field that the Unis are operating in,... View
News 4

“Morally I’m right, legally I got pinged”: the case of Jerra Jim versus the council

Probing the polls: narrow roads, and a man’s right to park on the nature strip

@The_RiotACT @The_RiotACT
Canberra Good Food Month kicks off next week, headlined by a culinary quiz at The Boat House, a pop-up at Bar Rochford & a gourmet dinner hosted by industry young guns https://t.co/CdwXqXozH6 (27 minutes ago)

@The_RiotACT @The_RiotACT
Canberra's second repatriation flight of the year is due to arrive from Singapore on Monday night with between 150 and 180 Australians on board https://t.co/vNY4C8cvTn (1 hour ago)