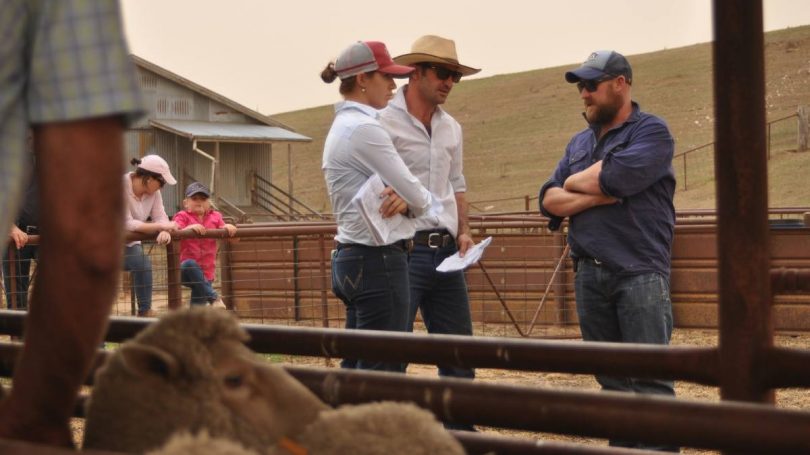 Farmers have traditionally shared few words over the fence unless it involves rain – or lack of – but a competition in the NSW Southern Tablelands is initiating conversations about breeding and management to improve flocks.

Talk of feeding programs, bloodlines and micron can be overheard as farmers tour properties entered into the Southern Tablelands Flock Ewe Championship, where the region’s best merino ewes are on show.

The judges make their assessment and then open up the conversation to the crowd for feedback and ideas.

“Visiting other people’s farms always sparks ideas in your own mind, and you learn so much from the discussions,” says 2016 winner and current competitor Michael Lowe, from ‘Innisvale’ in Crookwell.

“It’s a communal conversation and people do criticise, but it’s meant to be constructive.”

As well as hearing about the latest sheep industry innovations, farmers are also able to benchmark their merino ewes against other competitors.

Those in the championship are already considered the best-of-the-best in the region as they must have won their local flock ewe competition to take part.

Michael is a fourth-generation farmer who won this year’s Crookwell Flock Ewe Competition, which he’s been entering since it started.

“We like a wool-cutting sheep and one that produces more of a traditional style of wool, a fine-medium style,” he says. 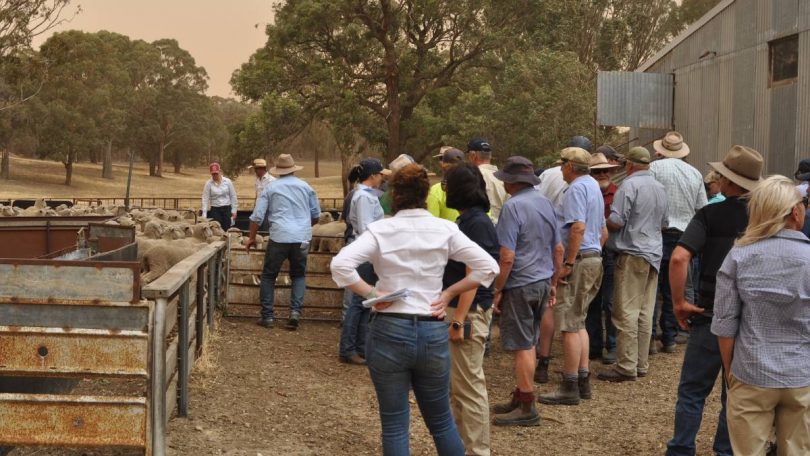 “During the years, I don’t think our breeding philosophy has changed a hell of a lot, but we’ve moved along with how merinos have changed in general. In the 1970s, they were covered in skin and wrinkles and we’ve all moved away from that.”

Last year’s competition was also an opportunity for Southern Tablelands farmers, who were facing one of the worst droughts in history, to get off their property and catch up with mates.

“A lot of us farmers don’t get to see each other very often, and socialising and having a joke is important,” says Michael.

Farming conditions in the past 12 months have significantly improved thanks to much-needed rain. Campbell Basnett, from Naamaroo Pastoral Co. near Gunning, hopes he might win this year’s championship.

“We don’t want the biggest animal out here, we want a medium-sized ewe because the bigger the ewe, the more she eats, with plenty of wool,” he says.

Like Michael, Campbell appreciates the opportunity to benchmark his sheep against others and see how other farmers manage their properties.

“I’ve entered this competition since it started and I’m in two other benchmarking groups,” he says. “Traditionally, farmers don’t share their ideas, but I think the new generation is much more open to sharing ideas for the betterment of everyone and the industry.”

The championship is also paving the way for the next generation of sheep judges, with 17-year-old Hain Van Eyk joining as this year’s associate judge alongside judges Hamish McLaren from Nerstane Merino Stud in Woolbrook, and Simon Bahr from Meadow View Merino Stud in Henty.

Hain lives in Uralla and won the junior judging competition at the Armidale Show. He has plans to work on his family’s property, which runs beef cattle and White Suffolk sheep, after year 12 or university, and he has been enjoying learning how to identify winning sheep.

“I’ve been taking part in the junior judging at the Armidale Show since I was in year seven,” he says. “My confidence has grown a lot. The first time was daunting – I didn’t know what I was talking about and didn’t want to be picked, but now I want to be picked and I’m trying to use the correct terms to make my case stronger.”

The flock ewe competition will be the first time Hain has judged a flock of sheep instead of just a handful of them, but he says it will grow his confidence ahead of the junior judging at the Sydney Royal Easter Show in April.

Around 70 students from six different high schools in the region will take part in the junior judging at the Southern Tablelands Flock Ewe Championship on Friday, 19 March. They will learn how to judge sheep before visiting the eight properties in the championship to practice.