Excellence in stories and coffee at Queanbeyan cafe 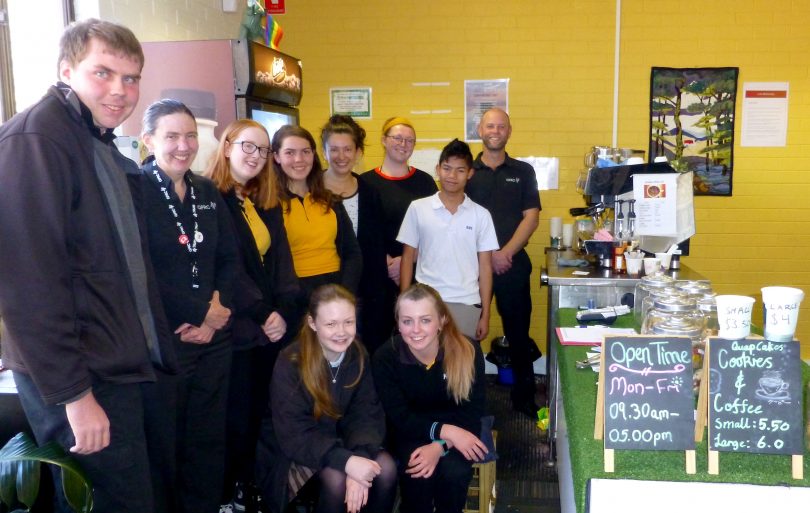 Every day, a group of people can be found in the Queanbeyan Library making what would usually be considered too much noise.

They are chatting about their weekend and discussing their lives while drinking a coffee or hot chocolate. Some are even reading.

Welcome to the Storybook Cafe.

The group represent the changing face of traditional libraries and it’s a model that has seen the Storybook Cafe rewarded with an Excellence Award in the Community Development and Services category at the NSW Local Government Excellence Awards ceremony in Sydney.

What began as a lightbulb moment is now the template for a similar version in Goulburn and Eden, where participants can gain meaningful employment in the hospitality industry.

Queanbeyan-Palerang Regional Council’s (QPRC) Community Program Coordinator, Terry Campese, said the initial idea was to get a grant for a mobile coffee cart. When that was unsuccessful, the team discussed the Queanbeyan Library and said, “why don’t we just have the coffee shop there?”

“This initiative has been very successful, and we’ve had about 40 young people come through the program to become trained baristas. Most of these have now moved into employment in the industry or similar paid work,” Terry Campese said.

“We are proud to win this award and it is a great recognition of the benefits the cafe has had to people’s lives. Not only is it a place for people to get experience but a place to feel safe and socialise.”

Pip Vann is one of the baristas gaining invaluable skills at the Storybook Cafe. After one month on the job, Pip is now in her first week as a supervisor where she manages stock and staff rostering. She also makes a great coffee.

“This is a wonderful opportunity for me to add to my resumé at a time when young people find it so hard to get employment,” said Pip.

“Anyone who comes here can expand their skills with the freedom to lose their footing and then find it again.”

The cafe was also established with the support of Axis Youth Services, which is a safe, supervised, drug and alcohol-free recreational space for people aged 12-25.

“It’s a great, safe and inclusive space, and everyone loves it here. It gives people a place to belong,” said Kelly.

The next chapters will see the profits from the cafe paying for a Certificate III in Hospitality, where baristas will mentor the next intake of people coming through.

Meanwhile, the cafe has also been shortlisted for the national local government excellence awards in Darwin this week.

The next chapter in the Storybook Cafe is to be continued.

Paul Mills - 19 minutes ago
Too many medium density developments with zero design merit. Welcome to Northbourne canyon. View
Lynne Staunton - 2 hours ago
Julie Arnold but at least when the next big fire comes through that way there us now a decent fire break to protect the inner... View
Linda Johnston - 5 hours ago
Nick Anderson I think it goes back earlier than Forde. I remember going into parts of Tuggeranong and having absolutely no id... View
Sport 5

The Best Coffee In Canberra

@The_RiotACT @The_RiotACT
The planning authority has rejected claims that it is a toothless body unwilling to fight for its decisions in the courts, defending its deal with Zapari that will see the company's controversial Coombs development proceed. Check out what changed https://t.co/16ycDV9SUb (20 minutes ago)