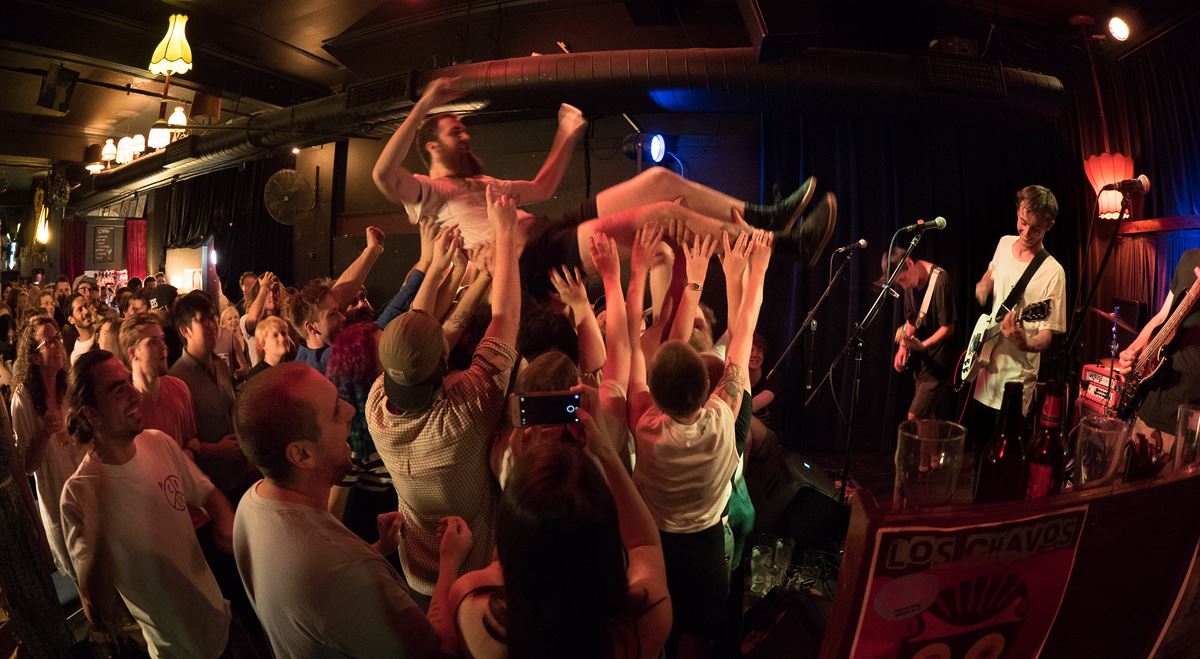 “Nothing ever happens in Canberra”

“No good bands ever come here”

“There’s no female presence in the music scene”

…And my personal favourite: “we need more venues in Canberra”

I might get to the last one in a later article, (if they’ll have me back) and Duncan Stuart already wrote a good article called “Canberra’s Rock’N’Roll Women” here, which tells of some of the amazing women in our scene.

So here’s my take on the first three quotes: The people who say this garbage have rocks in their heads. There is so much sh@t going on in our town, and these people are totally oblivious. They’re busy sitting in their houses, complaining on facebook about how there’s nothing fun to do. So, the next few paragraphs is for them. If they’re your mates, let them know! If it’s you, sorry, but this is going to sting a little.

You’ve gotta support the little people. The locals. Your mate’s band. Go and watch that rock band you didn’t see on Australian Idol. The one Chris from HR has been harping on about for three months. They’re playing at Transit bar on a Thursday night. They’re probably supporting a band you’ve never heard of, who’s travelled from the US and took a risk on Canberra, to play their music to the other bands and the sound guy if you don’t turn up. Take a risk! Pay the f@#!$ing ten bucks!! If you don’t, bands will get discouraged at a poor turnout, and skip Canberra next tour.

Sure, there might be bands that you just don’t enjoy. No-one expects you to continually show up and have a bad time, but if you don’t give them a chance, there really will be no live music in Canberra. Believe it or not, most touring bands lose money coming through here.

Here’s how it sits for me: There are a damn plethora of local bands who are killing it at the moment, supporting bands from all over the world in venues the size of your living room!

I don’t want to hear your “I would, but it’s on a Thursday, and I’ve gotta work Friday” cr#p! Mate, have you never been tired or hungover at work? Give me a break! This band sold 300 tickets to Melbourne on Wednesday, and the Sydney and Brisbane shows this weekend are already sold out. Sorry, but we’ve got the Thursday, and if you don’t come, they won’t come back next tour because you’re gonna let a good night’s sleep RSVP for you!!

Come outside your comfort zone for a minute! Check out something new. Maybe you’ll find your new favourite band, maybe you won’t. But you can go to work on Friday and interrupt the Australia’s Got Talent conversation at the water cooler to tell them about how you’re helping the local arts community!

No Front Fences Festival is happening over three days (March 17-19) and features a bunch of bands from Canberra and interstate.It spans across a few genres, so there really is something for everyone.

Capes (these guys get around!) and Revellers are playing with Panhandler (from SWEDEN!!) and Tiger Can Smile (from Adelaide) at Lobrow on the 29th of March (yeah it’s a Wednesday).

Until then, be good to each other!

Some years ago I suggested to the powers that be (were) that the old quarry site in the Woden Valley might make an interesting outdoor performance venue and even become a colourful tourist draw for concerts.
Nothing came of my suggestion and now a great deal of money is being spent to provide access to the quarry so that it can be filled with our rubbish in future years. Oh well!!!!

There was a band called Winston Surfshirt from Sydney playing outside at the National Museum on Sunday afternoon. Very pleasant.
Lloyd Spiegel next Sunday at the German Club. $15.
Turkish band BaBa ZuLa played at the Abbey on Friday night, I was offered free tickets to it at the last minute and stupidly said no. I should have gone, that looks like it would have been pretty entertaining.
Previous Friday I saw Reg Mombasa playing at the Polish Club.
Sorry Mum at The Basement on Thursday night could be a fun blast from the past for anybody willing to travel to Belco.
There is definitely plenty on, and I’m with Joel – don’t worry about rubbish that’s been on Pop Idol, don’t only listen out for big name acts that play in boringly over-large venues and cost too much, go and see real music by people you’ve never heard of playing at The Phoenix, The Austrian Club, Durham Arms, The Polish Club, Transit Bar, etc….

And come check out a new Canberra band, HighView at Transit Bar this Friday 10 March. They just released their EP yesterday (available on most platforms).

Support the local scene. Thanks for the article!

Denise Bourke - 4 minutes ago
We love the work of mower teams and their supervisors. Keep em coming. View
Trish Hunt - 59 minutes ago
We just had a week in Canberra visiting our son and we commented on the long grass everywhere we went. I ask if there was a m... View
Robert Curtis - 1 hour ago
Ken couldn’t happen in the Watermelon Republic of the ACT! View
Public Sector 22

Rick S Tar - 59 minutes ago
Michelle Kwan a better camera and or drone would of captured the moment better. Cyber Monday still has some sales. View
Charlie Williams - 2 hours ago
In my time it was up and down all the time and didn't really seem to have anything to do with local rainfall- pub talk in que... View
Charlie Williams - 2 hours ago
Wayne Lutter don't forget Tim flannery - it will never rain again! View
Opinion 58

The best cosmetic dentists in Canberra