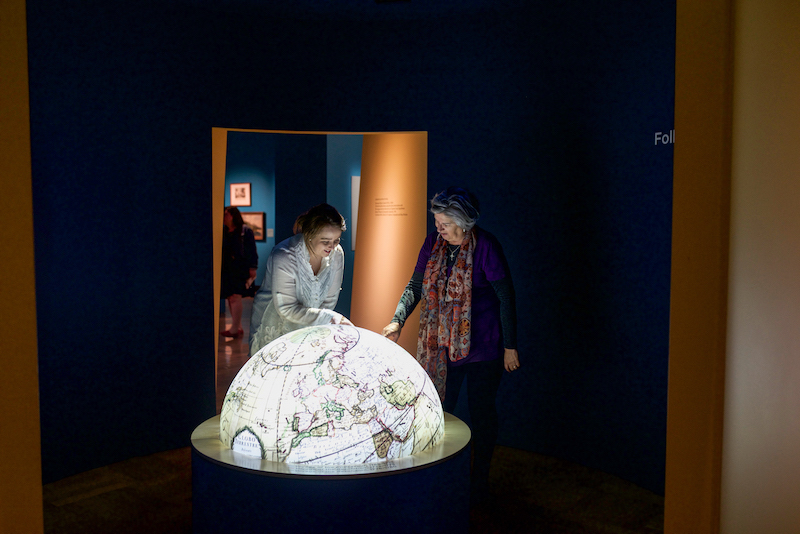 A comprehensive display accompanies Cook and The Pacific exhibition which is open at the National Library of Australia until February 10, 2019. Photos: Supplied.

If a world-class exhibition at the National Library of Australia centred on three voyages of Captain James Cook is not the definitive record of the great explorer’s place in history, it must go close.

The exhibition, Cook and the Pacific, which runs until February 10, 2019, not only has material unseen previously, it includes how he has been studied over the centuries that followed his epic travels 250 years ago.

Exhibition curator Dr Susannah Helman says even for people with little knowledge of Cook, the exhibition’s broad aim contains surprises. As well, for those with extensive knowledge of Captain Cook, many aspects of the exhibition will reward their interest, including Cook’s journals in his own handwriting.

“So that is quite something that Cook aficionados will enjoy seeing. We have one from the Endeavour voyage of 1768 to 1771 which is in the National Library’s collection, we have borrowed from the British Library in London the voyage journal for the second and third Pacific voyages,” Dr Helman says.

The Director-General of the National Library of Australia, Dr Marie-Louise Ayres says the exhibition is a once-in-a-lifetime chance to learn more about Cook’s voyages as well as the remarkable people of the Pacific, including Australia. 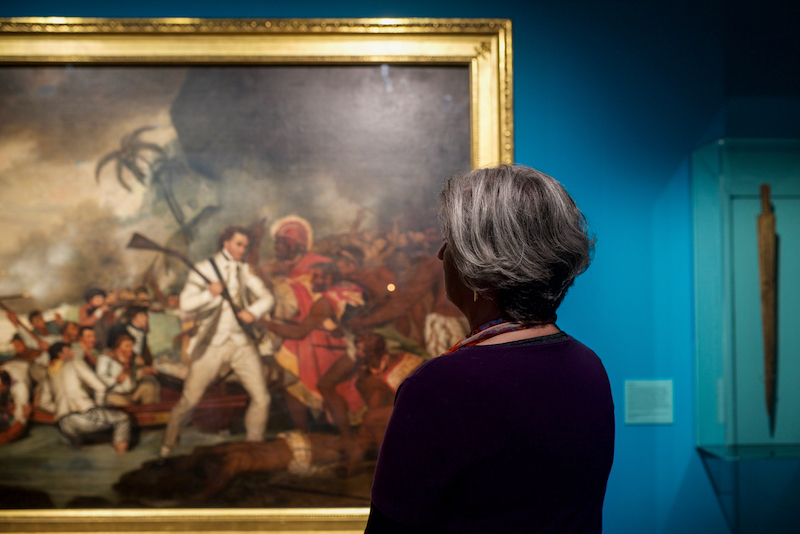 Outstanding works of art are included in the Cook and the Pacific Exhibition.

From there, an enriching experience was to look at records and talk to the First Nation Peoples’ communities and discover what those records meant to them as well. On touchscreens, people can read their perspectives for themselves.

“One thing we really wanted to do was work with the communities to look at the exhibition, look at the records of Cook’s voyages, of meetings of people, that is the way to do it, to talk to people about their perspectives. Consultation is a huge part of that,” she says.

For a man who would go on to such iconic status, James Cook came from humble beginnings. He was born in Yorkshire in 1728, the son of a farm labourer. He was bright and intelligent and was apprenticed to a shipowner – sailing coal ships in the North Sea, English Channel, Irish Sea and Baltic Sea – before joining the Royal Navy in 1755 where he quickly rose through the ranks.

“His journals are amazing because they are the closest we have to how he experienced the voyages,” Dr Helman says. “One of the issues was his journals, particular for his first voyage, the Endeavour voyage, was heavily edited. He didn’t have a lot of control over what appeared in print. With the second voyage, he had much more control with the official account which was produced from his voyages. But from the third obviously, he did not have any control over what was produced because he was no longer around.”

“Cook has become a symbol in world history, I think many people are more familiar with Cook’s name than with many other people in Australian history,” Dr Helman says. “Cook is a complex figure and means different things to different people, so it is timely we have another look at Cook.”

The NLA records that one of the biggest challenges facing eighteenth-century scientists was the size of the solar system. Scientists believed the planet Venus was the answer to determining how far the planets were from the sun.

Transits of Venus come in pairs, eight years apart, every 120 years. There was a Venus transit across the sun in 1761 but poor weather meant it wasn’t documented properly. So there was one last chance to document the next transit of Venus in 1769 before the next opportunity in 1874.

Britain’s leading scientific organisation, the Royal Society, joined forces with the Royal Navy to commission an expedition to observe the Transit of Venus in Tahiti. Cook was chosen to lead the voyage.

His other mission, to look for the great southern land, was kept low-key, although Dr Helman says it was an open secret.

“I think it was an open secret, Cook probably knew. The idea of a southern continent was an idea that perplexed people for centuries,” the curator says.

“The fact is both Cook’s first and second voyage had secret instructions. It was on the second voyage Cook felt that he could say he had dispelled the myth of the great southern land, he had proved there was no southern continent, and he knew Australia as New Holland from Dutch maps of the 17th century,” Dr Helman says.

“There was an idea the little bit of New Zealand that had been mapped by Tasman may be part of the great southern continent but Cook was able to map New Zealand on the first voyage and on the second voyage he came back spending time going over the Antarctic Circle on these forays to the south, and felt he proved there was no great southern continent.’’

Dr Helman says Cook was a talented navigator. He knew his craft at sailing, and was an excellent mapper. “People who captained ships didn’t need to be great at mapping. He also had an inquiring mind, he is one of the great navigators in world history,” she says.

According to the NLA’s website, when the British reached the Pacific, they found knowledge systems to rival their own. Pacific navigators observed the stars, ocean currents and wave effects, air and sea interference patterns caused by islands and atolls, the flight of birds, the winds and the weather.

European navigation required charts and instruments to address the critical problem of position at sea. Aboard ship, officers and crew with specialist skills, checked and re-checked observations.

Yet, as Cook saw first-hand, navigating the Pacific could be managed using knowledge passed on by oral tradition, without the aid of instruments.