Lake Brewster near Lake Cargelligo is a popular pelican nesting site, but this year the conditions have been perfect for a boom breeding season. Photo: Mal Carnegie, Lake Cowal Foundation.

Your sightings of the formations – called pods, scoops or squadrons – or even lone pelicans at the water’s edge could help scientific investigations into these fascinating fowls.

Record numbers of pelican nests have been counted at Lake Brewster, near Lake Cargelligo and Kieeta Lake in the Murrumbidgee Valley.

Pelican nesting has been recorded at Lake Brewster since 1984 but has only been recorded in Kieeta Lake once before, after the 2016 floods. 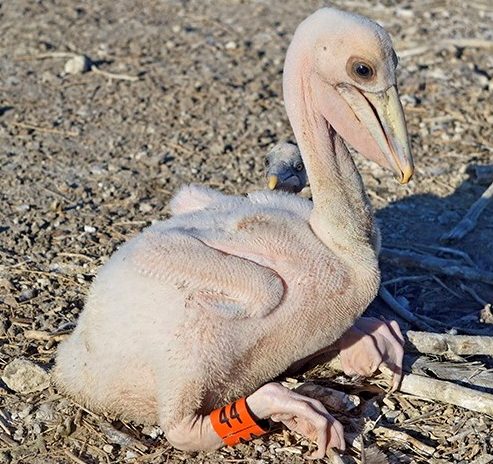 As the pelicans start their migration, people have been asked to look out for those with orange bands to help track their movements. Photo: Mal Carnegie, Lake Cowal Foundation.

The mega breeding event coincided with a wet year, dozens of full lakes and abundant fish stocks that created excellent conditions for the breeding season throughout NSW and Victoria.

Lake Cowal Foundation’s Mal Carnegie has been regularly checking on the populations at Lake Brewster in recent months and said the sight of the birds incoming with food for their chicks was astonishing.

He said each chick would consume around 500 g to 1 kg of food daily, which could quickly exhaust supplies at Lake Brewster, sending the birds further afield to find food.

“The birds fly out early in the morning and will fly up to three hours in one direction to source food – whether that be native fish, European Carp, freshwater shrimp or yabbies.

“You can see them all coming in from one direction and the sky is just flooded with them coming in and then the noise of that as well … it’s extraordinary.”

Prevailing wet conditions throughout the nation meant local flocks would start migrating north and east in search of warmer weather and more food.

Mal said a critical factor of pelican ecology that was poorly understood was to where pelicans dispersed and whether they returned to the site where they’d hatched.

If pelicans exhibited this behaviour, known as natal site fidelity, it had implications for wetland and water management.

“These breeding events are incredibly important to help understand and build up waterbird populations impacted by recent droughts,” Mal said.

Pelicans at both sites have been part of a leg-banding research project by the NSW Department of Planning and Environment (DPE) and University of NSW (UNSW), tracking how far the birds have travelled and if they returned to breed at the site.

UNSW Centre for Ecosystem Science’s Dr Kate Brandis said the chicks were likely to travel in all directions and disperse to a range of other sites, including the east coast.

Mal said he’d received reports of pelican sightings as close as Grenfell and as far north as Noosa in QLD.

To report a banded pelican sighting email peli.bands@environment.nsw.gov.au including (where possible) the number on the band, location of your sighting, context (if the bird was alone or with a group), the bird’s behaviour (eg feeding, flying) and the bird’s condition (healthy, unwell or deceased). Citizens should also report any orange leg bands found without a bird.