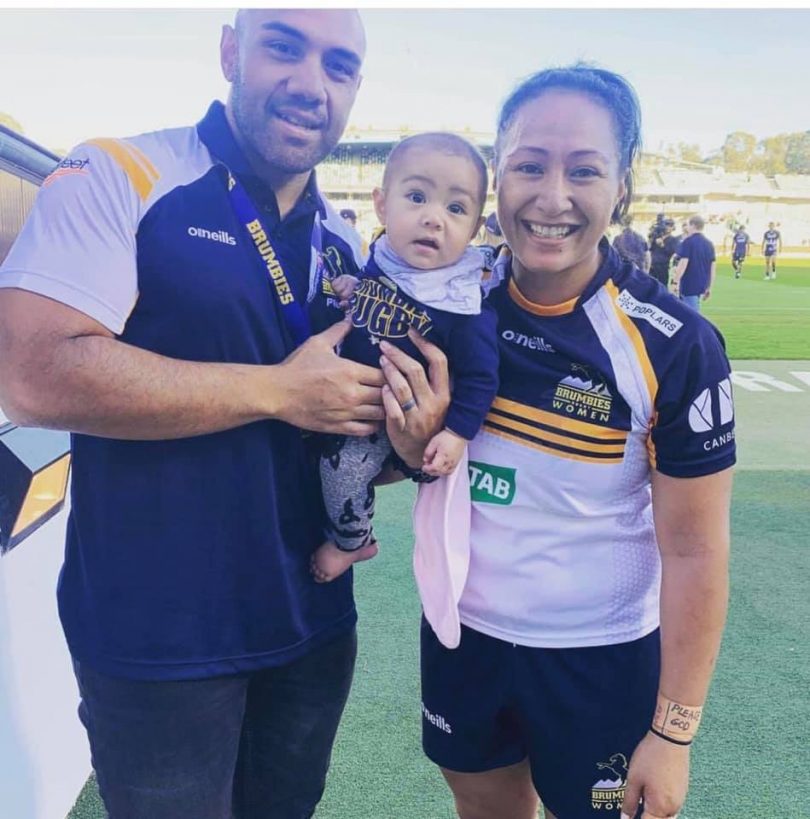 If you head to the Brumbies Super W training, you’ll see a man standing on the sideline, shouting orders with a baby strapped to his chest. His name is Tevita Siulangapo and he is the Brumbies assistant coach, baby holder and husband to Brumbies star Irene MacArthur.

Canberra’s rugby super couple are a busy pair, spending five nights a week at Brumbies and Easts training, where the couple is coaching the club’s first women side in 13 years, all the while raising their five-month-old daughter.

Coaching 30 women, one of whom is your wife, while looking after a baby can come with its own series of challenges, but nothing phases Siulangapo.

“Coaching with a baby can be quite difficult. I can be trying to be serious but all the girls are looking at the baby strapped to my chest instead of what I’m trying to teach them,” Siulangapo said with a laugh.

“Part of the reason why I have the baby strapped to my chest is that I want to make a statement that it is possible for a husband and a wife to be involved in the same team and raise a child at the same time.”

“We want to express to girls that it is okay to bring your kids and this is a safe environment for us, not only to grow the next generation but also to grow as rugby players,” MacArthur agreed.

Rugby has always been a family affair for the passionate duo and they are determined to create a positive change in the game by bringing their experience to local women.

MacArthur, who grew up in the small New Zealand city of Hamilton, spent most of her childhood around rugby games and training and hopes to bless her daughter with the same upbringing.

“She can be a little distracting but we love her being around rugby so young,” MacArthur said. “For me, going back to footy was for my sanity and for my me time. My intention was just to train with the Brumbies but when I got selected, I didn’t want to take the opportunity for granted.

“Most mothers have to go back to work but I have a really supportive husband and family network who allow me to play for a little bit longer.”

MacArthur is set to play her first competitive rugby match since giving birth to little Sasha-Elly, and there is no stronger test than against the Waratahs in the Super W season opener on Saturday afternoon (23 February).

“Our passion at the moment is to share as much experience as I have. I want to give back to girls who are really inspired to play rugby,” she said. “I find coaching gives you way more reward than as a player. Players have individual goals and team goals but with coaching, it is all about the team and the family.”