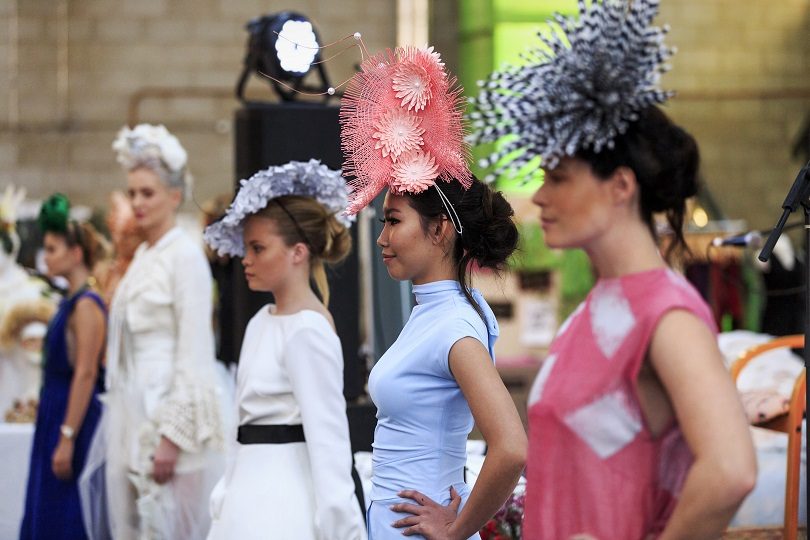 As a significant activity for Design Canberra Festival 2017, Pure Pod clothing label earlier this month hosted an inaugural ethical fashion event; Fashionably Numb. The ACT Greens Minister, ethical designers, makers, bloggers, influencers and people from all over the country were in Canberra for this first-of-its-kind event held at Dairy Road Precinct on the 11th. Kelli Donovan, founder and designer for Pure Pod shares her inspiration and intention for creating this revolutionary event and a guide to how you can build a wardrobe that supports local and small businesses, ethical makers and the environment. 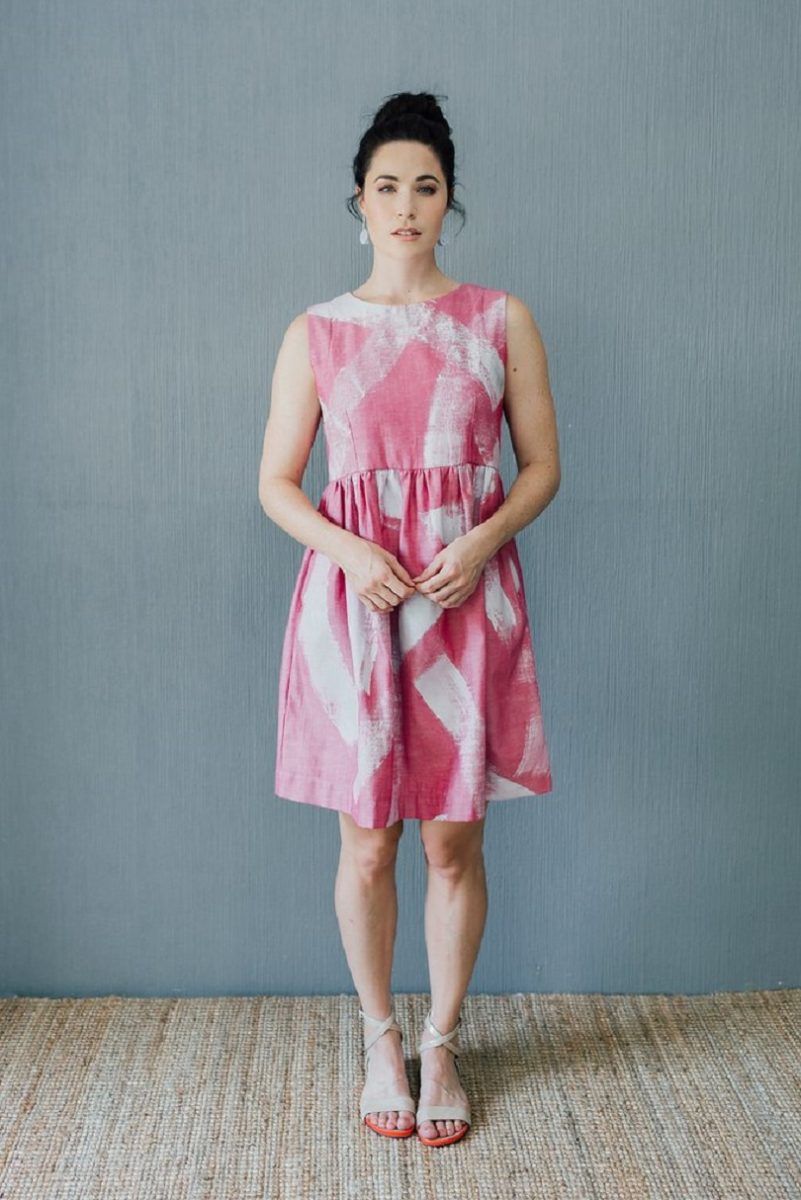 Launched in 2007, Pure Pod is a pioneering ethical fashion label with beautiful collections made with fair-trade certification. Most of their collections are made with organic, natural and premium sustainable textiles. 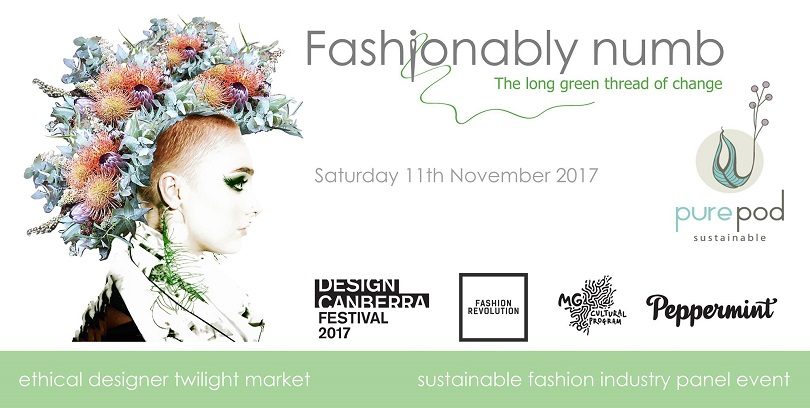 In describing her motivation for organising this event, Kelli said, “Fashionably Numb is extremely important to show people what is really happening in the fashion industry to local designers, craftspeople, industry people, local jobs, global changes to industry, social aspects of the manufacturing of fast fashion and the pollution it causes. Most people… are really not aware of the huge problems fast fashion is causing. I wanted to show people we are all part of this problem and (get them to) re-think their purchases…. Fashion is seen as a glossy, glamorous industry but there is a very different side to it behind the scenes”. 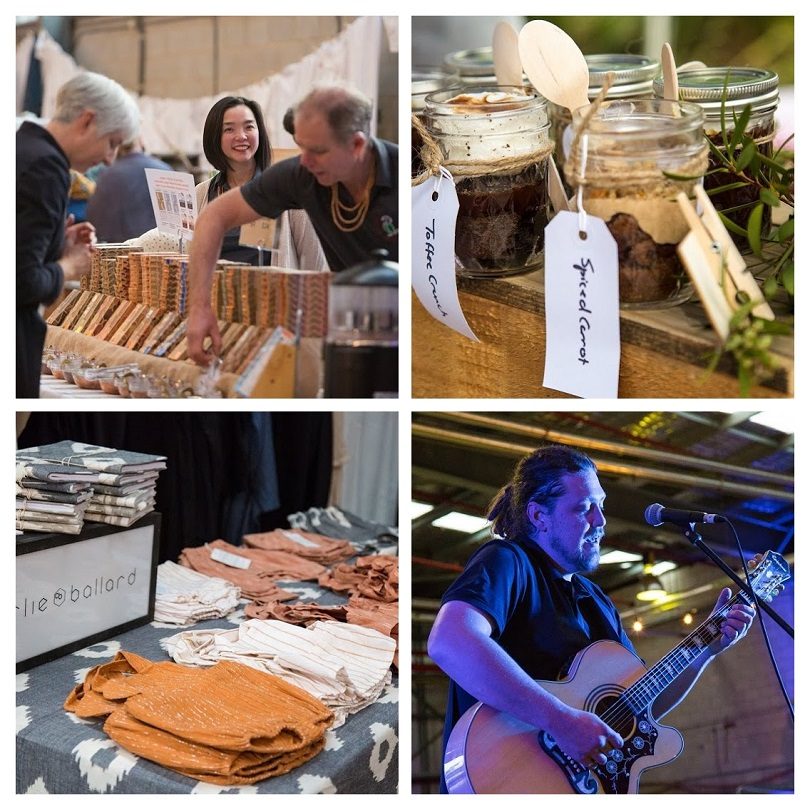 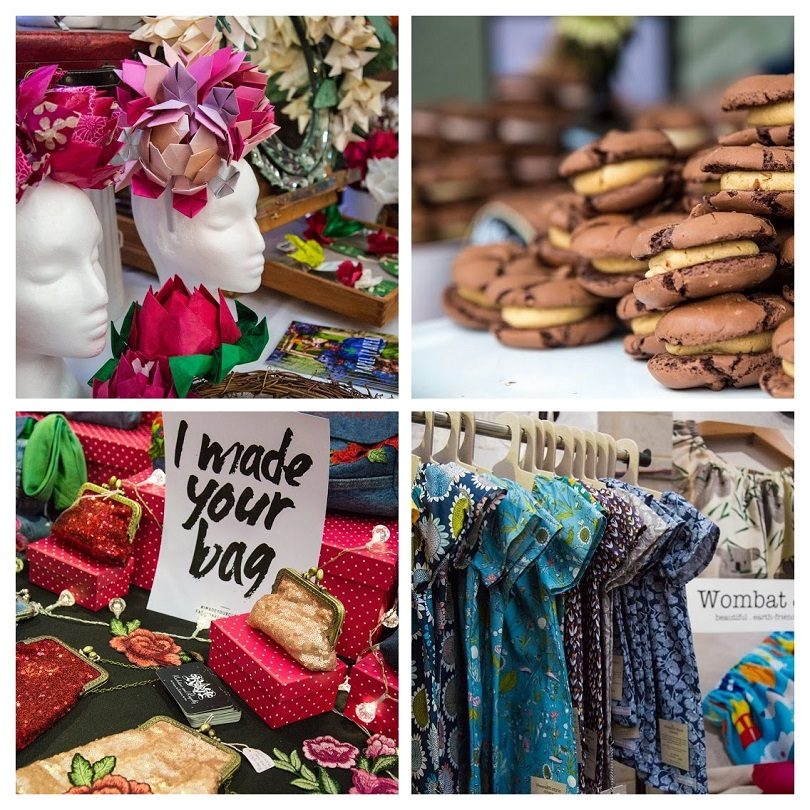 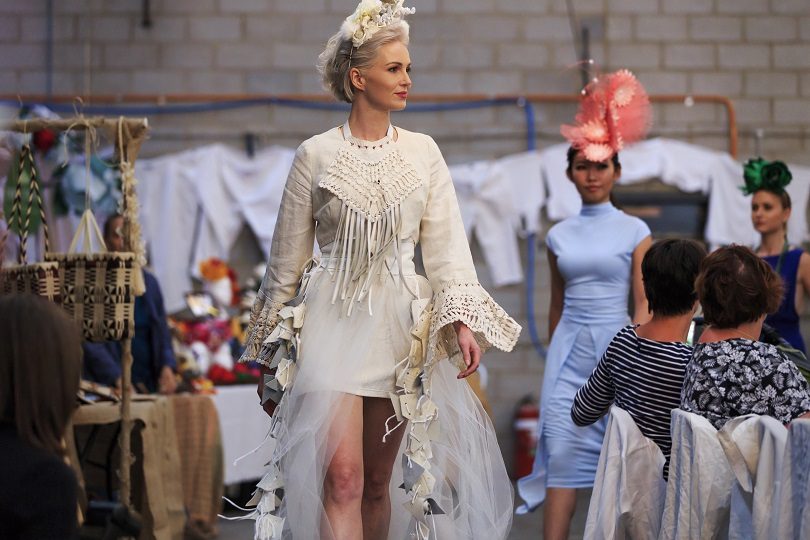 I had the pleasure of styling most of the models for the catwalk show that kicked off the evening’s industry panel discussion. Models wore Pure Pod, Indecisive, Gabrielle Spencer Bridal and Rocks & Royalty. Models’ hair was done by Dilkara Essence of Australia, with makeup by Chloe Alexandra. 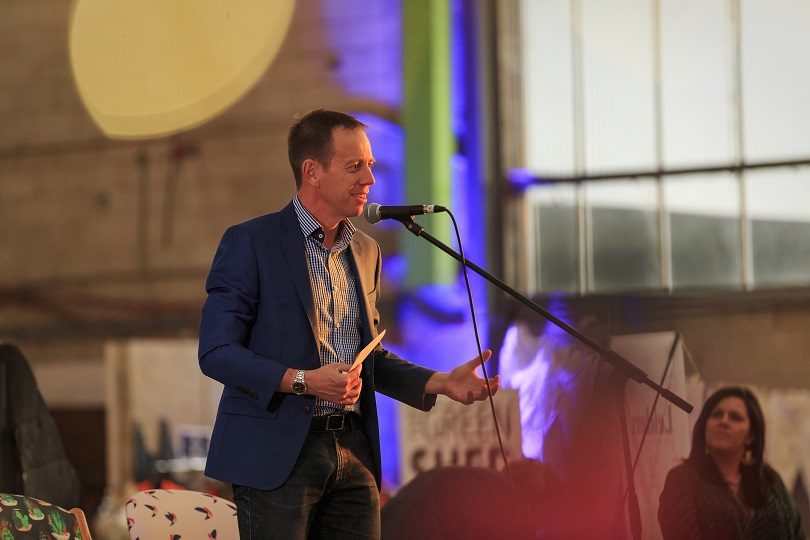 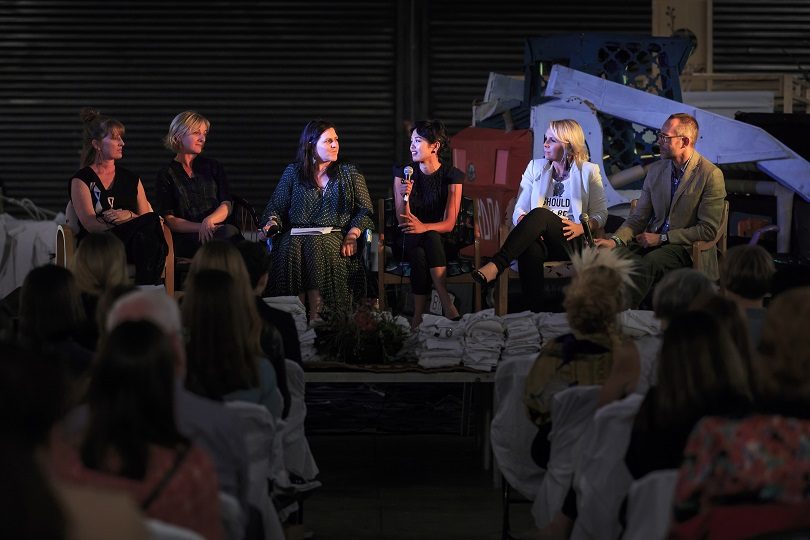 Guests heard the latest in sustainable and ethical practices in fashion design from industry experts including the Country Coordinator of Fashion Revolution ANZ, Melinda Tually, who also moderated the discussion. Fashion Revolution is a global movement that began as a result of the Rana Plaza factory collapse in 2013, where 1,137 garment workers were killed. Other panellists were Kelli Donovan, Rachel Pines, founder of Moonbird, Jennifer Nini founder of Eco Warrior Princess, Faye De Lanty, Eco Stylist for Salvos Stores and Brian Tunks, founder of Bison Home. 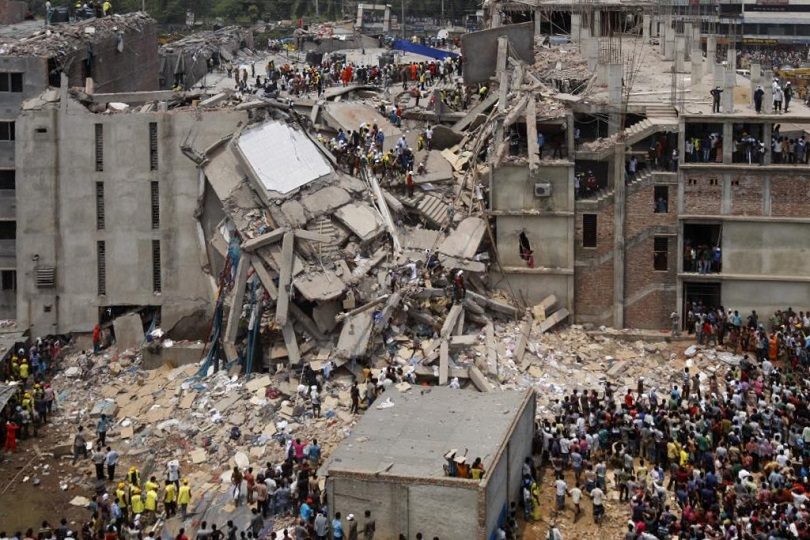 The Rana Plaza incident was a catalyst for sustainable and ethical fashion being catapulted into mainstream fashion conversations. Labels, organisations, not-for-profits, and individuals advocate for changes to be made in the way things are done in fashion manufacturing and recycling. 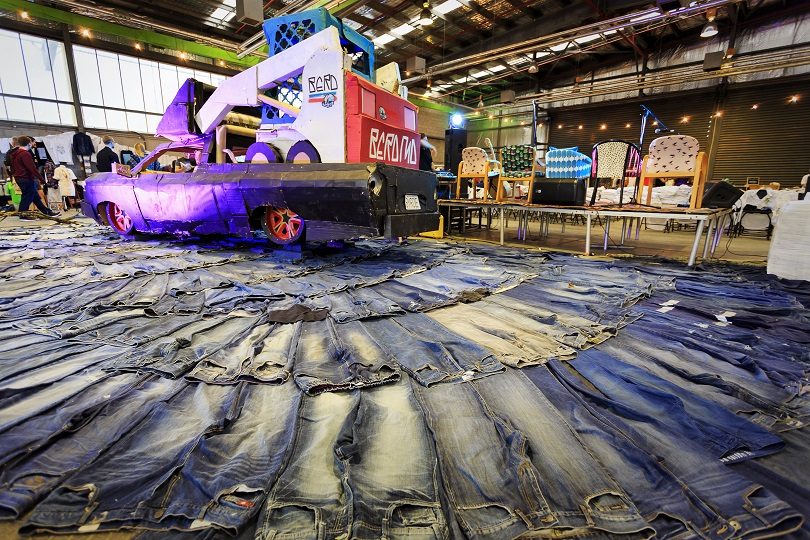 Gracing the centre of the warehouse was a massive art installation which made a lot of people gasp in horror at the extreme amount of clothing in the exhibition. Local artist, Dan Maginnity (Byrd) produced the amazing cardboard recycled vehicle installation which covered many pairs of denim jeans. They were collected in only 10 days from one Salvos Store branch in Canberra. Local artist Dr Hanna Hoyne created the denim installation which showed the enormous amount of waste that exists with denim. Kelli says denim garments are one of the highest polluting products because of the way the cotton is grown, made, sprayed, dyed, etc. It is one of the hardest wearing textiles, but it is no longer cherished the way it should be or worn until it falls apart like it once was. Fast fashion has reduced the cost of jeans and denim garments to a point where they are now disposable, ’throw away’ products. 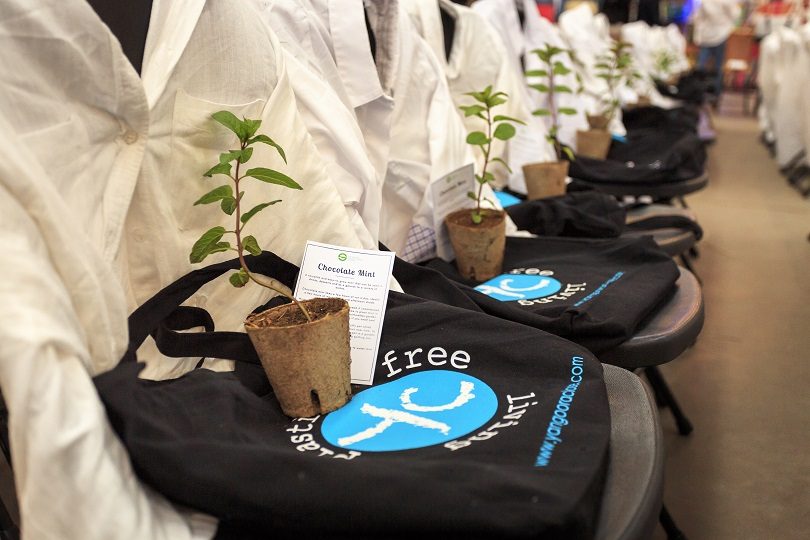 Kelli had an installation of 1,500 white garments all around the warehouse and on the seat of each guest to represent a person who passed away in the Rana Plaza factory collapse and the rest of the garments represented others who have perished in factory fires. The white pieces were from Salvos Stores in Canberra. Kelli went on to say this figure is just a drop in the ocean compared to the number of people who have been injured or died in factories over the last century. These do not include all those who have died or been injured from pesticides and chemicals from factories, manufacturing, farming and water pollution from the fashion industry. 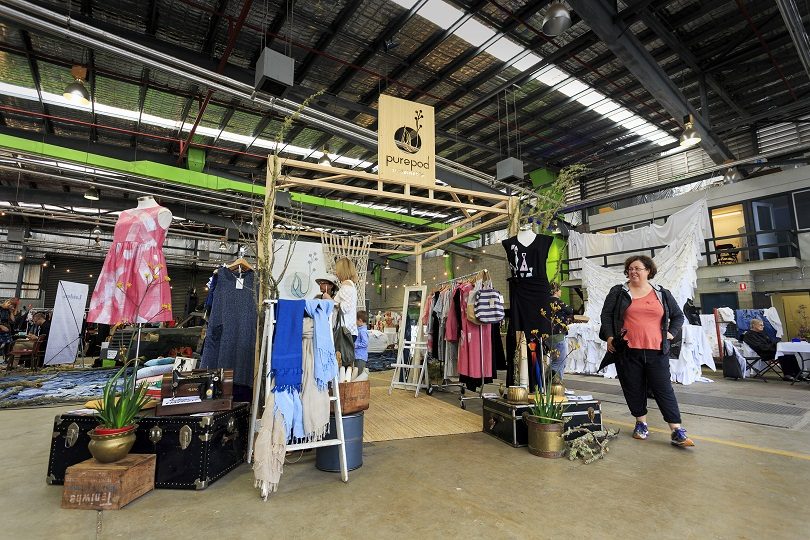 Kelli concluded with a quote that I strongly agree with and live by; “Ethical and sustainable industry is far more exciting to me than mainstream, as there are innovative thinkers, people who aren’t scared to stand out and make changes and who are really moving a revolution of change and disruption to a very old industry. By producing and organising ‘Fashionably Numb’ during Design Canberra, I wanted to create a huge ‘in your face’ statement about the oversupply of fast cheap fashion, what it is doing to the people working in it and what it is doing to our planet. With an amazing bunch of likeminded people, we did produce an amazing event at the Dairy Road Precinct.”

If you missed Fashionably Numb, many of the designers will be selling and showing at Cardif Collective Christmas Pop up from the 1st– 22nd of December.

Next year Kelli is hoping to work her way into the education side of this industry by getting schools involved in doing more ethical designer workshops. As ACT Coordinator for Fashion Revolution, Kelli will also participate in another activity for global Fashion Revolution week next year (April 23rd – 29th 2018). This is the time where the world fashion industry unites for a week of talks, change and memorials for the Rana Plaza victims.

If you want to know what you can do to also be part of the solution and cultivate a more sustainable wardrobe, read Building a Conscious Wardrobe and other fun things written by Leiden Magazine for Fashionably Numb.

Do you ever think about who made your clothes and where they come from? Are you inspired to build a more sustainable wardrobe? What steps have you taken or will you take in the future towards a more ethical wardrobe? Let’s get a conversation started in the comments below.

What an amazing event and what an eye opener. I wish I could have been there! The models look so glamorous and it’s exciting to be witnessing this great revolution in the fashion industry. Although I have often relied on pre-loved clothing (charity shop culture is big in the UK) your articles are making me look at second hand shopping with completely new eyes. I’ll make a point of hunting for gems I wouldn’t find in mainstream shops and see how I get on. Something that also works is putting clothes away and not wearing them for a few years; it’s
amazing how much more you appreciate a garment you’d forgotten you had! ?

I appreciate the collaborative effort of the community taking responsibility for OUR environment. Well done! This article gave me a detailed description of what was on offer.

I’m so proud of Canberra leading the way!! If everyone starts making better choices about their purchases the world can truly change. Providing fashion innovation is the way to make simple changes available to the everyday person.
Awesome article 🙂