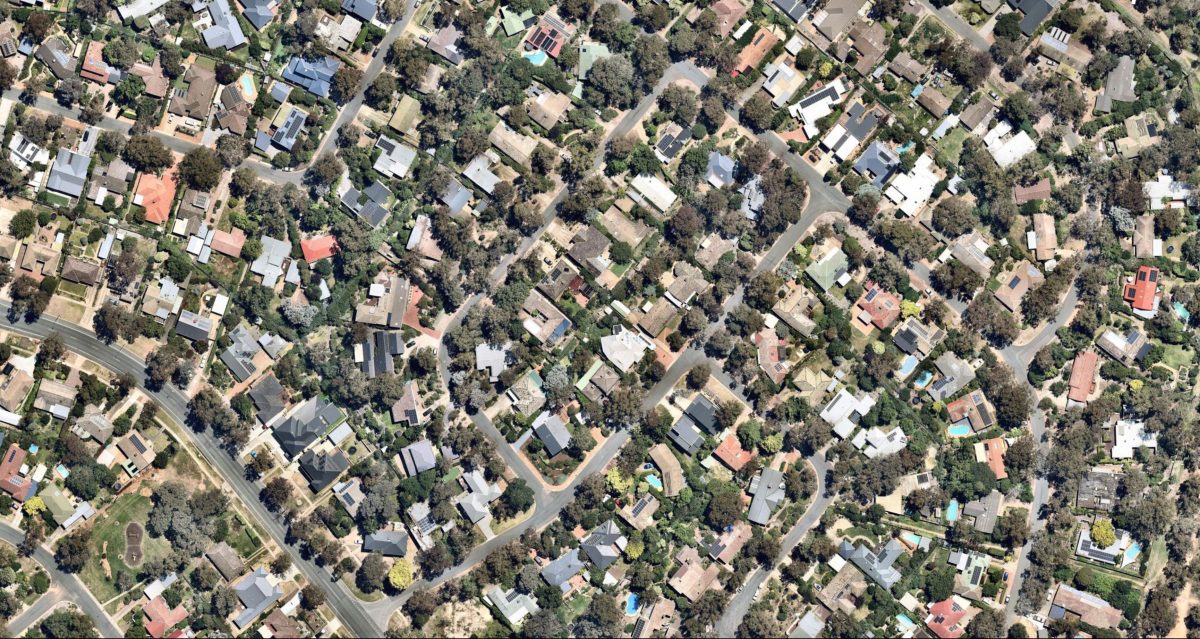 Leafy Aranda has the highest tree coverage in the ACT. Photo: Nearmap.

The ACT Government has moved to allay fears that it has compromised the viability of the tree canopy targets and site coverage ratios laid out in Canberra’s Living Infrastructure Plan.

It came as new data showed that while all residential suburbs in Canberra have gained tree cover since the introduction of the Urban Forest Strategy last year, stark differences in tree coverage remained between old and new areas. 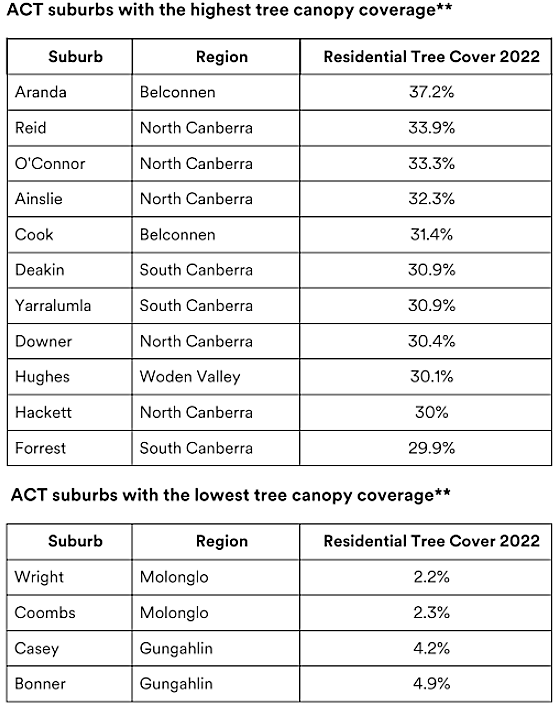 But Mr Gentleman said V369 was an interim step to ground the Living Infrastructure goals and promised that the new rules would eventually apply to all residential and commercial areas in Canberra when the new Territory Plan comes into force in early to mid-2023.

“Variation 369, as it was originally proposed in early 2020, would have prevented some of those buyers from building the home they had recently purchased as part of a house and land package,” Mr Gentleman said. 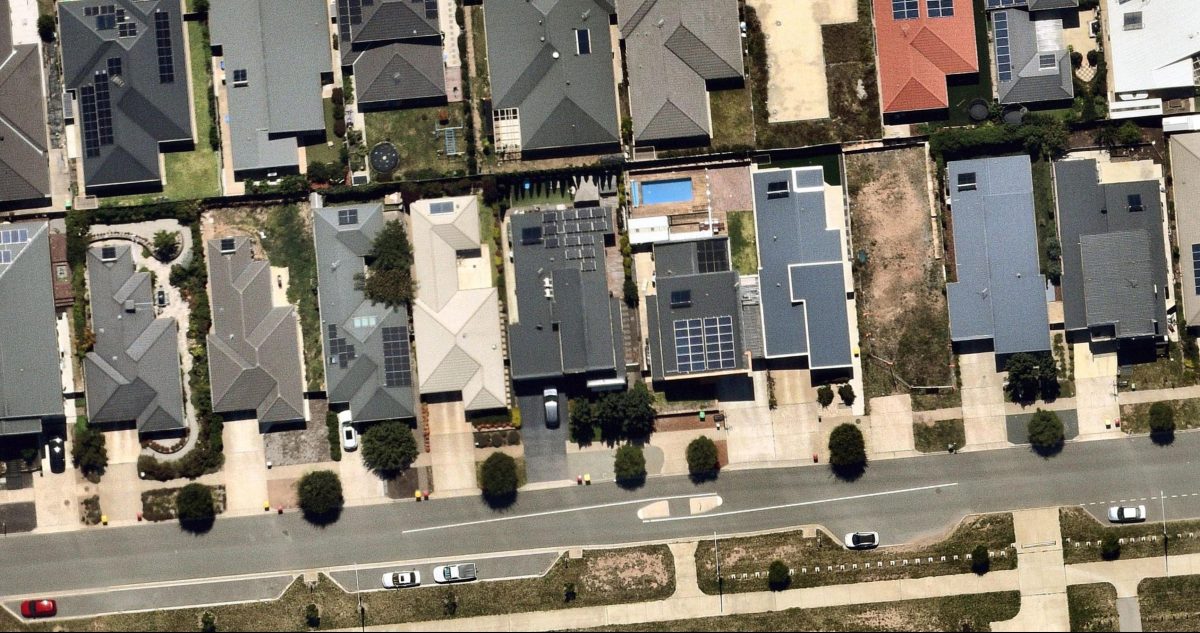 The new suburb of Coombs has one of the lowest tree coverage levels in the ACT. Photo: Nearmap.

He said blocks in established suburbs would be required to comply with V369 when it came into effect on 1 September 2022, including in situations where blocks were consolidated or subdivided.

“The new Territory Plan we’re working on, which will be open to the community for feedback in the coming months, will look to increase living infrastructure requirements above and beyond those set out in Variation 369, including in commercial zones and in estate development plans.

“The changes introduced by Variation 369 are an interim measure to enable builders, architects, designers and others the opportunity to change their house designs to enable more trees and green spaces in Canberra backyards.

“The timeframe distinction for blocks approved under an estate development plan on or after 1 January 2020 set out in the recent Ministerial Direction will be removed when the new Territory Plan comes into effect in 2023.

“Living infrastructure provisions will then apply to all residential zoned blocks, regardless of when the block was approved.” 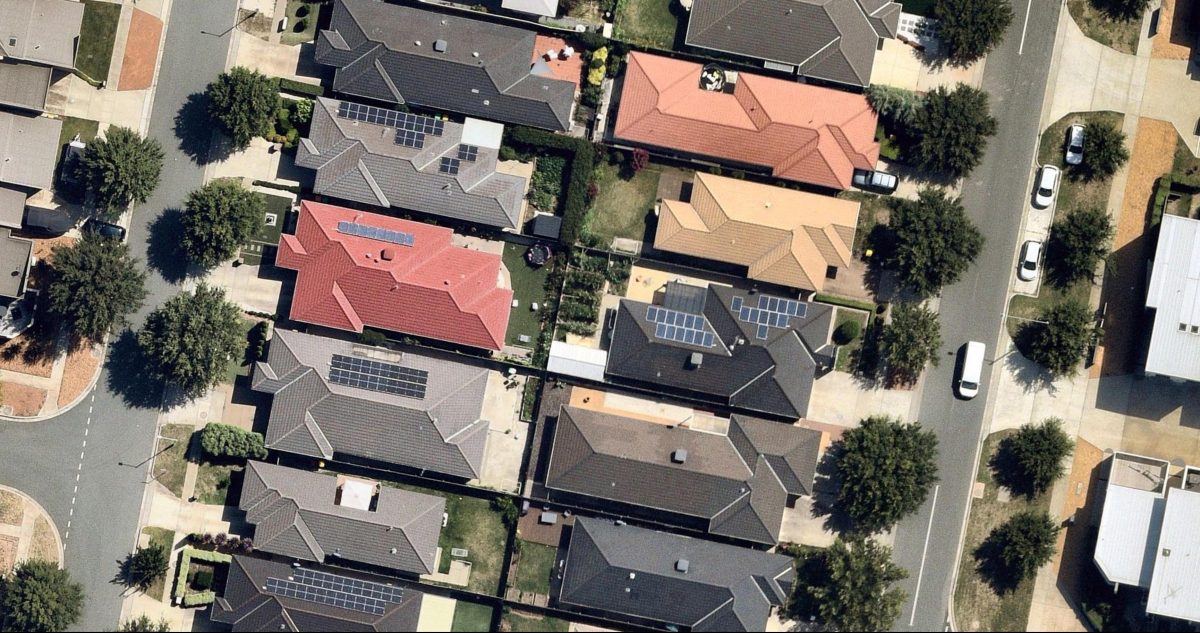 The analysis found the median suburb achieved a relative increase of 5.4 per cent in residential tree canopy coverage, with Aranda ranked as Canberra’s leafiest residential suburb.

Overall, the median suburb has 24 per cent residential tree canopy coverage and 10 suburbs have already achieved the ACT target of 30 per cent.

Way more trees in Coombs now, compared to before it was developed.

Coombs was almost entirely pine forest before it was developed. We used to go there to collect pine cones as kids.

The issue with the Facebook post highlighting the ACT government report that says Isaacs is the leafiest suburb in Canberra. That’s false data analysis as the Isaacs suburb boundary (unlike most other Canberra suburbs) doesn’t follow the Urban footprint, but the suburb boundary instead extends to the top of the ridge line that includes the densely wooded Isaacs Ridge Pine Forest. Thus giving a false impression of the level of the Urban Tree Canopy for the suburb.

The ACT government has become a master at twisting or cherry picking data to suit their narrative.

Especially in the areas of public transport, public education, land and housing.

Radiata pine trees don’t have leaves, they have needles. Doubt if the ACT government knows the difference.

Put a m2 limit on how much fake grass can be installed on a property. Its plastic, noxious to produce, destroys soil health and its heat output is way more than natural grass or mulch, and ends up in landfill. There are much more climate friendly options.

I doubt the Nearmap report. I would recommend this Urban Tree Canopy Coverage report from ACT Gov: https://www.google.com/url?sa=t&source=web&rct=j&url=https://www.cityservices.act.gov.au/__data/assets/pdf_file/0009/1887696/Urban-Tree-Canopy-Coverage-Report.pdf&ved=2ahUKEwjrp8X_m4v4AhWn8XMBHSGABy8QFnoECAwQAQ&usg=AOvVaw0sbTPflHayKvMyVn377-aK. Woden Valley is the leafiest district. Isaacs is the best covered suburb.

*Having double checked my facts with someone who is working on the Urban Forrest project.

They suggested the journalist ask Rachel for ALL comparative data 2021/2022 by suburb (not just a snapshot of the ACT’s wealthiest and greenest suburbs in 2022 as reported here). There have most definitely been declines in some of the median/ “typical” suburbs, which internally has set off some alarm bells, yet despite this they are reporting a positive overall story here?!

Also request the time of year which these comparisons were made, and even the time of day that the comparison images were captured. This LiDAR imaging has been proven to be highly subjective in the past, analysis of data back in 2015 indicated a +/- 3% variance in their modelling for all of the ACT.

Also in the most recent report, which they possibly won’t share (wonders why?), there are cautionary notes on over-calculating the canopy values due to Canberra experiencing two incredibly wet seasons leaving everything lush and green.

12 months of data is simply inadequate to determine any reliable trend.

In some older suburbs I have heard that the ‘calculated’ green areas have declined yoy.

In the outer suburbs of course there will be an increase, you are starting from a zero base; however the knockdowns in older suburbs where the site is cleared and two/three concrete mini palaces are built – is definitely eating into the amount of tree cover in these suburbs.

This is a good start but to claim with only 12 months data that we are all ok? is Barr data manipulation at its finest.

Bigger houses have more energy use. Imagine those lego bricks in summer no breeze and running the AC on full all day with no trees.

Using a percentage of land for canopy means that the requirement for trees is borne by those with larger blocks but smaller homes. Surely there should be a small lot tax where they have to support trees located off their property. Why should the larger space but smaller more efficient homes be made to pay a higher rate.

Which suburb used the most coal power?

Another example of Crime against Nature

That’s hard to believe ! In our suburb , knock down rebuild include complete stripping of all vegetation. The the new McMansions are built right up to the borders , no room left do trees, well maybe some room left for mondo grass and the odd shrub.

The new suburbs released since this labor greens gov have been in power, since 2001 are the worst. This lot want us all in a concrete jungle in apartments while they live in houses.

Too many trees, they mostly block views, threaten roofs and other structures, and block otherwise beautiful views. Give me sunlight and views any day before trees!

someone needs to think of the pools

That would have much more to do with rainfall over the last year than with the Urban Forest Strategy, the early stages of which are largely about the review of the Tree Protection Act.

News earlier this year that the Act will be extended to cover all trees over 8m. tall, and the resultant proliferation of chainsaw activity in the suburbs, will likely see canopy cover stall or shrink – which will, of course (with the Alice in Wonderland system of logic which is so often apparent in ACT government policy making) be pointed to as justification for more stringent tree protection rules being applied to many more trees.

No trees we all die.

Given Canberra’s history with fires, I think there should be guidelines / rules around the types of trees and shrubs being planted in and around suburbia. Planting natives such as eucalypts is ridiculous as they are the most flammable trees known and renowned for spreading fires. Tree selection around suburbia should be based on a fire-retardant factor so any fires will be slowed down or cooled. Very few natives are fire retardant. Something like an oak is not just fire retardant but also deciduous and works better in suburbia. Lets in sun during the winter and provides shade in summer.

Nothing makes a suburb feel better than having established trees, these new build areas look so depressing.

Gay McGuire at least those suburbs were all allocated 1/4 to 1/2 acre blocks of land.

Why not build appropriate and affordable housing < - sorry for swearing again

Why not build terrace houses rather than freestanding house that occupies nearly the whole block anyway? It would leave more room available for trees.

Yes! Towering shoeboxes or tacky and overbearing McMansions. What kind of choice is that?

Chris Baylis I like the terrace houses around a large central shared garden thing you see in Europe. Medium density and lots of room for trees.

Rob Mcgrath Shared gardens where people are allowed to have a vegetable garden. Lots of shared fruit trees too.

Charles Bootes the shade being thrown at Coombs……

People here now fear trees and get quite animated in their quests to have them got rid-of. Plus overpriced tiny blocks aren’t conducive to proper trees, but the current crop of people wouldn’t plant them anyway.

More urban wastelands. 😠 But more “donations” from the development industry.

Apart from trees, look at how many dark roofs there are in that photo. Summer heat is going to require insulation and cooling.

Yuri Shukost Yes this has been mentioned for years, and I personally have mentioned it to several local MLAs, but they NEVER bring in any change of rules. This is very low hanging fruit, as pale roofs don’t cost more than dark roofs.
The individual home owners who choose the dark roofs bare some responsibility too, as it is common knowledge that dark roofs cause higher energy use. They just don’t give a …

Doesn’t the oldest suburb of Kingston have the or one of the highest housing densities? And while it doesn’t make that top 10, i’m sure it comes pretty close 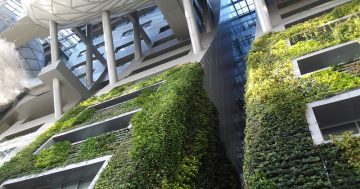