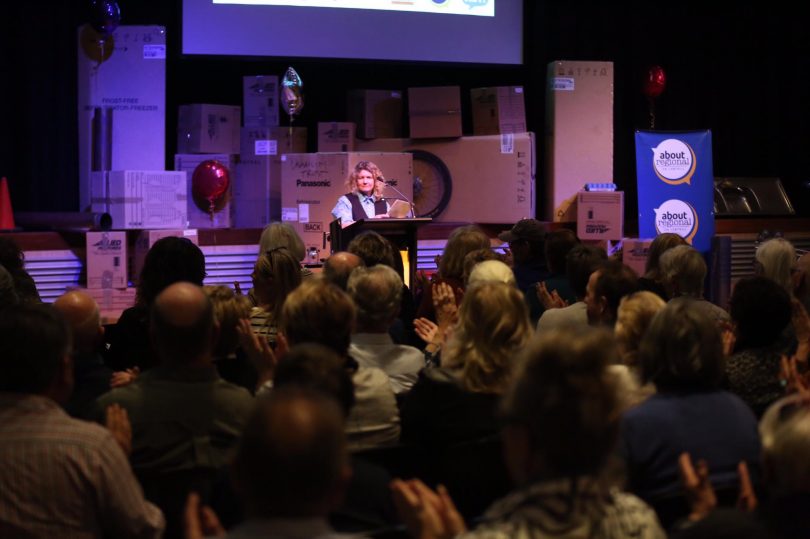 Jo Saccomani is the founder of Two Sheds Workshop and is one of the bright sparks of the Bega community who inspired 300 plus people at the recent Festival of Open Minds.

Despite growing up with parents who built, renovated and decorated the family home, it was by chance that Jo became a carpenter.

From school, she began an Arts Degree at ANU but left in third-year after hearing of a government-funded women’s building program in Sydney.

As soon as she began that carpentry program, she realised she had found her calling. Now, having been a qualified carpenter and running her own building business for over 30 years, she is passing on the skills of woodwork and carpentry at her community-based woodwork school.

Last year Jo become a Churchill Fellow and traveled to the USA to discover new and innovative ways to extend carpentry and woodwork skills to women and children.

Jo now has her sights set on challenging the status quo and the low number of women looking to building trades as a job option.

She holds regular classes and workshops in Bega but during September, October, and November is running weekend workshops for women in the ACT at the Lyons Scout Hall, Tooms Place.

You’ll build an Australian hardwood shelf unit with a drawer and learn and practice some woodwork skills that will set you up for building whatever your heart desires!

Have a girls weekend and enjoy building something with your own hands. No experience necessary!

On September 1 at the Festival of Open Minds, Jo’s speaking slot got moved around a few times, but she approached the delays with her usual good humour.

Click play on the AudioBoom player to join the discussion…

Thanks to Gerry Corcoran and the Bega Valley Commemorative Civic Centre for their audio, visual, and tech support at the festival.

*This article was first published by Ian Campbell on About Regional.

Wendy Johnson - 5 hours ago
One of my top picks for a facial is Jindii Eco Spa at Australian National Botanic Gardens. The spa is beautiful, spacious and... View
Opinion 31

t2owe - 17 hours ago
I really don't care about what they say about the Libs. Given the antics of the Barr government, just how much more damage co... View
t2owe - 17 hours ago
How about a change of government. It's way over due,. ACT government is consult in name only, and planning is off the wall.... View
News 5

JS9 - 18 hours ago
"But Mr Lawson said he would have thought a Greens party would be opposed to the infill project getting underway that would h... View
News 8

Daniel Duncan - 19 hours ago
Another reason to vote Barr and his crony's out. View
ACT Election 25

Acton - 19 hours ago
You do not dispute the fact that Barr = high rates, but appear to have some conceptual difficulty with 'nothing else matters'... View
russianafroman - 21 hours ago
Maya123, All Labor has done for us is build chic apartments for the rich. The Liberals are looking out for the blue collar bl... View
JC - 21 hours ago
People should also be asking what Coe equals. Because it isn’t overly clear. We know they stand for everything that “anno... View
Lifestyle 2

Shane Westmore - 23 hours ago
TfNSW has never had a desire to run this service for whatever reason... i would once every month or two travel between Sydney... View
Business 6

A man has died following a crash between two B-double trucks near Yass last night. About 10:15 pm, emergency services...
Breaking 0

UPDATE - 11:00 am: A 40-year-old man has died following a single-vehicle accident on Uriarra Road this morning (22 September). The...
Property 2

The Canberra Liberals have unveiled a suite of policies designed to drive down the cost of motoring in the ACT,...
Opinion 31

The first week of the election campaign proper has come and gone, and one thing is clear - no one...
ACT Election 25

@The_RiotACT @The_RiotACT
ACT Policing has confirmed that a 40-year-old man has died following a single-vehicle accident on Uriarra Road this morning. The incident occurred shortly before 7:40 am https://t.co/Dub5SeuxdZ (3 hours ago)