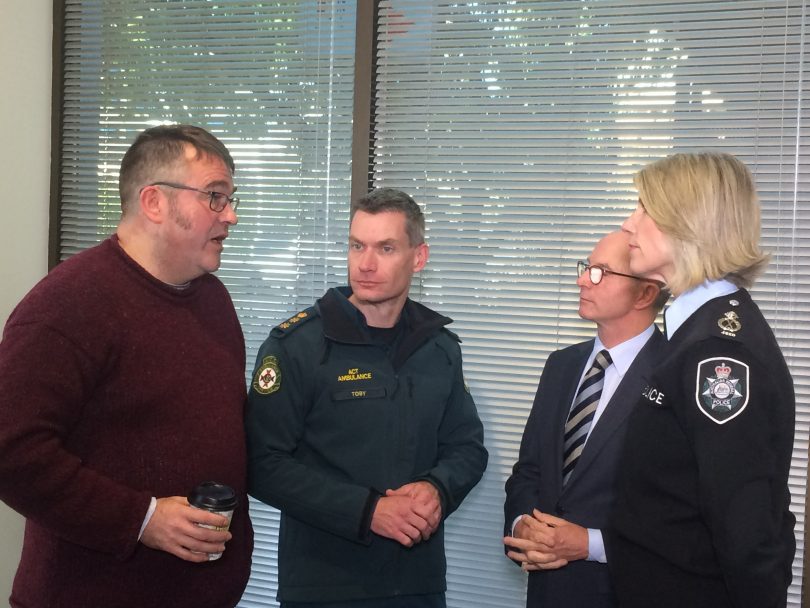 There was no doubt that the pill testing trial at the Groovin the Moo festival at the University of Canberra on Sunday had saved lives, with the identification of a two potentially lethal substances among the drugs that were presented, according to the doctor who ran the operation.

Dr David Caldicott from the Sta-Safe Consortium said one substance known as N-Ethylpentylone (ephylone) was responsible for a number of mass overdoses around the world, and was one that he as a doctor feared.

“This is a product that is targeted in pill testing globally,” he said.

It hadn’t been seen before in the ACT, and his team had contacted Chief Health Officer Dr Paul Kelly immediately when the substance was identified.

The other substance was one the machine struggled to identify, reflecting a market that is “terribly hard to keep up with”, and was an amphetamine-type, hallucinogenic substance.

“If the machine can’t identify it that’s enough to red flag it,” Dr Caldicott said.

Dr Caldicott said his team identified 85 substances and saw 128 people, way beyond his expectations for the event.

He said half of the substances contained no active ingredients and could be considered as filler. These included a Polish toothpaste, condensed milk, and paint.

Of the psycho-active ingredients found, most were MDMA (ecstasy), the purity of which was a concern because people would be more likely to overdose.

“Many of our patrons initially thought a product that contained MDMA of high purity was a success. We were able to disabuse them of that because the purer the MDMA product is, the more likely you are to overdose,’’ Dr Caldicott said.

“It was an opportunity to interact with the consumer prior to consumption and say this could hurt you even though it is just MDMA to the best of our knowledge.”

The drugs submitted for testing were in powder, tablet, or capsule form but not liquid, which Dr Caldicott said was the most problematical form.

Dr Caldicott said people who came to the testing tent were overwhelmingly grateful, particularly those whose drugs were identified as harmful.

He said the value of the trial went beyond identifying dangerous substances.

“We were able to interact with 128 people determined, perhaps even convinced, that they were going to take drugs. These are people who are almost never in contact with the law, almost never in contact with health, therefore ostensibly an invisible group of people. We can change their behaviour, that is the bulk of young drug consumers in Australia. That is the purpose of pill testing, to get them to a place to talk to somebody who knows about this,” he said.

Dr Caldicott said there would be more trials and this one had laid the foundation for them in establishing the necessary requirements, such as liability insurance, to run them.

Dr Kelly said the trial was a success and the lessons learned would be really valuable for the ACT and other jurisdictions around Australia.

“If we continue to do what we have been doing for the past 20 or 30 years in relation to drug policy we will continue to get the issues that we face at festivals and other places every weekend and day in day out in Australia of kids putting themselves in harm,” he said.

He said pill testing was one of the ways we can avoid overdoses and deaths at festivals in the future.

“We are not in the business of targeting people who abuse drugs. We’re very focused on criminality, focused on the selling and trafficking of drugs at these events,” she said.

Only one person was arrested for possession of drugs – 18 MDMA tablets. Another young person was directed to a drug diversion program.

Four men and a woman were arrested for being drunk and disorderly. The ambulance service treated people who were mostly drunk.

“This will assist to better understand how pill testing may help reduce the harms of illicit drug use at festivals and will inform next steps and future drug policy,” she said.

“As the first trial to be conducted in Australia, I know that other jurisdictions will be looking on with interest to see the results of the evaluation. We look forward to releasing the evaluation once complete,” she said.

The Canberra Liberals maintained its steadfast opposition to pill testing, accusing the Government of turning the ACT into a haven for drug traffickers.

“Drug dealers from all over Australia will now be rejoicing the decision to allow testing of their drugs so they will be easier to market and sell to young Canberrans,” shadow attorney-general Jeremy Hanson said.

I listened to an interview with the Dr who ran this, so interesting! Such a good result

I think this is great..progressive and harm minimization at its best.

So all the other pills are good for you and legal.

Boy you can say that again!

So all the other pills are good for you and legal.

Boy you can say that again!

Rob Thomas last time I checked Drugs were illegal. So it’s ok to do drugs so long as they are not real bad ones.

Positive steps in the right direction. The war on drugs has been an abysmal and costly failure.

A great result and well done to the local authorities that allowed the trial.

Regardless, the availability of pill testing means suppliers will have a harder time as they pass off toothpaste and paint as speed. So far from encouraging drug suppliers, this activity will discourage them. The ones who stay in business will be focussing in quality control.