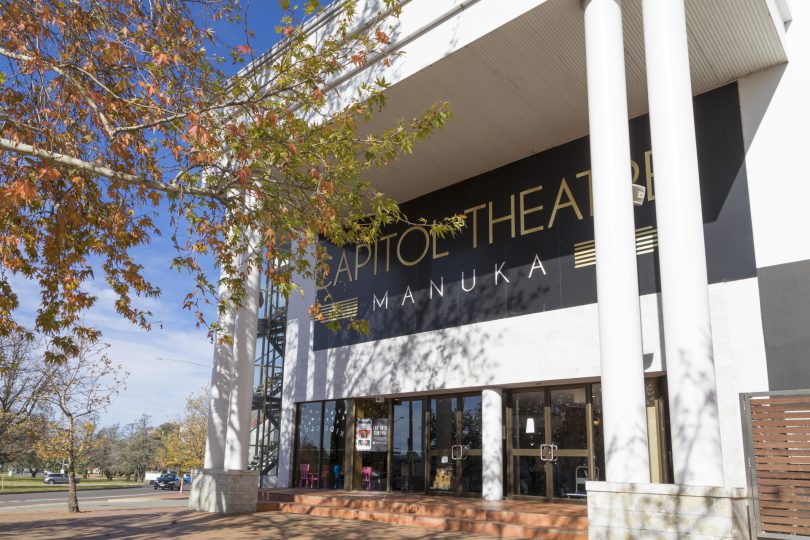 The Capitol Theatre at Manuka is closing its doors for good from 15 May 2020. Photo: Michelle Kroll.

The historic Capitol Cinemas at Manuka has been closed since the COVID-19 shutdown measures came into place, but yesterday the company formally emailed its members with the news that Capitol Cinemas Manuka would close at the end of its lease on Friday, 15 May.

“We’ve been showing movies at Capitol Cinemas Manuka for many years so the decision was not made lightly,” members were told.

The owners of the site, the Liangis family, lodged a development application in 2018 to build the Capitol Hotel which would include a new six-cinema complex and replace the existing six cinemas at Manuka. That DA was approved in October, however, building works on the $11.4 million project are yet to begin.

John Liangis said last year the new cinema complex would be incorporated into the hotel, be digitalised and have six screens albeit on a smaller scale, with seating from 80 to 120 seats in each space, much like the Palace Electric cinema at NewActon.

Mr Liangis said the current cinema was beyond its use-by date and had reached the end of its commercial viability.

However, he declined to comment further when Region Media contacted him about the cinema.

The Liangis family had also been embroiled with the ACT Conservator of Flora and Fauna over a protected tree on the site that has been stymieing the development.

An image from the development application of the proposed Capitol Hotel in Manuka.

The current Capitol Theatre building, which had a dual purpose as a theatre and a cinema, replaced the former structure of the same name that was demolished in 1980.

It was Canberra’s first purpose-built cinema, opening in 1927 with more than 1000 seats.

The original building was demolished in 1980.

Overall there will be no reduction in cinemas in the Territory. A new nine-cinema complex is being built above Kmart in Morriset Street in Queanbeyan, along with a $15 million two-storey, eight-screen complex in Gungahlin which will be operated by United Cinemas.

Both cinemas are expected to be completed in the next 18 months.

Saw Fiddler on the Roof about 50 years ago at an upstairs cinema in Queanbeyan. Can't remember just where it was.

‘The current Capitol Theatre building, which had a dual purpose as a theatre and a cinema’

Really ? I know the 1927 theatre had this dual feature originally

John – I agree. The current cinema has been very poorly maintained for some years. Also agree Manuka Plaza has not worked, probably due to poor integration with the rest of Manuka. The cinema and related buildings need to be replaced with attractive buildings that fit in with the heritage nominated shops. I’d like to see the axis (from Russell) that passes through Telopea Park, Manuka Arcade and The Lawns delineate a good arcade in the new building.

I last went there a couple of months ago to see the stage presentation of Les Miserables which was fantastic and only $10. The seats were very comfortable and they made a delicious cappuccino. I will miss the cinema there.

That's not "The historic Capitol Cinema." That one was bulldozed years ago. The present one is the replacement. This is the historic one.

I'd like to see this one rebuilt. It was a gem, and should have had a heritage listing.

Jan Skorich, I concur. However the heritage listing folks are busy these days working hard to protect the Nortbourne Slums.

Shan Weereratne Too late, they were bulldozed ages ago.

Mary Elle, you've seen a few flicks there over the years!

I saw Star Wars in that theatre...

Makes sense to start the work now while it is closed due to COVID. It is sad how run down the owners let it get. Interested to know if work has started on the approved Cinema in Queanbeyan?

Oh this makes me sad 😞

Gary Hatcliffe you might have seen it in a theatre called Capitol on the same site, but it wasn’t “there” as the original theatre was demolished in 1980 and the current building built in its place.

Not surprised really.. how terrible..

I believe it stopped being historic when the knocked down the real one, this was always a fail from the start in my opinion.

Linda Johnston - 1 minute ago
Wearing masjs, sanitising etc is about reducing risk, not totally eliminating it. The virus being air bourne may attach to yo... View
Pam Gulliver - 5 minutes ago
A SP Pillai it’s called being responsible for others as well🙄... View
Linda Johnston - 8 minutes ago
Yes, for many the symptoms are mild. But don't kid yourselves, Omicron is killing people and unvaccinated people are more lik... View
Opinion 77

Shirley Willis - 9 minutes ago
Thanks Novak for your donation to the bushfire fund a few years ago. How quickly people forget. View
Rose Mary - 1 hour ago
Agree. Except for Pat Cummins who I plan to adulate (is that a word?) fully for the foreseeable future. 😍 View
Michael L Carrigg - 2 hours ago
Never put “sportspersons” on pedestals as they keep on falling off. View
Opinion 147

Capital Retro - 46 minutes ago
I was reviewing photos of my garden taken this time last year (it was some 20 degrees hotter than what it is now) and note th... View
phydeaux - 47 minutes ago
Gum trees within the suburbs caught alight, along with the hundreds of houses? Really? Excuse my sarcasm. Any highly flammabl... View
News 26

phydeaux - 1 hour ago
Likewise. An SMSF is an enterprise. You need the interest, time, capability, and some strategic maturity.... View
Ash Miller - 2 hours ago
Looooooool View
Breaking 2

Hans Dimpel - 3 hours ago
Are there any local Canberra/Queanbeyan veggie garden pages or groups? I find most online stuff is international or national.... View
show more show less
*Results are based on activity within last 7 days

UPDATED: A man has died following a multi-vehicle crash on the Kings Highway, near Goulburn Rd, Mulloon. Monaro Police say a...
Opinion 147

Shoppers might be contending with increasingly bare shelves as increasing numbers of workers find themselves in isolation due to COVID-19,...
News 16

Wealth management firm Dixon Advisory has been forced into voluntary administration due to mounting liabilities arising from potential damages from...
News 280

The Education Directorate spent most of last year fighting the release of documents detailing investigations into teachers accused of inappropriate...
News 1

Following the recent storms which tore through large swathes of the Belconnen and Gungahlin region, many residents have voiced their...
Opinion 147

NAPLAN tests results have again provoked controversy in Canberra, and your poll results are an indicator of a deep divide...
Opinion 378

I know it’s a generalisation, but many Canberra residents appear to have an uncomfortable relationship with anything to do with...
Opinion 95

Before Christmas, I tried to be optimistic as the country, led by Prime Minister Scott Morrison and his NSW acolyte...
Opinion 139

At family dinner this past weekend, a relatively heated discussion occurred about whether or not it was appropriate to describe...
Opinion 77

@the_riotact @The_RiotACT
#Rapidantigentests will be available for free to #concession card holders from next week, but pharmacists are worried there may not be enough stock https://t.co/1YMxkDsiQL (21 minutes ago)

@the_riotact @The_RiotACT
You're #vaccinated and #boosted, you wear a mask, socially distance, wash your hands and sanitise, but as Zoya Patel discovered, you can do all the right things and still get #COVID https://t.co/LTSsyklfol (3 hours ago)

@the_riotact @The_RiotACT
There's plenty of #livemusic around the capital this week, including #bands, singers, jazz and a swansong (it's your last chance to hear Jack Phemister & The Wine Tasters). Whatever you do, though, check with venues to avoid last-minute changes https://t.co/kK4B1DuBt3 (13 hours ago)