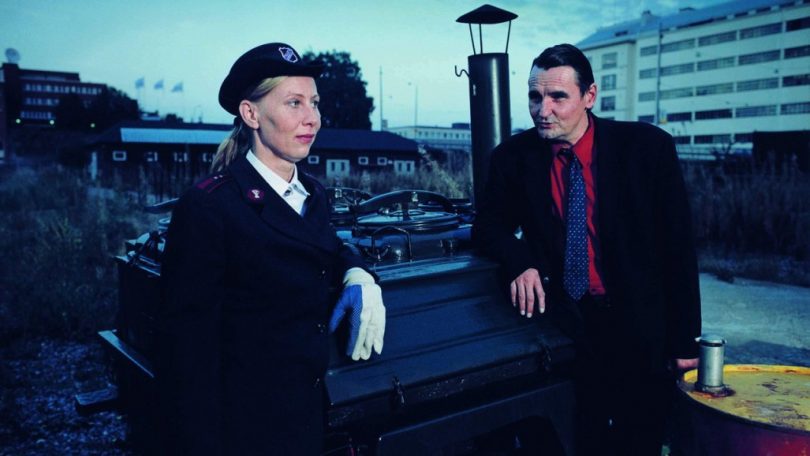 As the Scandinavian Film Festival fast approaches, the National Film and Sound Archive will whet the appetite in a special season celebrating the career of famed Finnish filmmaker Aki Kaurismäki. One of last year’s Scandinavian Film Festival standouts was The Other Side of Hope – the final Finnish fling from this workhorse auteur and the proclaimed “king of deadpan”.

His tales are populated by relatable and fallible characters, and Essential Kaurismäki will chart his inimitable body of work through ten of his films in curatorial conjunction with the equally unmistakable David Stratton.

As a truly prolific producer, writer, director, editor, and even sometimes actor, Kaurismäki’s canon reportedly accounts for one-fifth of Finland’s total feature film output. Included here are The Proletariat Trilogy (Shadows in Paradise, Ariel, The Match Factory) and The Finland Trilogy (Drifting Clouds, The Man Without A Past, Lights in the Dusk). The Finnish fare gets underway this Friday 29 June.

First up is Aki Kaurismäki’s debut feature Crime and Punishment (1983) which, as the title suggests, is an adaptation of Dostoyevsky’s novel set in modern-day Helsinki. Screening 7:00 PM, 29 June.

Part 1 of The Proletariat Trilogy, Shadows in Paradise (1986), follows two isolated, withdrawn and lonely people – a garbage collector and a supermarket cashier – in this simple yet endearingly mundane romantic drama. Screening 2:00 pm, 30 June.

Part 2 of the trilogy, Ariel (1988), tracks the various misadventures of an out-of-work mineworker as he heads south following the closure of a mine in Finland’s frozen north in this screwball comedy which won the FIPRESCI Prize at the 16th Moscow International Film Festival back in 1989. Screening 4:00 pm, 30 June.

Considered his funniest feature, Leningrad Cowboys Go America (1989) is a rollicking, musical road movie starring real-life Finnish band, Sleepy Sleepers, as the Cowboys – an eccentric band from ‘somewhere in the Tundra’. After falling out of favour back home, this ragtag group and their oddball manager elect to seek fame and fortune touring the United States of America, contending with the village idiot who wants to join their band and meeting a used car salesman played by Jim Jarmusch along the way. Screening 6:15 pm, July 2.

Part 3 of The Proletariat Trilogy, The Match Factory Girl (1990), focuses on a downtrodden woman whose attempt to enliven her terribly dull life plays out a little too literally: she falls pregnant following a one-night stand which only leads to more problems. Screening 6:15 pm, July 4.

Adapted from the same source text as the opera La Bohème, La Vie de Bohème (1992) is a bittersweet observation of the shared experiences of a tragicomic triumvirate of artists: a painter, a composer and an author, and the varying adversities they face while trying to make ends meet in Paris. French language; English subtitles. Screening 6:15 pm, July 6.

Part 1 of The Finland Trilogy, Drifting Clouds (1996), is the story of He and She. Both are hit by the recession. Both lose their jobs. In the signature style of Kaurismäki’s simple storytelling, our protagonists endure quiet struggle as they persevere to prevail. There’s also a trademark canine character. The director dedicated this to actor and frequent collaborator, Matti Pellonpää, in what would be his final screen role. Screening 8:15 pm, July 6.

Part 2 of The Finland Trilogy and Kaurismäki’s most acclaimed work, The Man Without A Past (2002), follows an unknown man who is robbed, beaten and left for dead. Unaware of his identity, and with no recollection of how he came to be in his current situation, he begins to slowly rebuild his life from the fringe of society, meeting all kinds of characters and taking in a dog named Hannibal. Winner of the Grand Prix, the Prize of the Ecumenical Jury, and Best Actress at the 2002 Cannes Film Festival. Nominated for the Academy Award for Best Foreign Language Film in 2003. Screening 3:00 pm, 7 July.

Part 3 of The Finland Trilogy, Lights in the Dusk (2006), finds an aloof Helsinki nightwatchman unwittingly falling for a woman involved in a scheme to rob the very place he has been tasked with guarding in this criminally romantic drama. Dog included. Screening 5:00 pm, July 7.

The ten-feature ‘Finnishing’ will finish up with the relevant as ever, and one of Kaurismäki’s best-known works, Le Havre (2011). A young African child arrives stowed away on a cargo ship in the port city of Le Havre, where an aging former writer now shoe-shiner caring for his wife opts to take him in. Hallmark hound also included. French language; English subtitles. Screening 6:15 pm, July 11.

According to the M.O. of the man himself, features should not run beyond 90 minutes. Therefore, the majority of Kaurismäki’s droll films run around that viewing time. Admittedly, he occasionally breaks his own rule – but only just. With the majority of the features on offer here all around 90 minutes, this a great opportunity for a not too time-consuming crash course in Finland’s favourite son.

All films are in the Finnish language with English subtitles unless otherwise stated.

The Fin has landed.

Andrea Mya Riboust - 50 minutes ago
Matt the former I assure you 😄 View
The Martini Whisperer - 3 hours ago
Lucky they’re weren’t in Texas. View
HiddenDragon - 5 hours ago
So the Big Merino will be the command HQ for Gilead Down Under - and they said it couldn't happen here......... View
Food & Wine 12

Sam McCracken - 4 hours ago
Lea Powell agree to disagree then. We clearly see this from 2 different points of view, but if you re-read your comments you... View
HiddenDragon - 6 hours ago
Based on some of the apparently well-informed comments here about ACT public housing policies, it is truly fascinating to see... View
Lea Powell - 8 hours ago
Alicia Boardman exactly! View
Opinion 12

Julia Piccoli - 13 hours ago
TBH it’s all inane noise. The music. The ads. The ‘presenters’. They don’t value add to my life. Therefore audiobooks... View
What's On 1

AndThatsAll - 14 hours ago
Just to let everyone know, The Sally Chicane EP launch is 4pm - 7pm. View
show more show less
*Results are based on activity within last 7 days