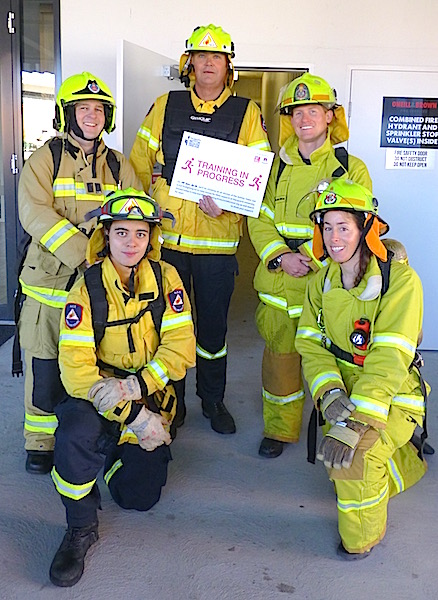 We all know the feeling we get when we climb a flight of stairs in a hurry. It kind of takes your breath away.

So, stop and take a breath as you think of what it would take to climb to the top of the Sydney Tower – a staggering 1504 stairs or 98 floors.

A group of dedicated firefighters from the ACT and Queanbeyan will do exactly that on November 9 when they climb to the top of the Sydney Tower to raise money and awareness for motor neurone disease (MND).

The group, called the ACT Capital Climbers, will also make the climb with their structural firefighting gear that weighs up to 25kg. This includes a breathing cylinder and firefighting helmet.

Leading the climbers is James Rumble from Queanbeyan Fire and Rescue, who says the extra weight is nothing compared to the weight carried by someone diagnosed with MND.

The cause is close to James’ family when his mother-in-law was taken by the disease in 2014. He knows others in the wider family of firies also affected by MND.

“It is with a great deal of pride and humility that we can be in a position to help,” James told Region Media.

“It’s also fantastic to see firies from Fire and Rescue NSW Queanbeyan, ACT Fire and Rescue and the ACT Rural Fire Service joining, in the same way we work together on the ground during a fire.

“We’re also the first team to be made up from three different fire services, which is a real achievement,” said James.

The 19 fantastic firies will join 600 firefighters from Australia, New Zealand and even Japan to climb the 1504 stairs of the Sydney Tower.

One of those is Simon Butt, an ACT Rural Fire Service member of 20 years who will be doing the climb for a fellow firefighter from Gungahlin who is living with MND.

“He was our health and welfare officer and was a fit guy who walked the Kokoda track twice to help people with PTSD.

“It’s about finding a cure for this disease and anything we can do to help is a bonus,” he said.

Dani Curcio is an ACT Fire and Rescue member of three years from the Phillip station. She is a determined first-time climber who has admired other MND fund-raising efforts such as the AFL’s Big Freeze campaign led by Neale Daniher, who was diagnosed with MND in 2013.

“A little bit of pain for us climbing stairs can make a lifetime of difference for someone with MND,” said Dani.

Somewhat of a seasoned veteran of the climb is ACT Fire and Rescue member Matt Buchtmann, who started with a similar climb in New Zealand in 2015 for the Leukaemia Foundation. He has also been behind the push to open the climb to ACT Fire Brigade members, as it was initially a NSW only event.

“It’s awesome to see it grow and I want to push it as far as it can go,” Matt said. “We’ve got ambos and SES members who are also firies involved, but you have to be a firefighter to come on board.”

He says the climb is one of the most rewarding parts of his job.

“I’m grateful to be fit enough to run the tower multiple times in full gear, so it’s really important to do what we can for those who are suffering or about to suffer from this disease.”

Nineteen-year-old Jacob Lemmey is one of the youngest climbers and joined the ACT Rural Fire Service as part of his gap year while studying international relations at university.

Jacob says he was drawn to being part of such a great cause despite having no connection to MND.

“It makes me realise how lucky I am to be able to run up and downstairs,” he said.

You can find the group of dedicated firies training at the Infinity Towers in Gungahlin on Sunday afternoons. They have to run it five times to equate to the distance of the Sydney Tower.

Motor Neurone Disease is the name given to the group of diseases in which the motor neurones (nerve cells) gradually degenerate and die. Each day in Australia, two or more people die from MND and more than two people are diagnosed with MND. It affects the muscles that enable us to move, speak, breathe and swallow. A person’s senses and intellect are not affected. 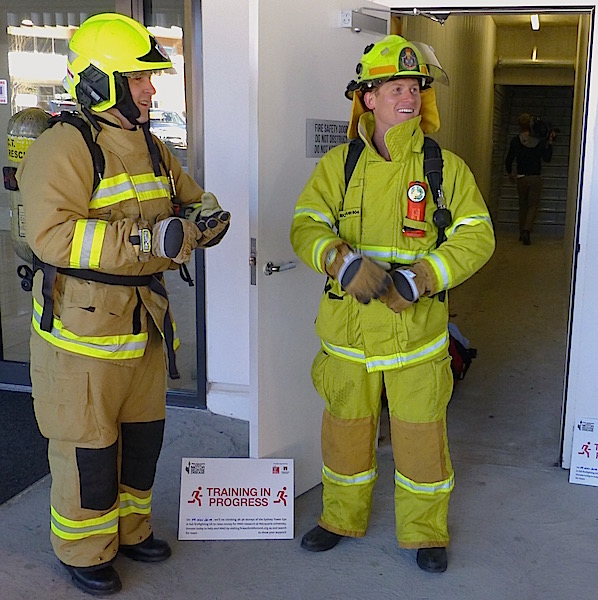 Queanbeyan’s James Rumble with ACT Fire and Rescue member Matt Buchtmann get set to tackle the stairs in training for the Firies Climb for MND later this year. Photo: Michael Weaver.

The Martini Whisperer - 2 hours ago
Lucky they’re weren’t in Texas. View
HiddenDragon - 4 hours ago
So the Big Merino will be the command HQ for Gilead Down Under - and they said it couldn't happen here......... View
Matt Parkinson - 5 hours ago
This is either satire at its finest or you are incredibly special View
News 19

Sam McCracken - 3 hours ago
Lea Powell agree to disagree then. We clearly see this from 2 different points of view, but if you re-read your comments you... View
HiddenDragon - 5 hours ago
Based on some of the apparently well-informed comments here about ACT public housing policies, it is truly fascinating to see... View
Lea Powell - 7 hours ago
Alicia Boardman exactly! View
Opinion 12

HiddenDragon - 3 hours ago
"The Pavlovian response to the sound of wheels rolling across floors as the trolley ladies made their way into the office and... View
Community 12

nickwest - 5 hours ago
Yes, lots of trams got replaced by buses last century. One example close to home is Sydney. Ripping out the trams was such a... View
News 5