Two strike teams from the ACT have deployed into areas to the south and west of Canberra as the ACT Emergency Services Agency (ESA) commissioner, Georgeina Whelan, said she would not leave the ACT exposed to fires currently burning in NSW.

After returning from an aerial survey of the fire grounds near Tumut yesterday, Commissioner Whelan said two ACT strike teams have deployed to areas where hot spots may pose a threat to the ACT today (10 January).

She said there has been “deep planning” with the NSW Rural Fire Service (RFS) to prevent fires from crossing the ACT border.

Commissioner Whelan said there would also be a total fire ban in the ACT for the duration of Friday.

She praised the firefighting efforts of ACT strike teams who had been working to subdue fire grounds surrounding the ACT since last week.

The only fire within the ACT was the Hospital Hill Fire, which started in the southern, remote area of the Namadgi National Park. It has now been completely extinguished.

“The fire was quickly contained and extinguished in difficult forested terrain thanks to a range of air and ground firefighting tactics,” Commissioner Whelan said.

She said the ACT strike teams would be would forward-deployed to areas where fires continue to burn near the ACT.

Australian Defence Force assets have also been supporting the ESA and NSW RFS.

“Engineers from the Australian Defence Force have been helping develop the containment lines in support of my plan which extends beyond the border here in the ACT,” the ESA commissioner said.

“Our forward-deployed strike teams are going into NSW to fight the fires that are the greatest threat to the ACT.”

Commissioner Whelan said she understood there was considerable anxiety in the community as to whether fires would encroach on the ACT today.

“We would not deploy any ACT assets without being able to withdraw them straight away if they were needed here,” she said. “I will not leave the ACT exposed.

“It is not lost on me the anxiety that is out there in the community, as a number of my staff and a number of firefighters lived through what happened in 2003.

“If you did a review of all the information that is out there in the community, I believe we are probably giving the best information in our country.” 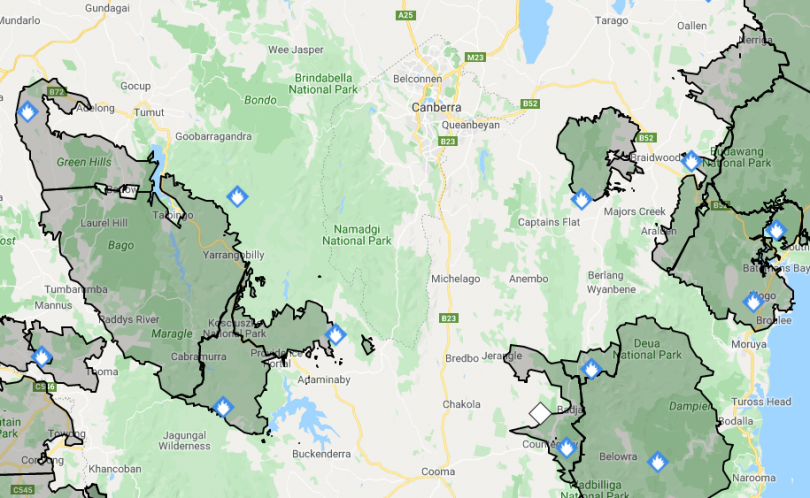 Fires to the west and south-west of Canberra pose the greatest threat. Image: NSW RFS.

“These fires do not pose a threat to homes in the ACT but we are aware that our rural landholders are concerned about these fires,” Commissioner Whelan said.

“A severe fire danger in the ACT will create difficulties for our firefighters today. Fires can start anywhere and do not understand borders. Fires do not appreciate boundaries and sometimes this can happen without warning which is why we need people to keep up to date.

“Our incident management team, helicopters and crews on the ground remain vigilant and on high alert.

“Together, we have the ability to predict fire behaviour and map lightning strikes after they occur. This allows us to remain alert, not alarmed. It also enables us to inform you at the earliest stage of fire activity in Canberra and surrounding NSW that may impact the ACT.”

ACT Chief Minister Andrew Barr reinforced the commissioner’s comments by saying the public should be reassured that every resource is on hand to prevent fires from getting into the ACT.

“We are expecting conditions to deteriorate today, but there is no immediate threat to homes in the ACT,” the Chief Minister said. 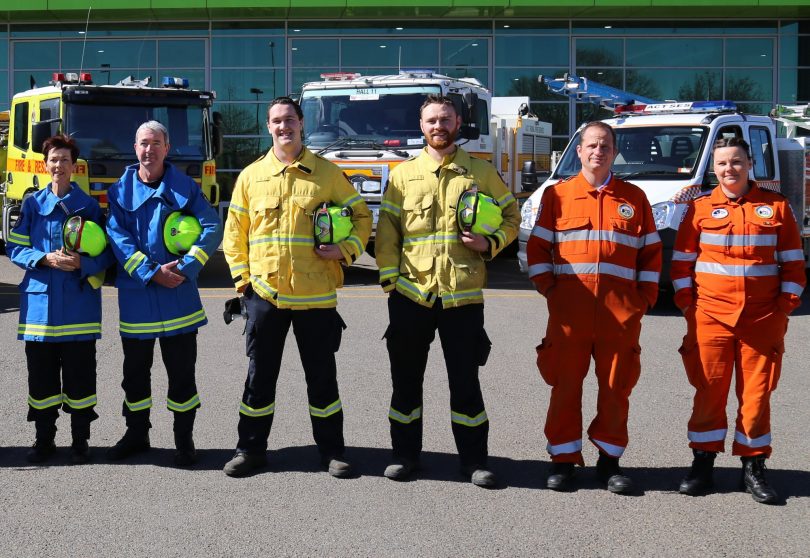 The friendly faces of the ACT Rural Fire Service (yellow), ACT State Emergency Service (orange) and ACT Fire and Rescue Community Fire Unit volunteers (blue) will be out in the community once again helping you prepare your bushfire survival plan. Photo: ESA.

The ESA has also opened community information centres throughout Canberra where volunteers will be on hand to help you complete your bushfire survival plan.. They will remain open until Sunday from 9:00 am until 5:00 pm at Belconnen Westfield, Westfield Woden, Southpoint Tuggeranong, Cooleman Court, Casey Market Town and Lanyon Marketplace.

The Dunns Rd fire is predicted to move East 25km towards the Brindabellas and Cotter area today alone. From there, it’s 35km to Mt Stromlo. If it travels that far, the front will be enormous and not some spot fire like Hospital Hill. It seems to me that the ESA Commissioner is downplaying this potential quite a lot, and this is resembling the lack of concern that lead to the 2003 fires. I’d be telling people on that Western side of town to start clearing up gardens etc just in case. 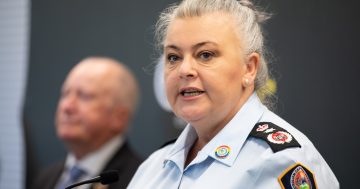