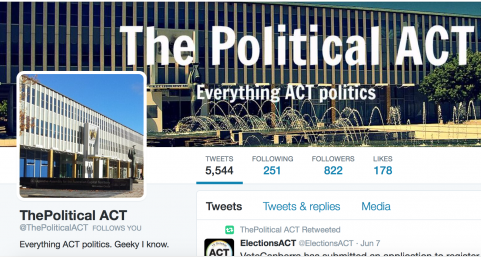 Former RiotACT regular and blogger at The Political ACT Richard Fox has this week joined the staff of ACT Transport and Municipal Services Minister Meegan Fitzharris.

While The Political ACT blog was still live this morning and remained active on Twitter until ten days ago, the site disappeared from public view this afternoon.

Fox started as a media adviser to Ms Fitzharris on Tuesday.

He told the RiotACT earlier today that The Political ACT and its related social media accounts would remain inactive while he was working for Ms Fitzharris, and by late this afternoon the blog had been “marked private by its owner”.

The site had been actively ramping up its thoughtful coverage of the ACT political scene in the lead up to the Legislative Assembly election in October until it went silent in late May.

Fox’s tweets at @ThePoliticalACT continued till June 7, and included several retweets of positive reactions to the ACT Budget as well as a tweet having a dig at the ACT Liberals about their social media style:

Fox ran unsuccessfully in Labor’s pre-selection last November. He was hoping to become a candidate for the October poll alongside Ms Fitzharris in the seat of Yerrabi, and like his new boss is a member of the right faction of the party.

The former Fairfax journalist was a member of the ANU’s media team until last week, and was still listed on their website as Corporate Communications Officer and ANU Reporter Editor earlier today.

ANU Strategic Communications Manager James Grubel spoke highly of Fox, saying he had overseen a successful revamp of the flagship ANU Reporter publication among other tasks.

Fox had served out his full notice period at the ANU and a replacement would be appointed within a few weeks, Mr Grubel said.

So my rates are being used to pay a blogger to do nothing of any benefit to my community?

” The site had been actively ramping up its thoughtful coverage of the ACT political scene in the lead up to the Legislative Assembly election in October until it went silent in late May.”.

“Thoughtful” ? Sorry, but not from what i read on it. Quite pro ACT Labor I would have thought. That’s no doubt why appointment to Ms Fitzharris’s staff – though they would never say that of course.

‘This person is a good writer but they are against our policies. Lets hire them as a media adviser’ said no politician ever.

” The site had been actively ramping up its thoughtful coverage of the ACT political scene in the lead up to the Legislative Assembly election in October until it went silent in late May.”.

“Thoughtful” ? Sorry, but not from what i read on it. Quite pro ACT Labor I would have thought. That’s no doubt why appointment to Ms Fitzharris’s staff – though they would never say that of course.

Andrew Pike - 30 seconds ago
ANDREI RUBLEV looked great on the giant screen but wasn't the last film. The very last film shown was a reprise of the very f... View
Andrew Pike - 3 minutes ago
Heritage value surely lies in the historical context and historical values, not in present-day opinions and current fashion o... View
Kytie Mclign - 15 minutes ago
Angelo Turcin You are the one who is begging to differ with experts. How about you explain why it isn't worthy of heritage st... View
Community 41

Mark Chapman - 1 hour ago
I just wish that "road-work" speed limits were only signposted when there is actual roadwork going on, not just a few witches... View
Chris Olsen - 1 hour ago
Clinton Berry Deemed but without the proof, but like the Barton highway, the dropped the limit to 80km/h and put up road work... View
Brian Woodbridge - 1 hour ago
Good story View
Sport 4

Cathy Read Whittard - 2 hours ago
Thinking of you Glen and family x View
Lauren Irvine - 2 hours ago
Angela. I’m so sorry to hear of the diagnosis. I have no words right now but just wanted to reach out. I work for the Leuka... View
Katy Did - 2 hours ago
I wish you all the best Glenn. Medicine can work miracles these days and new treatments are always around the corner so do no... View
News 13

Robert Knight - 2 hours ago
You cannot plonk in a greenfield suburb, built all at once, with no dedicated public transport corridors, an inbuilt car depe... View
What's On 7

Lauryn Roberts - 6 hours ago
Careflight is great to donate to . I’ve given up on salvos or Red Cross... but Careflight always help when people need it!... View
Lifestyle 2

It's taken 166 concrete bridge segments, but the last one was finally placed on the new Batemans Bay Bridge on...
Breaking 0

A passenger on the repatriation flight that arrived in Canberra on Thursday has tested positive for COVID-19, ACT Health said...
*Results are based on activity within last 7 days

Senator Zed Seselja has brushed off a challenge for the Liberals' No 1 spot on the Senate ballot for the...
Property 156

Negotiations over pay and conditions which could avert strike action are continuing between garbage collection company Suez and the drivers'...
Community 41

As COVID-stranded travellers continue to return home, Canberra is doing its bit by taking two planeloads of returnees this week....
Opinion 40

As summer approaches, ACT police are warning us that more Canberrans than ever have been caught speeding. They say, rightly,...
Motoring 37

It seems too many Canberra motorists are still rushing to meet police, with speeding offences bringing them to highway patrol...
Best of Canberra 36

From a humble mid-afternoon working class pick me up; high tea evolved to become an elegant afternoon soiree infamous amongst...
News 33