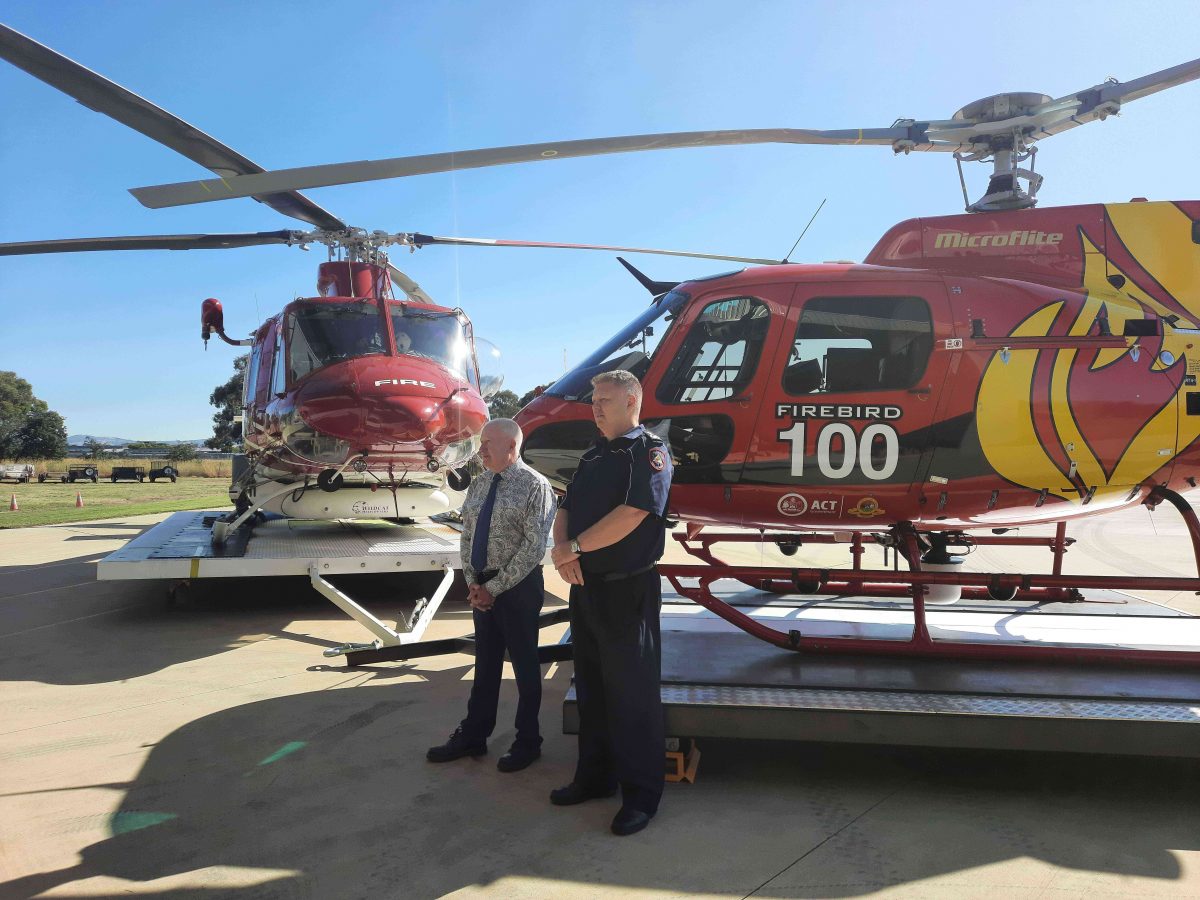 It’s been a late arrival for this fire season’s aerial workhorses and that’s been deliberate.

The ACT Rural Fire Service showed off two of the three helicopters today (10 January) that will keep watch on the ACT’s landscape for the next three months.

The third will take up its role in February.

ACT RFS Chief Officer Rohan Scott said the contract had been timed for when this season’s fire risk is at its highest after such a wet spring and early summer.

“We’ve been monitoring the risk, and as people will see, there’s significant grass growth out in the ACT and the surrounding areas that is starting to dry off,” he said.

“So that’s why we’ve delayed the start of the aircraft to be available to us to deploy in that heightened period of the fire season which is coming towards the end of this month.”

Already on the job are Firebird 100 and 101, the former for instantaneous intelligence gathering and the latter for firefighting, contracted through the National Aerial Firefighting Centre, Microflite in Victoria and United Helicopters in Sydney.

Equipped with an infrared camera armed with a laser pointer, it can detect lightning strikes, map the fire ground and, crucially, send information direct to the Incident Management Team at headquarters, saving valuable response time.

“So we’re picking up those lightning detections within hours rather than within days, and by the time they get detected days later, they’re actually a potentially significant threat,” Mr Scott said.

“It’s reducing that size for fires, and it’s detecting them early.” 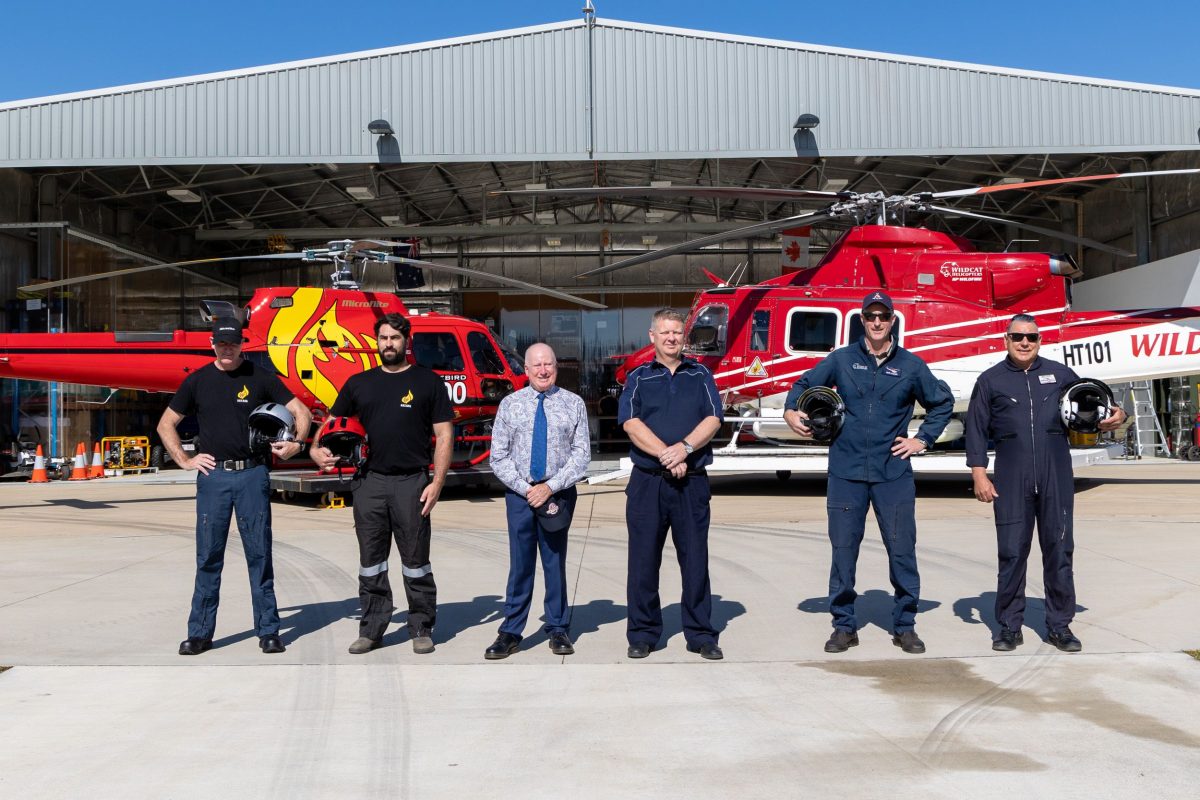 Mr Gentleman and Mr Scott with helicopter crews at the ESA’s Hume base. Photo: ESA

Emergency Services Minister Mick Gentlemen said the high-tech helicopter was a game changer that could be over a fire in 15 to 20 minutes providing a flow of information back to headquarters so mapping teams could forecast the fire path and determine the resources that needed to be deployed.

“It makes an incredible difference,” he said. “It’s an amazing advancement and welcomed by the ACT.”

It has also been used for storm response, memorably after the ferocious 2020 hailstorm, providing excellent damage assessment and intelligence for road closures.

The other two helicopters, 101 and 102, carry tanks for water or retardant, as well as a winch for inserting firefighters into remote areas.

It may be an ACT contract, but the helicopters’ range is not limited to the ACT, being part of a national firefighting effort.

As well as keeping an eye on NSW areas that may impact the ACT, NSW can call on the helicopters if they are not dealing with an emergency here.

Indeed, the ACT had proven to be a very good base for southern NSW operations, Mr Gentleman said.

The helicopters will also be seen over Canberra and the Brindabellas as RFS crews hone their skills.

Melbourne-based Head of Camera Systems at Microflite James Kagel knows the Firebird 100 and the Canberra terrain well from the 2019-20 bushfire crisis.

“It’s a pretty aerobatic platform and very maneuverable,” he said.

Mr Kagel said providing real-time data to the IMT enabled it to make better decisions about attacking and extinguishing a fire.

It also comes into its own when clouds of smoke obscure the fire ground.

He remembers flying over the vast Orroral Valley fire in 2020 and being blown away by the sheer scale of it.

“From above, you see smoke and fire as far as you can and with our camera systems in there to penetrate through the smoke with the thermal imaging and actually see that fire intensity that you can’t see with the naked eye, it’s pretty incredible,” he said.

“We’ve had significant grass growth that is starting to cure,” he said.

“Either review, or download your survival plan and create one. Those survival plans are not only beneficial for firefighting incidents, but also for storm and flood incidents as well.

“So it’s knowing what you would do as a family in the time of an incident so you can act in a timely manner and make yourself safe, whether it’s fire, flood or storm.” 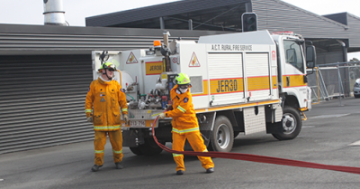