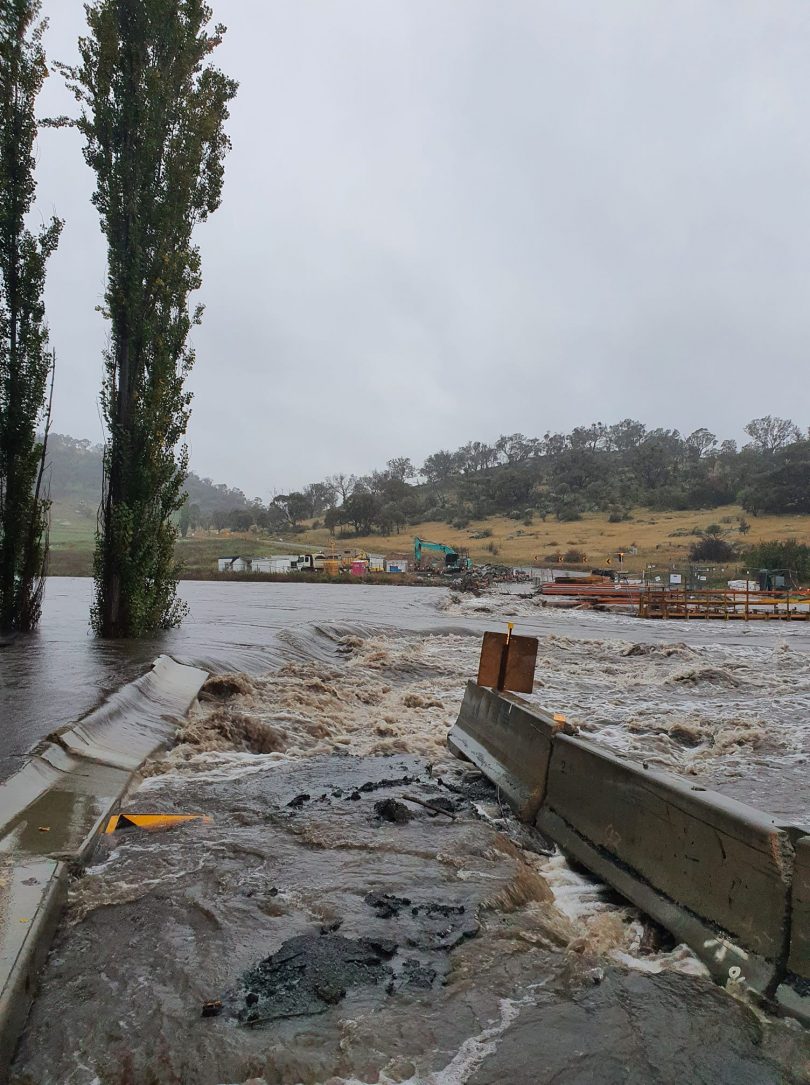 The extreme force of floodwaters has washed away a construction site in Namadgi National Park. Photo: Facebook.

Flooding and the possibility of high winds will mean that several parks in the ACT will be off limits to visitors this weekend.

The closures follow this week’s heavy rains which saw a number of dramatic rescues in floodwaters in the ACT region and led to police urging residents not to risk their own or the lives of emergency services workers – particularly those taking risks for nothing more than a photo.

“There is no photo or social media post that is worth risking your life to get,” he said.

“Any water rescue puts the lives of not only yourself but those of emergency services personnel at risk.”

The ACT Government has extended the closure of the following reserves until at least Monday 29 March.

Tidbinbilla Nature Reserve and the Namadgi Visitor Centre will reopen on Saturday 27 March.

The ACT Parks and Conservation Service says it will continue to assess the impact of flood waters on the environment and community assets over the coming days and those assessments will guide any decisions on possible extensions to closed areas beyond Monday.

“This decision has been made for the safety of the Canberra community,” the spokesperson said.

“There has been a large amount of rainfall over the past couple of days which has saturated soil in the region and the community should take extra care when out in open areas of Canberra Nature Park.

“Flood waters can occur suddenly and without much warning, leaving you trapped or stranded if you are unprepared. Steer clear of low-lying areas such as creeks, stormwater drains or other causeways.

“Strong winds are dangerous and will move fallen trees unpredictably and can even topple or uproot standing trees.”

Residents are urged to stay up to date with road closures on the ACT City Services website, take care on roads, and follow all signage and alternate routes provided.

What a joke. There’s nothing parks and services enjoy more than snap closures of our parks and reserves. Always accompanied with ubiquitous claims about concern for safety of the community. Closing bridges that are flooded or in danger of flooding, sure. But closing off entire areas, without any other specific reason? Come on.
As the previous commenter mentioned, Namadgi now closed for over a year. Indeed large areas scheduled to remain closed until 2023, believe it or not. Why in the world do parks and services need to close entire swathes like Orroral or Gudgenby Valleys, just because they want to repair particular sites or paths in it? And as usual, no reason given at all, beyond vague proclamations about “safety”.

Yeah, like parks and conservation needed a reason to close everything, other than they can’t be bothered doing their jobs. Most of Namadgi has been closed for over a year now, for no actual reason.