Floriade 21 – Films that shaped our nation? Pictures and thoughts. 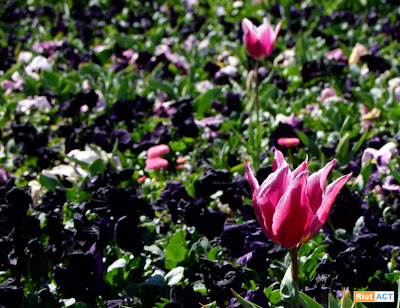 There are a few of things which make Floriade such a beloved part of the Canberra calendar.

The rest is, frankly, crap.

Armies of public servants trying to justify their worthless existences keep layering more crud onto proceedings and their efforts one day will sink the whole concept. But it is not yet that day.

The ever more execrable themes have reached a bit of a crescendo this year with “Films that shaped our nation”.

Australian made films. So they really themed it as “Films which we haven’t watched either, but we like to talk about at cocktail parties”. Are you inspired yet?

In some cases, such as Priscilla and The Dish the theming of the flower beds works really well (perhaps not coincidentally because they actually were widely watched and influential films).

In other cases shabby props have to give onlookers a cue, and they make the whole thing look a bit like a third rate roadside theme park.

But the daffodils are an endless joy. And the tulips that are out always impress. And it’s great fun for photographers.

If it’s a nice day, and you have nothing else to occupy you, then it remains a pleasant way to kill an hour.

18 Responses to Floriade 21 – Films that shaped our nation? Pictures and thoughts.
Filter
Showing only Website comments

Floriade parking is a disaster.

I would be so annoyed if I was a tourist who had paid to come to Canberra for Floriade, then drove around all morning looking for a park. And this was on a weekday – I bet weekends are worse.

The govt needs to get a bit creative – a shuttle bus from civic would be a good idea. Or even one from EPIC.

The rest of Floriade was great though – beautiful day, picnic on the grass, free farm animal zoo for little kids, kiddy craft zone, little rides – and gorgeous flowers! (Not all out yet tho – wait a while if you only go once.)

… if they must have Art, just have bloody art and bung it around the place.

I would love to see a ‘Malcolm’ display.

Is there an Alvin Purple display?

I was just looking at the giant popcorn going, “What the …?”

Man of Flowers is boring and would put everyone to sleep!

Anyone else out there mentally linking to “Day of the Triffids”?

Yes, we’ll have to nip that in the bud.

As part of the Floriade Nightfest they should show Paul Cox’s 1983 depiction to a rich old man with a love of flowers, and of nubile women – “Man of Flowers”. This would be a neat link between Australian films and flowers.

I would like to see how ‘Man of Flowers’ could be interpreted into a floral display for Floriade.

Granny,
I love how you mind works !

It sounds like the inanimate objects of Floriade are waging a War On Canberra, like some B-grade horror movie. This could be just the beginning ….

Like most years, if you squint a little, and tilt your head slightly to the left, you might (and only might) stand a better chance of “getting” the flower beds.

Ventured forth to Floriade this morning, and have to say that the increase in picnic-style seating, and better placement of coffee stops (and toilets) is definately an improvement. The lack of raised viewing platforms, however, definately a minus.

Hiding the Floriade 21 tent down the Ferry Gate end is kind of awkward – would have thought this better placed somewhere that says “hey – we’re 21 and proud of what we’ve done”. Then again, it does at least put something of interest at that gate, rather than just watching the monster carp in Nerang Pool.

Whilst at first thinking that the new “gates” that welcome/farewell the visitors was a nice idea, I doubt these will be a return fixture – a particularly strong gust of wind blew one of these overat the main gate, and a volunteer was knocked to the ground by it. The onsite first-aid was there very quickly, and hopefully said volunteer was not seriously injured.

All in all, always worth a visit or two.

I love the sign about Rotary proudly serving the Gnome Community …. *chuckle*

One of those giant steel and plastic tulips at the corner of Northbourne and London Circuit almost snapped off in last night’s winds and was lurching over to dong passers-by and traffic at lunchtime today.

It didn’t help that the government had attached a giant banner between it and the next one that acted like a Sydney-Hobart yacht spinnaker.

The cops had to come and block off the street to forestall giant-flower induced mayhem.

Spoke too soon. all fine now!

The slideshow doesn’t seem to be working.

Greg Freeman - 1 minute ago
Canberra always has had the worst drivers View
Liam O'Toole - 6 minutes ago
ACT Policing is probably the laziest police force in Australia. You never see them in the territory but as soon as people cro... View
Carn Ruglrass - 12 minutes ago
As a cyclist, motorcyclist and motorist, all I can say is. Canberrans - you suck View
News 15

DrLin - 12 minutes ago
Foresight serves you well, I received notice yesterday of a 12% increase to the price yesterday. View
Property 17

Carlie O'Shea - 38 minutes ago
Kristy Keft is this your pub you rave on about? 😂 buy it View
Ben Lindsay - 1 hour ago
Neil Willis could almost walk to work from your joint View
Peter Taylor - 2 hours ago
Amanda Sanderson. Short commute. Walk to work, but getting home would be a struggle. View
Property 12

John Moulis - 45 minutes ago
They must have a lot of pull. Even people on Sydney's upper North Shore who want to remove trees which are blocking the view... View
Pam Dovey - 50 minutes ago
Margaret Hunt did you see this? View
Run_W - 2 hours ago
Wasn't this the Club that was complaining last month about being broke and if someone put planes on the lake it would mean th... View
News 7

Lewis P Owlay - 2 hours ago
I believe you mean the Delta Myna View
Lyndsey Simcoe - 3 hours ago
Graham Hatch see! They are psychos! View
Acton - 11 hours ago
Pigeons, those flying rats, are also pests. Growing problem with them nesting and crapping under solar panels.... View
News 12

Ben Johnston - 10 hours ago
"In a 50-minute ministerial statement this morning (22 June), Business Minister Tara Cheyne told the Legislative Assembly tha... View
summs - 12 hours ago
At least 15% of the budget went to 19 (2%) businesses whilst 23% of the businesses received less than $50? Was the scheme int... View
Lewis P Owlay - 12 hours ago
Worked a treat View
News 8

The Canberra Southern Cross Yacht Club in Yarralumla is about to set sail on a redevelopment of its lakeside hospitality...
*Results are based on activity within last 7 days

Sitting on a bunk bed in Australia's first sleepbus for women - before a single homeless woman, her children and maybe...
Opinion 50

@The_RiotACT @The_RiotACT
If you use your phone and drive you will get caught, Transport Minister Chris Steel said after new laws allowing mobile detection cameras in the ACT passed the Legislative Assembly this week https://t.co/zYUIF8PzLk (26 minutes ago)

@The_RiotACT @The_RiotACT
The Safe and Connected Youth Program has been an outstanding success for Canberra families in conflict, but funding could soon run out on 30 June https://t.co/4xL3XjKfiz (1 hour ago)