Food waste the latest front in the ACT's war on emissions 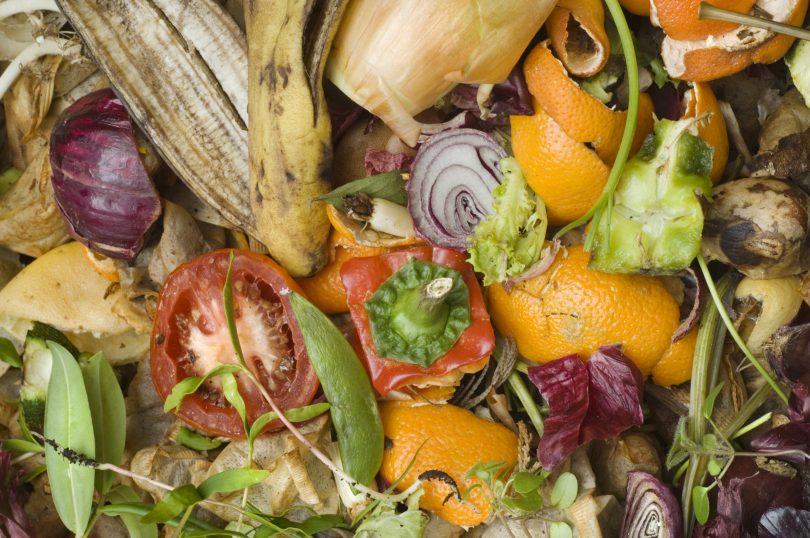 Currently 37 per cent of our garbage bins is food waste and it’s going into landfill. Photo: File.

The ACT Government is developing a scheme to stop 15,000 tonnes of food waste from local hospitality and food retail businesses ending up in the ACT’s landfill each year.

The ACT Government said its proposed scheme will require large producers of organic waste, like cafes and restaurants, to have a mandatory, separate collection of organic food waste in line with other cities around the world.

The ACT Climate Change Strategy 2019-2025 said the ACT Government will develop and consult on the food waste collection scheme by 2023.

Closer to home, the City of Melbourne introduced food waste recycling in its iconic Degraves Street, diverting around 130 tonnes of food waste each year. Two-and-a-half tonnes of food scraps from 90 businesses in the precinct are dehydrated and turned into fertiliser each week, then spread on parks and gardens throughout the city.

City Services Minister Chris Steel said he is keen to work with key stakeholders and the community to explore options to collect organic waste from homes and hospitality businesses.

“Now that we have 100 per cent renewable electricity, waste will be the third-largest source of emissions,” Mr Steel told Region Media. “We’ve rolled out a garden waste collection service to the whole of Canberra and now we’re doing the work necessary for a food organics service to divert food from landfill.

“Currently, 37 per cent of our garbage bins is food waste and it’s going into landfill. Food waste is actually a really valuable resource, and there are great opportunities to use this resource better, to grow the food of the Canberra region and help reduce emissions at the same time.”

Mr Steel said $973,000 was allocated in the 2019-20 ACT Budget to undertake a pilot food waste avoidance campaign next year targeted to households, as well as a feasibility study into the delivery of a food organics and garden organics processing site and facility.

Organic materials such as food scraps and garden waste break down in the landfill and release methane, a potent greenhouse gas. The ACT landfill at Mugga Lane is fitted with a facility that captures 70 per cent of methane and uses it to generate electricity. The remaining 30 per cent of methane escapes into the atmosphere.

When the ACT has zero electricity emissions, the strategy says waste treatment will account for four per cent of emissions.

Mr Steel said the ACT Government is working with federal, state and territory counterparts on the implementation of the 2017 National Food Waste Strategy. The strategy aims to halve food waste in Australia by 2030.

You have copped a smell of it too then?

Recently, the Lake Macquarie City council added food scraps to its waste treatment services at the Awaba Waste Management Facilty but the radical plan to recycle its residents’ food scraps is “on the nose” and under review after a cloud of “vomit-like” smell was detected by many residents at Coal Point.

Sounds like a carbon-copy of what happens almost daily here in Canberra and this is why the MLRMC must not be expanded to include recycling of food scraps, in fact the MLRMC will soon have to closed down completely due to climate change exacerbating the inversion layer presence in the nearby Tuggeranong Valley.

This is a good first step. Will be interesting to see what they do with the waste. In the meantime, if anyone is interested in reducing the food waste sent to landfill, check out http://www.sharewaste.com to see if there’s someone who wants your food waste for their chooks/compost in your area.

I have just listed for my compost bin. I will see if I get any responders. But I don’t understand why everyone with a house and garden doesn’t compost themselves.

Julie Macklin me either. I collect about 80 litres a week from people in my neighborhood!

Anne Gibson Wow, that’s a lot. A few weeks with that much and I will need to put a halt to it.

Great 😁
Could they also provide green waste bins and solar panels to housing tenants, especially those in complexes. How are we supposed to get a leg up and move on from housing if our residences are so ridiculously poor on energy efficiency that we’re swamped by large electricity bills. We’re already behind since energy efficient appliances are well beyond our affordability and many are forced to send green waste to landfill as transporting it to Mitchell or Hume isn’t logistically possible.

Stacey Ingram fair point. Perhaps there should be a minimal EER for rentals and commission housing.

Frances Jane I do believe that there is for new dwellings, however, older homes and townhouses are ignored unless something actually breaks. Unfortunately.

Stacey Ingram yes, I can imagine. Older places tend to be the more affordable ones, and so they ought to be covered under such a policy too.

Frances Jane Then they won’t be “the more affordable ones” any more.

What about organising things so green waste collections from homes can include food waste too?

In the meantime, check out http://www.sharewaste.com to see if there’s someone who wants your food waste for their chooks/compost in your area.

We also used ShareWaste to find neighbours who would like our food scraps – they generously share their fresh eggs with us in return.

Thank you for pointing me to this-had no idea this existed. Excellent!

Proud to live in a state (territory) that has a progressive government with actual policies for the future. I assume they’ll be voted out next election on the back of a scare campaign about rates

Gray Jay one can only hope…🙂

Great to see more sustainable options being explored, be it commercial composting or vermiculture, either way it should hopefully reduce the emissions creating through the anaerobic process of rotting food scraps. https://www.theguardian.com/environment/ethicallivingblog/2008/apr/18/compostorganicwaste

Nick James I believe the way it breaks down in land fill creates much more emissions. When put into compost and treated properly it breaks down in a cleaner way. They can also build a compositing facility that catches the methane gases to use for cooking and heating.

Nick James Here’s some information about why composting is so much better than sending food scraps to landfill. Composting food scraps and organic material is an aerobic process (in the presence of oxygen) that reduces or prevents the release of methane during organic matter breakdown. Methane is a greenhouse gas 26 times more potent than carbon dioxide and is a significant contributor to global greenhouse gas emissions. Composting does not produce methane because methane-producing microbes are not active in the presence of oxygen.

However, when organic material decomposes in anaerobic conditions (in the absence of oxygen) such as landfills, it releases methane into the atmosphere. Therefore composting organic material with oxygen rather than sending it to landfill reduces the release of greenhouse gases.

Global emissions from waste have almost doubled since 1970 and now produce 3% of anthropogenic (human origin) emissions (IPCC 2014). About half of these emissions come from the anaerobic fermentation of solid waste disposal on land.

No mention yet of where the organic waste is to be “processed”. It’s a stinky business so it better be well away from Canberra. 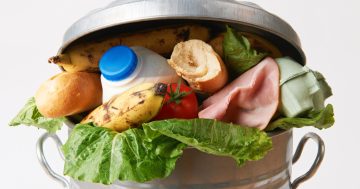 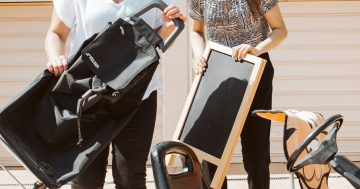