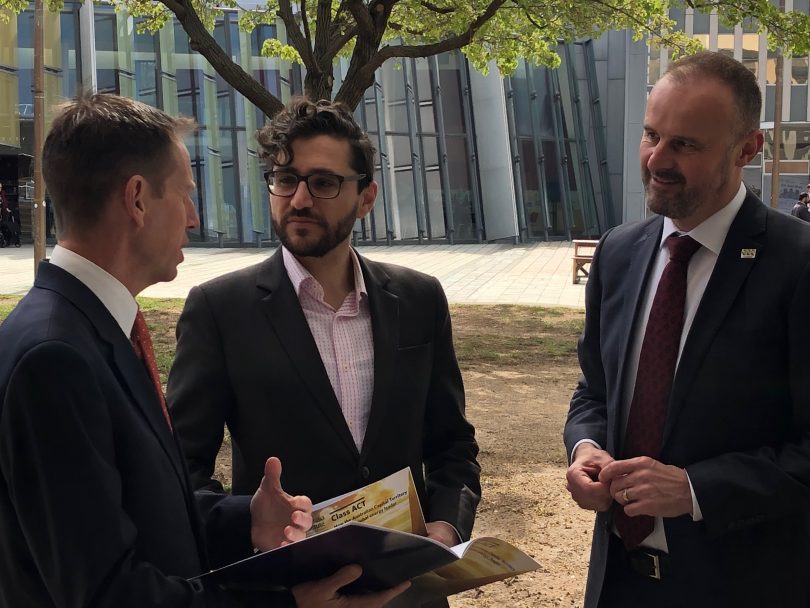 The ACT is set to join the exclusive club ‘100 per cent renewables club’ alongside Rhein-Hunsrück, Mecklenburg-Vorpommen, Extremadura, Burgenland, Carinthia, Schleswig-Holstein and Lower Austria, according to a new report from The Australian Institute.

When stage three of South Australia’s Hornsdale Wind Farm comes online on 1 October, the ACT will become the first major jurisdiction outside Europe to transition from a fossil fuel-based energy supply to 100 per cent renewable electricity, nearly two months ahead of schedule.

The territory will join three jurisdictions in both Germany and Austria, and one jurisdiction in Spain in achieving complete, clean energy.

While some jurisdictions have achieved 100 per cent renewable energy based on historic investments in hydroelectricity, the report said the ACT will join a select few to have made the transition from a fossil fuel-dominated energy system to renewables.

“The ACT Government is leading the transition to clean energy,” Mr Merzian said. “The report shows that states and territories are leading the way on climate action while national governments often lag behind. Australia is a perfect example of that.

“While some federal parliamentarians are trying to hit the brakes on Australia’s energy transition, even Parliament House will soon run on 100 per cent renewable energy.”

Mr Merzian said the ACT has provided a working example that other state governments are starting to copy; in particular, Victoria and Queensland. ACT Minister for Climate Change and Sustainability Shane Rattenbury said he was happy for other governments to follow the ACT’s lead.

“I think many people are unsure how to do this so we want others to copy us,” Mr Rattenbury said. “We are perfectly happy if they copy what we have done because I think we have provided a template that is effective but also cost-effective.”

Mr Rattenbury said he believes the majority of Canberrans are proud of the ACT Government’s achievement of 100 per cent renewable electricity, saying that it offsets their frustration towards the Federal Government’s lack of action.

“I think Canberrans love the delicious irony of the fact that from now on, all the politicians on the Hill who are talking down renewables will be working in a building that is 100 per cent powered by green energy,” Mr Rattenbury said.

Chief Minister Andrew Barr said the ACT reaching its goal was a symbolic statement to the rest of the nation that the national capital will continue lead in this area.

“This achievement reflects the culmination of a pretty significant journey for this city,” Mr Barr said. “We are seeing jobs created in industries that didn’t exist in our city 10 years ago and we are seeing more energy produced in our region.

“Previously, we were a very significant importer of power across the Eastern seaboard and while we still remain an importer of power through renewable sources, we are seeing more energy generated in Canberra and the region.”

The Australian Institute said jurisdictions in the Netherlands, Sweden, Norway and Uganda are expected to join the ACT in the to 100 per cent renewable electricity club next year.

“Garry Webster i did work for them over a period of years. It was nowaste 2010, 12 and 14 before they gave up putting dates behind it.”

I guess that isn’t in your CV then?

Lets see what it costs

So where does our power come form at Night?

@ richard algis Having moved to Canberra from Sydney, I’m happy to pay the extra rego costs. Here in ‘The Berra’ my car moves at four times the speed as I used to in Sydney on my peak hour commute. I can leave home an hour later to get to work and be at home with my family an hour sooner, 5 days a week. I’m more than happy to pay the extra rego for that precious time. You ‘berrans’ really have no idea how good you’ve got it until you try sydney.

What would I see that would change in respect of “helping the planet”?

well its time to put up or shut up, how many 10s of thousands of your wage are are you putting towards helping the planet?......i thought not.

All hail the incinerator!

Not to forget the ripoff feed-in tariff paid for rooftop solar generation combined with the equally ripoff daily network charge.

Best idea is to continue ‘natural’ woodfire burning and kill off the population altogether with the current Belconnen-based asphyxiation program encouraged by the ACT Environment Playgroup Authority. Nothing like renewable carcinogens and particulates to kill off the kids and seniors.

I remember the 'no waste by 2020' campaign, tips will be a closed. Magnificent stuff.

Garry Webster i did work for them over a period of years. It was nowaste 2010, 12 and 14 before they gave up putting dates behind it.

Great. The plants can enjoy living here when the people move away cuz it's too expensive to pay rates (y)

We can all commute on flying pigs !

Jake Misell and this is one of the many reasons you should move here....

Nuclear power is an alien concept for the ACT Green/Labor politburo.

Lol people whine incessantly on here about the cost of the tram….. imagine if someone decided they wanted to build a nuclear reactor. Talk about fallout.

It would be a good idea because the ACT could then become a net exporter of clean, renewable, base load electricity Like the rest of the world has) and it would be non-dependant on sun and wind. The solar farms could be closed down and apartments constructed over the vacant land. We could also earn enough money to reduce our rates and provide free power for the Tesla in eveyrone’s garage. The waste could be buried at MLRMC along with the other toxic stuff like asbestos, crappy nappies, flat-pack furniture and culled kangaroos.

The line “The territory will join three jurisdictions in both Germany and Austria, and one jurisdiction in Spain in achieving complete, clean energy’ is interesting .

Europe has a staggering 186 nuclear power plants ( November 2016 figure ).
Of these France has 58, Russia 36, ever so pristine Switzerland 5, and ever so green Sweden with its young lady crusader,10.
Germany and Spain have 15 between them.

So unless your off the grid, I’m not sure these other jurisdictions can really say they’re using complete green energy.
Bit like us really.

And here’s a site to look at.
https://www.euronuclear.org/info/encyclopedia/n/nuclear-power-plant-europe.htm

Apparently the plan is to get rid of gas too. There'll be a lot of complensation to be paid to the likes of us if that happens. Many people I know have invested heavily in gas heating.

Anne Daun over the next 35 years - ie. well past the replacement age of existing appliances.

There is no “climate emergency” in the Snowy Mountains.

BREAKING NEWS: Perisher’s natural snow depth has hit 2.25 metres, making for some of the best September snow conditions in 20 years and the’re extending the season.

With this extension, it will be Perisher’s longest season in memory and again providing the longest ski season in Australia!

“We also have the cheapest retail electricity in Australia at about 23c/kWh. NSW is 33c/kWh!”

I would prefer to pay the NSW rate and get the guarantee of NSW coal fired base load. We have had a few unexplained power outages in Tuggeranong in the past few months; only for a short time but unexplained and annoying.

It’s a good thing that very little renewable energy is generated in the ACT because there is little sunlight and no wind here today.

We also have the cheapest retail electricity in Australia at aboiut 23c/kWh. NSW is 33c/kWh!