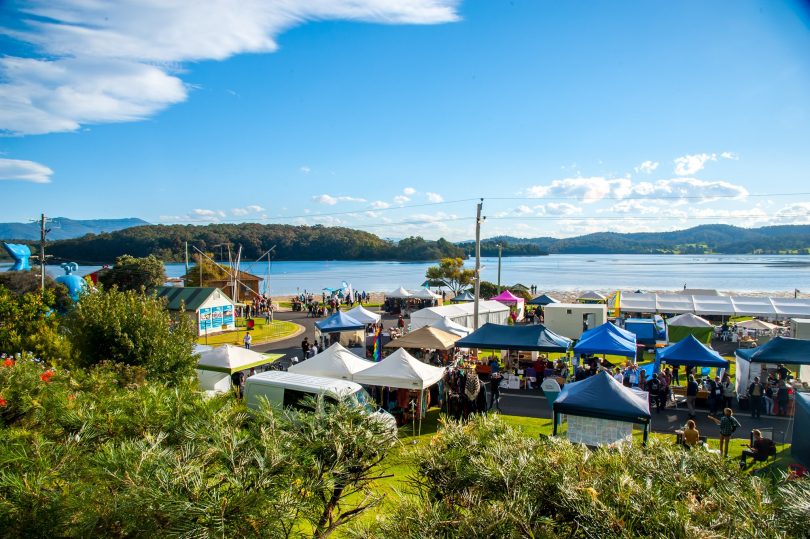 Mouths will be watering at the news the Narooma Oyster Festival is returning on 30 April to 1 May 2021 with a top line-up of chefs, oyster farmers and producers.

The festival has attracted thousands of people each year and will be held in the Wagonga Inlet, Narooma and celebrates NSW South Coast oysters and the region’s natural quality produce, chefs, and rich artistic and cultural talents.

Highlights this year will include the Cooking Program which celebrates the relationship between producer and chef, matching local producers with some of the country’s most respected chefs including Sean Connolly from The Morrison Bar & Oyster Room in Sydney. The festival is set to announce further headline chefs later this month.

“It’s incredibly exciting to be able to attract chefs with an international profile like Sean and confirms that the festival has come a long way from the small community-run oyster festival it was a decade ago,” she said.

“The Long Table Dinner on the Friday night sold out in three minutes so we have organised a second dinner to keep up with demand.”

READ ALSO: A rocking good reason to head to Tumut in March

Festival-goers will be able to taste oysters from six local estuaries and try regional wines, craft beer and produce from a large variety of food stalls while enjoying live music. Festival favourites like the shucking competition, oyster masterclasses and fireworks show continue to be a part of the festivities.

A new collaboration with the region’s River of Art will add live mural painting, cultural dancing and an arts alley to the festival’s atmosphere.

To meet COVID-19 requirements and streamline the entry, all tickets must be pre-purchased online and visitors are being advised to plan ahead as the event will be cashless.

Maryane Bogovic Ana CerinaMarianne Hartley Alejandra Brown Don’t we have tickets for this from last year?

Kristina Micallef I think it was the food and wine festival

Kristina Micallef i would love that but I think ours is a different one in October? Not sure though.. 🤔

I think you are right Alejandra Brown

Sweet! A girls trip in October :)

Harvey Perkins - worth a trip...

Nick Pokarier can we please go!

Keily Anderson let’s do it!

Already getting ready! Flip Dover Do you like oysters?

Samantha Ludwig let’s go! I’ll just have a pie or something

Kelly McGrath - 25 minutes ago
Christine Young my mother and father inks got “free trees” from the govt 40 years ago! We now have the 2 biggest gum tree... View
James Vetos - 1 hour ago
Quite a few comments about price per tree. Does the total cost include the planting of the tree and ongoing follow ups to wat... View
Doug Hovi - 2 hours ago
That’s a lot of trees and a lot of roots. Isn’t most of ACT’s power supply and pipes underground? 🤔 View
Lifestyle 15

Clever Interrobang - 2 hours ago
It’s just politics, ending the lockdown or extending it will upset one group or another no matter what. It’s a delicate b... View
Clever Interrobang - 2 hours ago
The point of having inalienable rights is that they can’t be taken away by will of the mob. View
chewy14 - 3 hours ago
JC, Thanks for pointing out that the ACT is not following the National Plan. And no the ACT "plan" is not nearly the same as... View
Business 2

@The_RiotACT @The_RiotACT
One look at this week's newsletter and you'd think kangaroos had taken over Canberra... hop to it! Subscribe now for all the latest stories straight to your inbox https://t.co/XVdXBWjSeq (14 minutes ago)