it was a scrappy game, with richmond fielding a team of schoolkids.

their forward line had a total of 0 afl games between them.

but their were lots of rookies on both teams.

for a bizarre and unpublicised reason, the kingston gate was not open, requiring patrons to walk all the way around to the gate near the services club.

because of this i missed the start. not impressed.

sydney played spida everitt in swans colours for the first time (no 10). he had a good game. so did goodes. 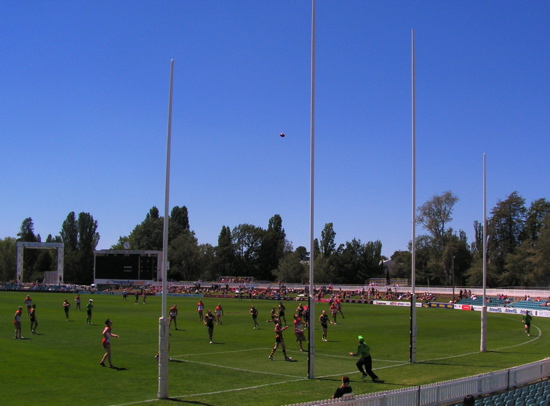 keep the eyes on the pill. for some reason there were 8 umpires on the paddock. 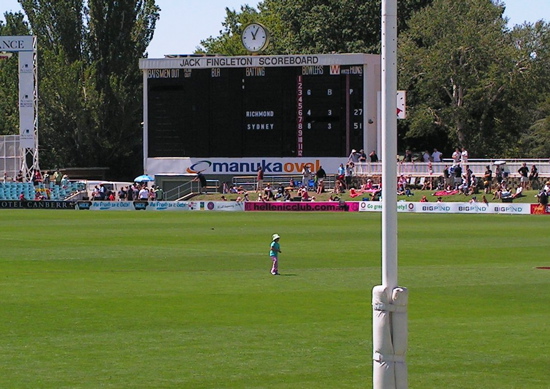 this little kid busted onto the ground… 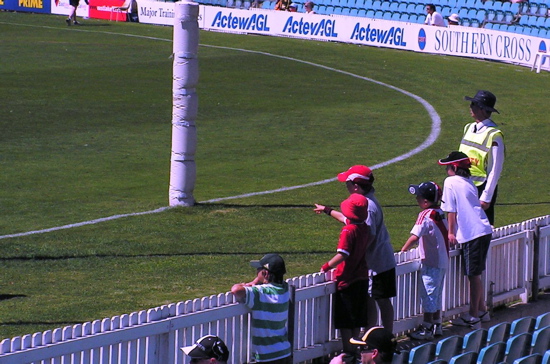 so the security kept a close eye on this group. they use sophisticated profiling techniques in manuka oval security. 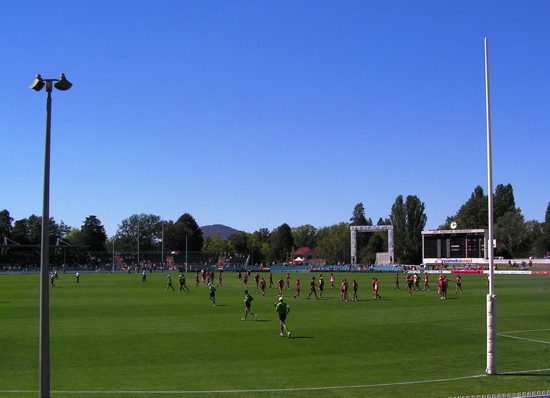 you know those nice player/position guides you see in the record ? on the ground they bear no relation to reality. its just a mass of players in a line from goal square to goal square. 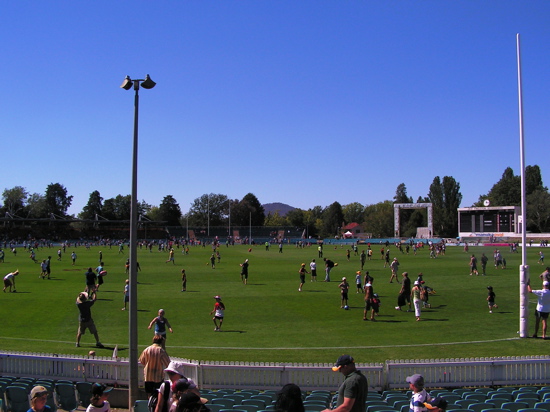 one of the best things about going to the footy as a kid – running around after the final siren and reenacting your favourite royce hart goal.

10 Responses to football at manuka
Filter
Showing only Website comments

At least we don’t have to put up with Eddie’s Pies ’cause they’re just plain sh!t! 😉

Good to hear there is another Blues supporter around in the ACT LeSuede. Too many fair-weather supporters here in Canberra.

Go the Mighty Blues! Lets hope it’s not a false dawn and they finish bottom again.

All pies are crap unless they are Villies!

so does this make it 2 afl games from the 5 that we are getting? or does that not start until the actual comp begins?

four n twenty pies are rubbish things. what even worse fare is served up at sunny manuka these days? must be right crap!

thats not bad for a non-NAB practice match.

I’m sure I heard something on the radio on the trip into work today, about a nutritionist (Melbourne i think )that wants Pies taken off the menu at footy matches.
But then again I was still sleepy, could have imagined the whole thing ….

Candace Aitchison - 4 hours ago
Lucy is amazing!! Such a beautiful young lady! It’s always such a pleasure going into the chemist 🙂 Congratulations Lucy... View
Anthony Crocker - 10 hours ago
I’ve always found her very helpful, friendly and knowledgeable. Congrats 🥳 View
Phyl Oliver - 11 hours ago
Congratulations Lucinda, you are at the best chemist ever! View
Sport 5