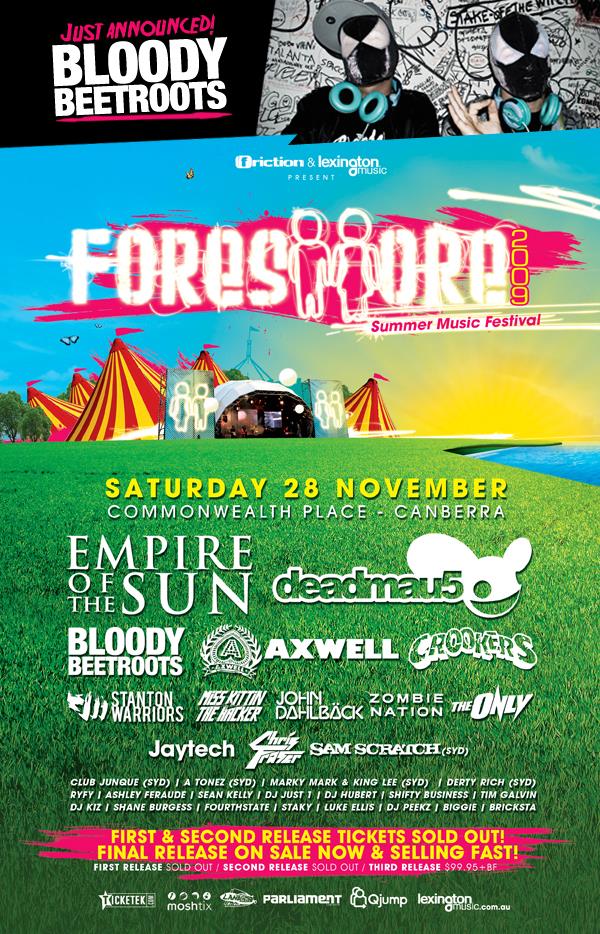 My last Foreshore was in 2010. Work took me overseas for 2011, but when I returned in 2012 Foreshore had been moved from the lake to Stage 88. After that it never returned.

Foreshore should have been a sure thing for Canberra. With established and celebrated local talents like Peking Duk and Safia, a population of 350,000 and multiple universities, why are there no Foreshore-like events targeting younger Canberrans? Why do we have to haul ourselves up the highway for the annual Tour de Doof Doof every summer?

I know some of you will mention Groovin the Moo, and there are no issues there. But the great thing about Foreshore was that it was it was a summer festival unique to Canberra and we bloody loved it. It attracted people from the surrounding regions and stimulated plenty of post-winter spend in the capital.

I investigated a few possible reasons why Foreshore said farewell and discovered that in 2013, its directors said the event was on hiatus until the perfect line up and other factors could be delivered. While this wasn’t possible in 2014, you never know what’s around the corner in 2015.

Rather than taking a build it and they will come approach, music lovers – either through lobbying or other means – should do their part to make sure Foreshore returns again soon.

One Response to Foreshore, Canberra misses you. Please come back
Filter
Showing only Website comments

I think with the ownership/management changes at kicks, and the ACT government making it as difficult and expensive as possible, the days of Foreshore/Warehouse, etc are numbered.

Patricia Bourke - 44 minutes ago
It’s disgusting. We have the money that just on things like Corman to fly around the world I know that’s federal but the... View
Fergus Thomson - 21 hours ago
Bek Clark I dunno about that, but after a series of operations, nurses are my heroes - I couldn't do what they do daily (incl... View
Opinion 107

steveu - 13 hours ago
Rego is a small part of the charge we get each year - most of it is insurance. View
News 3

Maya123 - 21 hours ago
Plastic is a huge amount of waste. McDonalds say they are going to phase out plastic cutlery by year's end, saving as much as... View
Elizabeth Martin - 21 hours ago
All these comments that indicate they couldn’t even read the headline. It’s for public events - ie Floriade, Enlightened... View
News 6

Michael McDonald - 22 hours ago
Oh. 10 million. Thatll do heaps View
Louellyn Violet - 22 hours ago
Better goto replanting the damage View
Brent Hunna - 23 hours ago
Maybe they could use it to rebuild those homes in NSW they lost because of this fire that jumped the border. View
News 6

Paul Conn - 23 hours ago
Glenys is a great manager and one of the nicest senior colleagues I ever had the fairly brief pleasure to work with. View
Deborah Gale - 24 hours ago
A great boss and a nice lady. View
Lifestyle 22

Sean McGrath - 24 hours ago
They are a gimmick and will 66 soon vanish like a Footsal pad. View
Arleen Stark - 1 day ago
Considering the lonely scooter I see every day abandoned all over the city, I reckon it would take days, not hours, to find t... View
show more show less
*Results are based on activity within last 7 days

Canberra is in for a big weekend, with TEDxCanberra presenting a fascinating talk on Sunday, the Trading Card Fair and...
Breaking 0

UPDATED 12:20 pm: The frantic efforts of neighbours and emergency services were not enough to save a 70-year-old woman who died...
*Results are based on activity within last 7 days

From a humble mid-afternoon working class pick me up; high tea evolved to become an elegant afternoon soiree infamous amongst...
Community 23

Five new and improved playgrounds in Torrens, Higgins, Waramanga, Richardson and Narrabundah will give Canberrans more areas to play and...
News 18

@The_RiotACT @The_RiotACT
Buy local and help your community's small businesses this Christmas, says a campaign urging us to Go Local First with our shopping dollars https://t.co/yRiIDzs8r3 (23 minutes ago)

@The_RiotACT @The_RiotACT
On the oldest continuously farmed property in the ACT, the future is in the hands of a new generation. We find out what that future looks like https://t.co/9rPPFx6TVE (2 hours ago)

@The_RiotACT @The_RiotACT
The boobook owl's call is familiar to many Canberrans, but did you know these powerful hunters can capture rosellas and even possums? https://t.co/VDp0ewv1Jf (4 hours ago)