Zach Rolfe at his police graduation on December 7 when he was named dux of his class. Photo: Supplied.

A former Canberra man who stripped down to his undies to single-handedly rescue a woman in a flooded river has had his life-saving actions recognised with a national bravery medal.

The son of local couple Richard and Debbie Rolfe was called out to the Hugh River, in December 2016, during widespread flooding in the area.

Constable Rolfe and Acting Sergeant Kirstina Jamieson and a member of the public, Michael Priestly, rescued a Tawainese man clinging on to a tree in the middle of the fast-flowing river.

The man had escaped from a hired car that had been washed off the river crossing west of Alice Springs. His female travelling partner who had been in the car was still somewhere in the river.

With no life jackets and with just a rope, the trio made their way across the river to a land bank near the stranded man, throwing him a rope to tie around himself.

Constable Rolfe swam across the very fast flowing Hugh River and went searching for the second tourist on land and by wading through the rising water, on the edge of the river.

It was only the former army officer’s first week working for the NT Police. 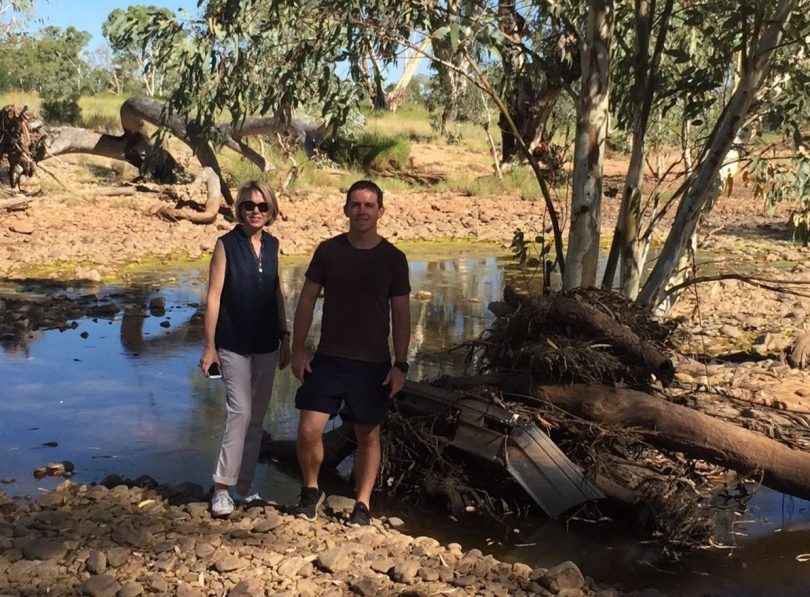 Zach Rolfe and his mum Debbie Rolfe at the tree where the he saved the Tawainese man eight weeks earlier. Photo: Supplied.

The former Canberra Grammar student travelled five kilometres before he located the missing woman in the middle of a fork in the river.

Constable Rolfe made his way to the distressed woman, swimming from tree to tree, and carried her on his back across the fast flowing river to the opposite river bank, before helping her walk the five kilometres back to the crossing and to the help of emergency services.

“I thought no one would ever find me and I was going to die. I had been walking and swimming for maybe an hour and then I heard someone calling out my name,” Ms Lam said.

“It was the policeman, the one who came and saved me. I did not know then he was a policeman, he wasn’t wearing a uniform. He did not have any clothes on at all. I just saw a man right across the other side of the river. He was yelling out my name to me. I screamed out to him for help.”

If it wasn’t for the daring act of the former Canberra man, Ms Lam might never have been found.

“I don’t know what would have happened to me if he had left me on the side of the river I was on and went back to get help. I know I would not have been able to make it back to the cars on my own,” she said.

Both police officers were awarded a national police bravery medal for their actions last month.

A woman has died after being pulled from the water at a beach on the state’s south coast yesterday. Just...
Property 13