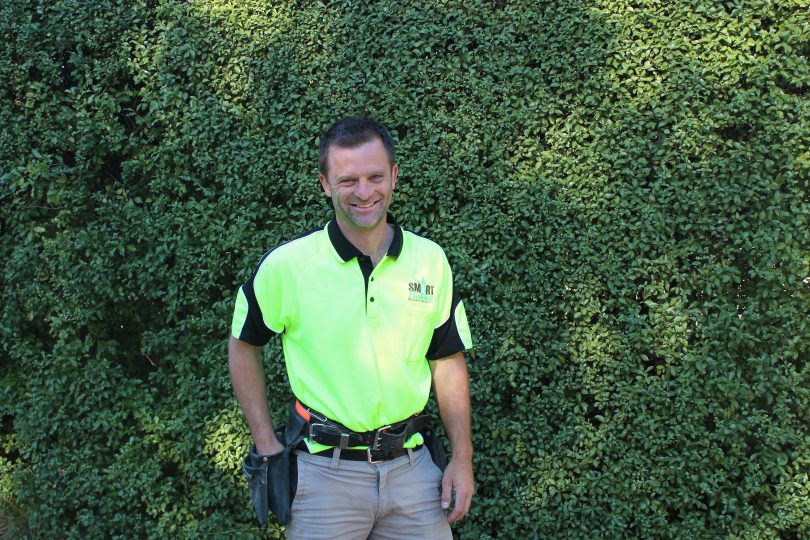 Simon Russell is building a different future for himself and his family. Photo: Supplied.

A former public servant has turned back the clock in mid-life to gamble on his first love and chisel out a new career, collecting a national apprentice of the year award in the process.

Three years ago, 41-year-old family man Simon Russell of Macquarie swapped environmental policy at the Murray Darling Basin Authority for building sites, retrieving his aspirations as a 17-year-old to be a carpenter.

It’s a bet that has paid huge dividends with Mr Russell winning the prestigious HIA Jim Brookes Australian Apprentice of the Year award, presented to him in Singapore in May.

Unable to find a host on leaving school in Shepparton, he followed his parents’ advice to try university instead, gaining a degree in Environmental Policy at the Royal Melbourne Institute of Technology (RMIT).

But the hankering for the tools never really left him and the father of three found himself questioning his future at the MDBA.

“As a family, we decided to stay in Canberra, it’s the perfect place to raise kids. So I said to myself, ‘I better make some changes before it’s too late,” Mr Russell said.

Nevertheless, it took a couple of years before he made the break with the full backing of his public servant wife.

“She’s been a massive support, she said go for it. Financially it was a backward step but one we were prepared to take for happiness and doing what you want,” Mr Russell said.

He found a host, The Smart Housing Building Group in Fyshwick, and approached the Housing Industry Association, a registered training organisation, to oversee his apprenticeship.

Mr Russell was nominated for the award by his host for displaying great communication on-site and taking pride in his work, and always completing jobs to a high standard.

But it wasn’t a seamless transition from the public service desk to the worksite. “It was a massive shock. I didn’t even know what to wear. I didn’t have a clue,” he said of his first day.

Mr Russell said although he was thrown into the work, it took him about 18 months for things to really click, not to mention getting used to those early winter starts.

By his third year, everything started coming together, and the lessons from his foreman and now employer Owen Scott on attention to detail, discipline and learning from his mistakes were sinking in.

Mr Russell recalls the first time Mr Scott gave him the responsibility to build a deck. “I think that’s where trust and confidence started,” he said.

The highlights of his final year included successfully building a Japanese-style outdoor area and granny flat.

Now out of his time, Mr Russell is still with Smart Housing but is working towards his builder’s licence so in a couple of years, he can start his own business doing what he loves – building people’s dreams.

“I really love being able to transform a house for someone. To see the client go through this process where there’s dust and dirt everywhere and it comes up to what they’ve envisaged, I think that’s why I love being a builder,” he said.

Employing his own apprentices is definitely part of his business plan. “That’s what you’ve got to do in this industry, and I think you get a lot out of seeing young people coming through the system,” he said.

And the not so young too. Mr Russell would encourage anyone to do what he has done “if that’s what you’re into, your passion.”

“I know people who say I wish I could have done that. Well, you can but there’s obviously sacrifices you’ve got to make,” he said.

And those 6 am winter wake-ups are just part of the routine now.

Valerie Foster - 6 hours ago
Not everything new is good. View
News 134

Brianna - 8 hours ago
Spiral, they selfishly put their customs, wants and needs ahead of everyone else. It looks like some of these people might be... View
rationalobserver - 20 hours ago
The Government (PM&C - statistical value of a life) has a number for that. Once the combined costs (economic, social and envi... View
rationalobserver - 20 hours ago
Actually, the data shows that the only domestic violence related increase we have seen was the noise from DV advocacy groups... View
Public Sector 16

Robyn Holder - 9 hours ago
When men stop wearing their ridiculous old fashioned suits and ties because they have no imagination the they can discuss it.... View
Angela Hunter - 21 hours ago
Could someone please tell the dept of Home Affairs that it's almost almost 2022. Next they'll be bringing back tea ladies and... View
Community 15

HiddenDragon - 11 hours ago
On the day it was announced, the jump in the ACT unemployment rate was being spun in the local media (presumably at the promp... View
News 22

brianf - 14 hours ago
All politicians, their staff and lobbyists should have been required to get tested and isolate for a fortnight before travell... View
Food & Wine 12

Jude Lou - 20 hours ago
Are there at least 10 layers? Wowww View
show more show less
*Results are based on activity within last 7 days

A severe weather warning has been issued for south-east NSW and southern parts of the ACT for damaging winds averaging...
News 0

NASA will build a new cutting-edge deep-space antenna at Tidbinbilla as a rising number of missions puts increasing pressure on...
News 81

@The_RiotACT @The_RiotACT
Punk rock, high energy jams and Sunday sessions - there's something for everyone this week. As usual - check with venues before you head out https://t.co/Fyusza28xQ #gigguide (6 hours ago)

@The_RiotACT @The_RiotACT
The @NatGalleryAus has recently revamped its Art Cases touring exhibition with new themes and new objects. Find out how you can bring this hands-own experience in contemporary art to your school or community.https://t.co/ksjuEaNhYv (7 hours ago)

@The_RiotACT @The_RiotACT
Cup and Coaster in Fyshwick feels like coming home - and with an exciting menu that changes every two months, there are plenty of reasons to become a regular, as Michelle Taylor discovered https://t.co/97JbTzoSm2 (9 hours ago)