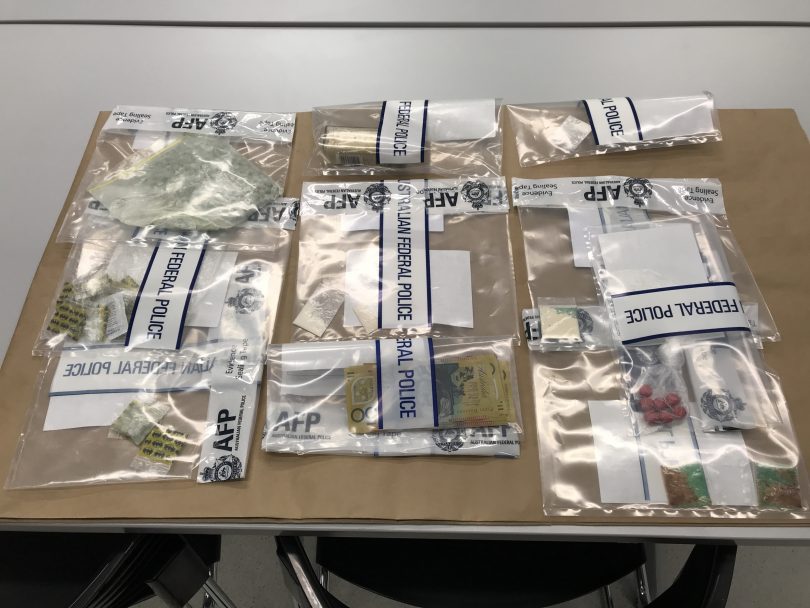 The drugs and cash seized by officers during the four search warrants. Photo: Supplied by ACT Policing.

Three men and one woman will face the ACT Magistrates Court this morning (2 August) with a total of 21 drug trafficking charges after a recent police operation targetting drug dealers outside Civic nightclubs.

Between May and July this year, ACT Policing undertook a targetted surveillance on ACT nightclubs as part of Operation Ghar and identified people who were selling illicit drugs.

On Wednesday (1 August), officers seized a trafficable quantity of cocaine, more than 1,000 MDMA pills and around $5,000 in cash in four raids in Macgregor, Cook, Macquarie and Queanbeyan.

ACT Policing also arrested a 39-year-old Mackellar man, a 32-year-old Cook man, a 46-year-old Macquarie man and a 20-year-old Queanbeyan woman who will face a combined total of 21 charges of trafficking a controlled drug.

Detective Station Sergeant Harry Hains said these are serious offences and can carry up to 25 years imprisonment.

“The concerning thing for me is the prevalence of drug dealing in the nightclub district,” Detective Sergeant Hains said.

“People need to realise that if they are involved in the sale or purchase of drugs, they are actually supporting international, vicious criminal cartels that are actively engaged in murder. They are the end users of this business model.”

Detective Sergeant Hains said the four dealers had loose links to drug syndicates in the territory, but their level in any syndicate was currently unknown as the investigation remains ongoing.

“ACT Policing will continue to conduct operations such as these. If you are involved in drug supply you never really know who is watching,” he said.

“Operation Ghar remains ongoing and we will continue to target drug dealers to disrupt the supply of drugs in our community.”

If you have information about the trafficking or supply of illicit drugs please contact Crime Stoppers on 1800 333 000 or via the ACT Crime Stoppers website.