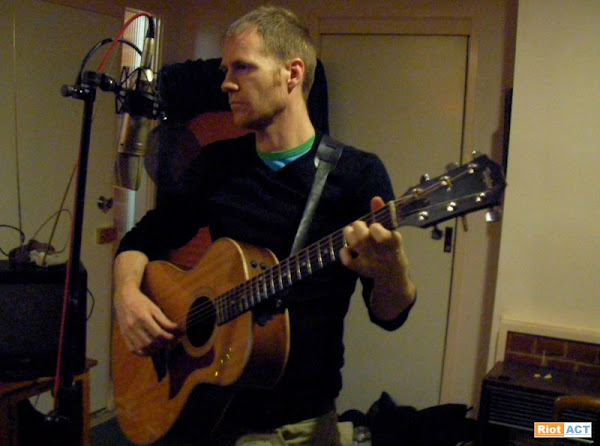 In very exciting news Canberra’s own Fred Smith is listed as the next feature on the ABC’s Australian Story:

Fred Smith has been described as ‘Australia’s secret weapon’ in international diplomacy.

As a career diplomat, he’s represented Australia in Bougainville and more recently in Afghanistan.

But it’s his second career as a musician that came to the fore in Uruzgan province, when he wrote a song about the death of Australian soldier Ben Ranaudo.

“Dust in Uruzgan” captured the hearts of many serving in Afghanistan and a second song, “Sapper’s Lullaby” has become an anthem for soldiers and their families.

Now, with Australian forces about to depart Afghanistan, this is the story of a diplomat with a difference.

The song is Dust OF Uruzgan and back in 2009 we interviewed Fred with a focus on his music, pre Afghanistan.

It’s actually Ian, Fred was his high school nickname which, obviously stuck. Its also, coincidentally, a great nickname for a ‘common people’ folk singer. The ADF love him, because he respects and empathises with the soldier, even while perhaps opposing the war (unlike, say, the anti Vietnam protests).

I’ve seen Fred many times at the NFF, both by himself and with the Spooky Men.

He strikes me as a man of immense talent, wit and compassion. He really is a funny, funny bastard.

His performance of “Say a Prayer” with the Spookies was one of the most moving musical experiences of my life and I’d put him in the “Living National treasure” class.

Well he’s from the Public Service aristocracy. His father is Ric Smith, former Ambassador to China and Secretary of Defence.

I had to buy a copy of Soapbox recently because my Dad didn’t want to part with his when I moved out. It’s such a good album.

Just a brilliant performer & one of Australians best musicians & songwriters. I think I have every one of his albums.

David Ironside - 40 minutes ago
Tracey Ironside yes there a few around Fadden recently View
Sandy Gibbs - 46 minutes ago
Kathy Little Suzy Obsivac these are the ones we saw on our walk today. Timely article!... View
Joanne Boyanton - 60 minutes ago
Had some in our back yard View
Property 39

Margaret Welsh - 1 hour ago
Yes, and I'm not a Liberal voter these days. I hate the number of apartments. When we downsize we'll be moving out of the ACT... View
watto23 - 4 hours ago
So why can't the liberals provide a solution to this problem. They are very good at pointing out everything Labor does wrong,... View
Opinion 1

facebook_user - 3 hours ago
Excellent article Hon Deepak-Raj Gupta. You are spot on regarding the Pandemic COVID19 and themself reliance required by Canb... View
Opinion 1

Acton - 4 hours ago
$100,000 on a rebranding exercise, paid to some contractor, once again demonstrates the waste and extravgence of the ACT gove... View
Community 33

Jeremy Calero - 5 hours ago
Kaitlyn nothing will stop it lol View
O L - 6 hours ago
Wonder what that means for rental longer term? Probably go up after covid to match increase in housing values View
Rodney Weber - 10 hours ago
Shiva Sapkota A lot of the older areas also have many poor quality houses. Cheap materials :-( View
Community 12

O L - 6 hours ago
Great, that means little to no federal funding coming our way View
Annie Mills - 7 hours ago
Ben Winkler I have a sneaking suspicion that people in the bushfire affected areas are so desperate for the help they have be... View
Craig Griffiths - 8 hours ago
I've become convinced over the years that tabloid media have a psychological code in the messages they put out during electio... View
Property 10

@The_RiotACT @The_RiotACT
Yerrabi MLA Deepak-Raj Gupta says COVID-19 can teach us all to be more self-reliant and to have a stronger focus on our local community and businesses https://t.co/qoDy90jHd7 (4 hours ago)