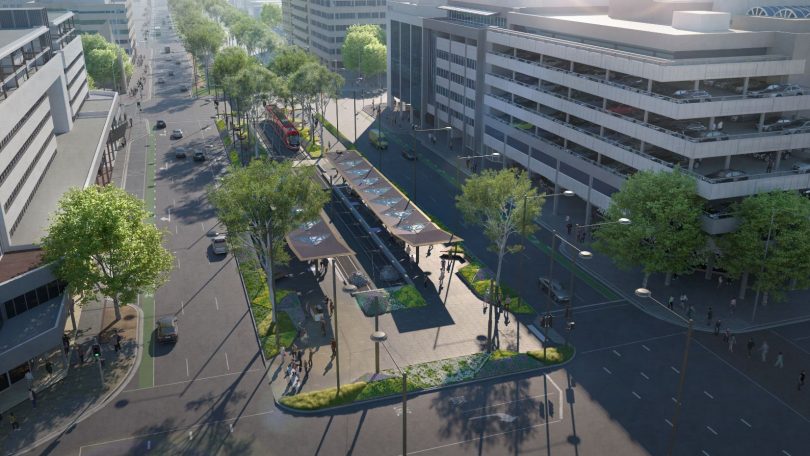 An artist’s impression of the Alinga Street light rail stop. Light rail is a major driver of change and urban renewal in the ACT and one of the major factors in any update of the ACT Planning Strategy. Source: ACT Government.

The ACT Government will kick off a new public consultation to update Canberra’s planning strategy with a series of free public seminars led by experts in their fields in a bid to capture the ‘missing voices’ in the planning debate.

The ACT Planning Strategy Refresh will update the current 2012 document, incorporating work done since on climate change, housing and transport, as well as new feedback from the community.

Director-General of the Environment, Planning and Sustainable Development Directorate Ben Ponton said the seminars would set the scene for other engagement activities over the next three months including Planning in the Pub sessions, more structured workshops, the Your Say website information portal, and youth engagement and stakeholder meetings involving the groups such as the Youth Advisory Council, Council of the Ageing and community councils.

He said the Refresh would lay the foundations for an ambitious planning agenda next year, including a review of the Territory Plan.

“It’s a genuine exercise in capturing as many interested voices as we possibly can so anyone who has an interest can have their say in the long-term planning of the city,” he said.

“If we can work with the community and understand what their vision is and settle the planning strategy for the high-level strategic direction by the end of the year that would then allow us to continue the conversation with the community on how that is implemented through the Territory Plan.”

Mr Ponton said the Government wanted to open the consultation in an informal way that introduced the key themes of transport, climate change and planning in an accessible way.

Part of that will be live-streaming of the seminars, including an interactive Q&A, through the Your Say website, which will also host the seminars for later viewing at one’s leisure.

The first of three seminars will take place on 28 June with the topic, How do we plan for Canberra’s net zero emissions transport system? Futurist Peter Ellyard, tech guru from CSIRO’s Data 61 Neil Temperley and Dr Alexa Delbosc from Monash University will talk about planning measures, behavioural change and future transport technologies. Urban futurist and former Lord Mayor of Adelaide Stephen Yarwood will also feature during the series.

Mr Ponton said the idea was to hear from experts in their fields who had experience outside of Canberra and were not Government representatives.

He said the Refresh would also test whether themes raised in previous consultations involving planning were still current.

Minister for Planning and Land Management Mick Gentleman said the Planning Strategy Refresh hoped to open a conversation with the community about how planning would work for Canberra over the coming years.

“A refreshed 2018 ACT Planning Strategy document will carry forward the major policies established in 2012, but also incorporate the progress being made towards key Government priorities like achieving net zero greenhouse gas emissions in the ACT by 2045, providing increased housing choice and affordability and delivering improved public transport and light rail,” Mr Gentleman said.

An updated strategy was needed that took into account recent changes in the ACT such as light rail, climate sustainability policies and ongoing urban renewal.

The Minister said the Planning Strategy would reference the concurrent reviews under way into transport and climate change, to ensure the Government’s approach was aligned and complementary.

“In recent years the Government has done several engagements and consultations with the ACT community, including about Housing Choices, the new Housing Strategy, the city’s Statement of Planning Intent and major projects like City and Gateway. All of these encompass discussion on the future vision of Canberra,” Mr Gentleman said.

“The community has provided valuable input to these and many other engagement conversations and we acknowledge this contribution in helping shape Canberra over the next few decades. Continuing the conversation with the Planning Strategy Refresh will bring this input together.

“We want to embark on an engagement that checks in with the community and sees that we are getting things right in moving forward with Government policy.”

For more information go to www.yoursay.act.gov.au/act-planning-strategy-refresh

To book a seat for the 28 June seminar go here.

Asha Kidd - 34 minutes ago
Is there a go fund me for these guys? View
Adam Jovanovic - 23 hours ago
You'd be surprised how many people vote for the government that screws them over the most. Mainly.because.of alarmist.and exa... View
Lifestyle 14