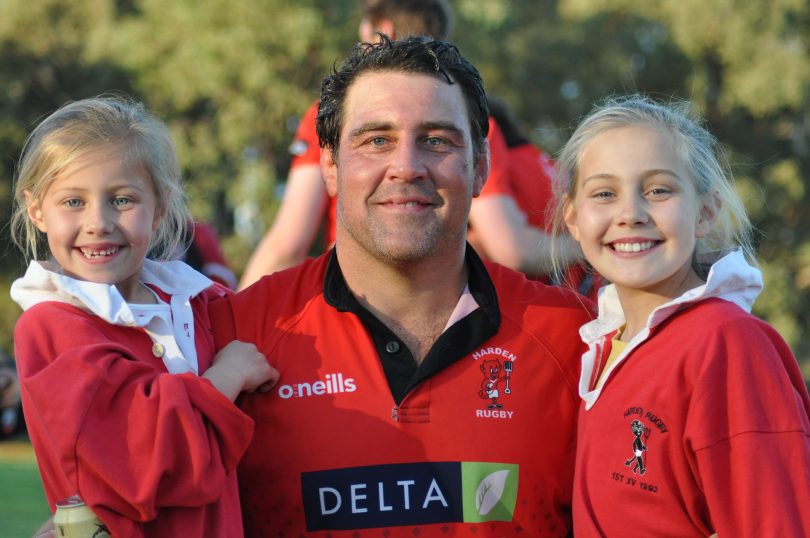 They say it’s the game they play in heaven, and on Saturday, 12 September, it must have felt that way for Josh Mann-Rea.

The former Waratahs, Brumbies and Wallabies player won his first ever rugby union grand final at 39 years of age, playing for the Harden Red Devils.

Mann-Rea first pulled on the boots as a 13-year-old. Just six years later he was playing under-19s for Australia, and two years after that, under-21s for his country. He made finals in both of those age brackets but was on the wrong end of the scoreline in both of them.

Later in his professional career, he played in Super Rugby semifinals and quarterfinals with the Brumbies, but never got to the big dance.

Harden-Murrumburrah has been hit by drought and COVID-19, mandating a shortened 2020 rugby calendar and a long list of COVID-19 regulations for the competition to go ahead.

Mann-Rea now works at Oxton Park, an 8000 hectare farm between the twin towns of Harden-Murrumburrah and Young.

“I’m really enjoying my time at Oxton Park,” he says. “I work on the stock side and the cropping side, just depending on where I am needed. I also do fencing. I’m happy to do whatever needs to be done. You are always busy, which is good.”

In April 2019, while playing for the Brumbies in Cape Town, Mann-Rea ruptured his anterior cruciate ligament during the match and knew almost immediately it was likely to be his last professional game. He refused to be stretchered off the field, saying it wasn’t his style.

In June last year, while in the early stages of recovery, he was hopeful of playing a few games for Harden Red Devils. He entered professional retirement and set about rehabilitating his knee with the assistance of the Brumbies. 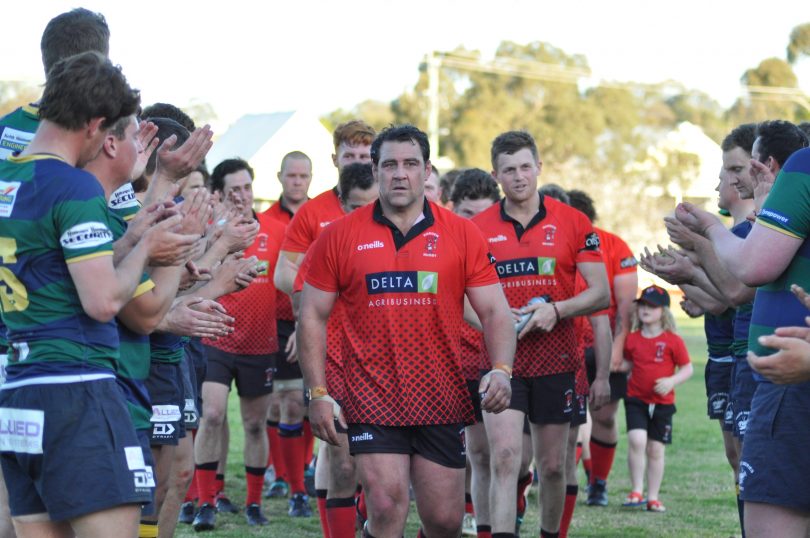 Josh Mann-Rea leads the Harden Red Devils from the field after their 27-13 grand final victory against Young Yabbies on 12 September. Photo: Matt Stadtmiller.

Thirty nine years is a long time to wait for a premiership and for Mann-Rea it produced both exhilaration and relief. He lined up in the front row and played both hooker and prop in the decisive four-tries-to-one Red Devils victory against the Yabbies.

His class on the field was evident in his work carrying the ball, cleaning out the ruck and tackling the opposition. However, it was his skill set in scrums and his accuracy with the ball when throwing line-outs for the Red Devils that shone through, delivering a glut of possession to Harden.

Red Devils coach Jack O’Connor works on his family’s property at Oxton Park, alongside Mann-Rea. He was glowing about the former Brumbies player’s effort in helping to lead a squad whose ages spread across a generation, from 19 to 40.

“I’m fortunate enough to work with Josh from Monday to Friday at Oxton Park,” says Jack. “He is hands down the hardest working guy I have ever met, in work and footy. His work ethic on the field is a reflection of his personality and I have never come across such a special bloke who works so hard and is so thoughtful of everyone else.

“His involvement with this club, it is unimaginable the effect he has had. His leadership style is different to others. He works so closely with the younger players and he loves mentoring them. They wouldn’t be the players they were this year without Josh. He has really taken them under his wing. He does it so casually.”

It wasn’t an easy road back to the football paddock for Mann-Rea. He worked hard on his rehab and debuted for Harden off the bench against West Wyalong in a 44- 3 victory just over a month ago.

“He’s done a lot of rehab,” says Jack. “He wasn’t playing for the first half of the season. He wanted to play and everyone in Harden is glad he did. When he hits a bloke, they get hit back to the 1950s.”

Mann-Rea is just happy he was able to return to the field and finally get his hands on some silverware.

“I’m just rapt,” he says. “Some fellas go through their whole career and don’t get to a grand final so to win one, yeah, it’s pretty special. I’m ecstatic.

“All year I have just been watching the boys develop as players. Some of the younger fellas in the team, they just gel now. The last few games we have played some pretty good footy – forwards as well as backs across the park.

“I want to thank Harden Rugby Club and the boys and the support staff down there. It’s all the stuff that goes on behind the scenes and the volunteers. Without them you don’t have a comp, a club or a team.”