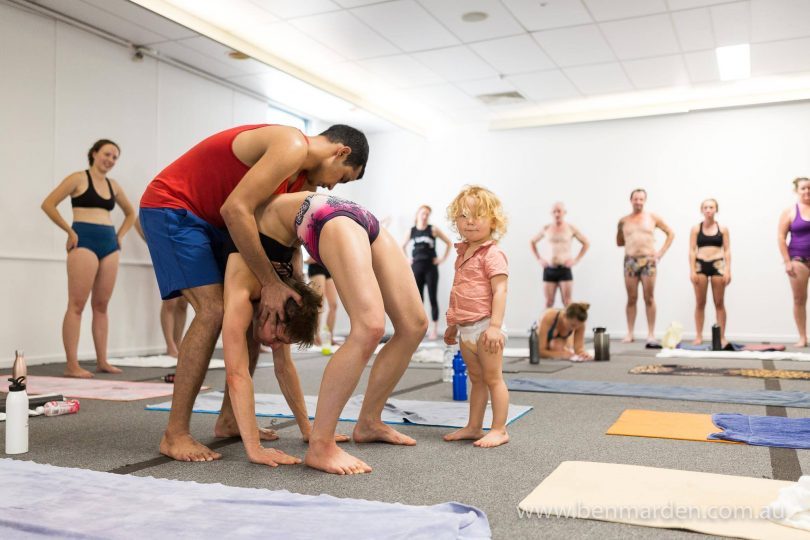 Six years ago, they were told it was “economic suicide” to open a Bikram Yoga studio in the small town of Cobargo but world-renowned yoga teacher Amrei Marden and her husband Ben not only continue to run the studio but have also been part of the revival of The National Yoga Sport Championships, held in Canberra on 11th August.

“A lot of people do comment that a yoga competition sounds counter-intuitive and that was my first thought as well,” Amrei laughs, “but it’s really about the postures and competing against where you were last year.”

The national competition had not been held since 2014 in Australia until this month’s event but with 40 participants, is already bigger than Canada’s competition, which only had eight competitors this year.

The Australian competitors were mostly from the Bikram discipline, a type of yoga created by Bikram Choudhury, which consists of 26 poses practised in a room heated to between 35-40 degrees, which is why it’s sometimes referred to as “hot yoga.” 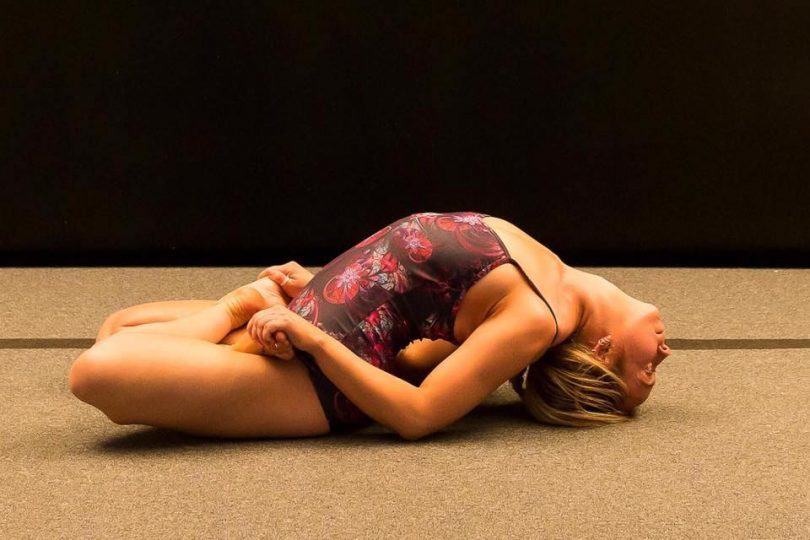 Ben competed this year and says that it is an “amazing process” and that for him, it has not been about winning.

The tradition of yoga competitions is thousands of years old in its native India and Amrei has seen her fair share, as a competitor and as judge of the World Championships for ten consecutive years.

“I might need to say a few things about Amrei because she is so humble,” Ben jokes of his wife. “We have teachers come from all over the world to be mentored by her, because of the quality of her teaching and her knowledge.”

Canberra yoga studio teacher Tracey Deng is one of her many fans and reports that working with Amrei fixed her knee pain in just a few days.

“Amrei understands the postures and the body mechanics really well and her strong attention to detail allows her to make precise corrections for each individual, a unique talent,” Tracey writes. 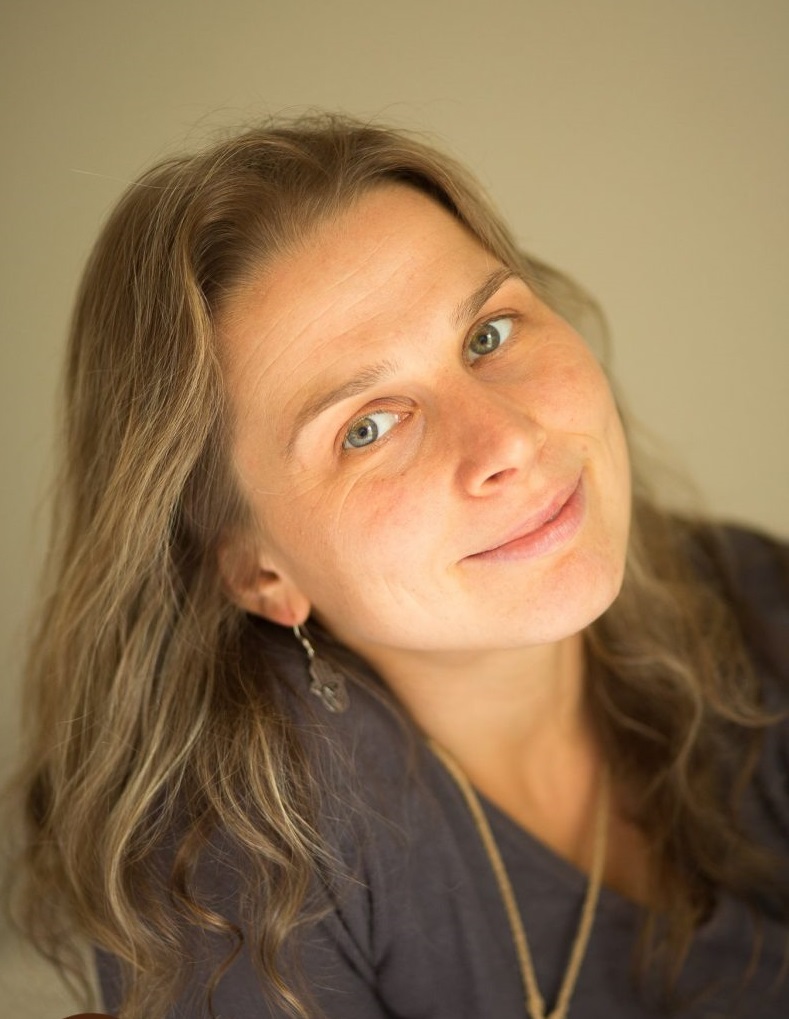 Amrei, a native of Germany, has 20 years experience as a Bikram yoga teacher and before she met Ben and moved to Cobargo, she was running two yoga studios in Melbourne.

Ben was one of Amrei’s students and says that Bikram yoga has been a lifesaver for him.

“My body needed it so badly, my hamstrings were unbelievably tight from sitting all day and driving, I was starting to get some arthritis and I was taking anti-depressants,” Ben says. “Now I do two classes a week and my body doesn’t hurt and I’m not on any medication.”

Although Bikram yoga is known for its scantily-clad students, Ben and Amrei say that their studio is not a place for posturing and that everyone is welcome.

“A few of our classes are made up entirely of tradies,” Ben says. “A lot of them are over 40 and have realized that doing yoga is the only way they can keep doing their jobs without being in massive pain.” 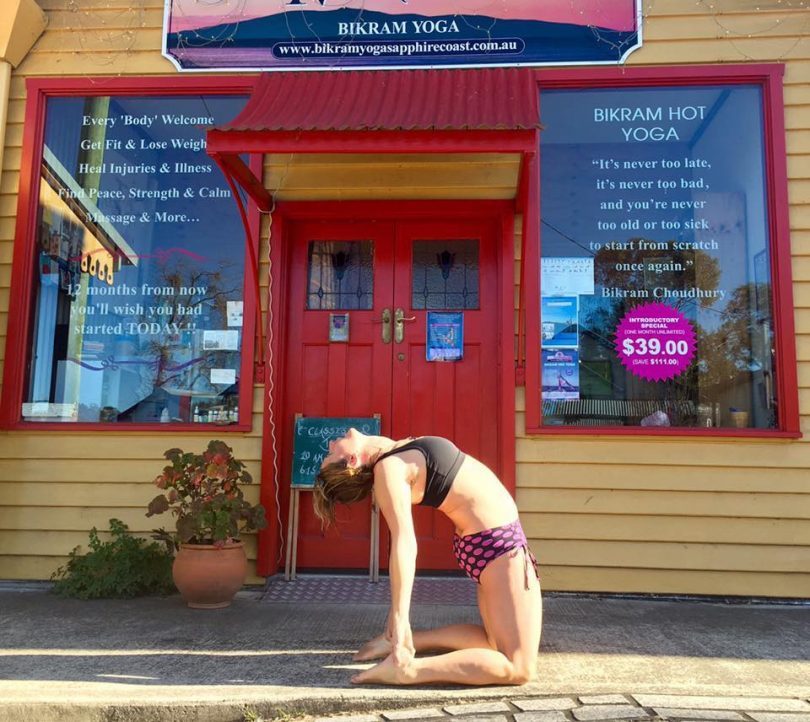 Ben and Amrei admit that people’s feelings about Bikram yoga are mixed.

“Most people don’t like doing it while it’s happening,” Ambrei says with a laugh, “but they come back because they feel so good afterwards.”

Ben says he still has to psych himself up for his two weekly classes.

“Look, the first time you do it, you’re upside down with sweat running into your ears and you’re wondering what the hell you’re doing,” he recounts. “But I always feel better afterwards, always.”

Amrei says in her experience, it doesn’t matter how broken someone is, as long as they accept where they are and want to change it.

“One of the most inspiring people I have met and taught was a woman who had not exercised in 20 years and for the first class, she could do almost nothing but she kept coming back and after a few months, everything came together. It takes a certain level of humility to lie down and take it easy and that’s what you need to do sometimes, especially when you first start.”

“It’s never too bad and never too late, you’re never too old or sick to start from scratch once again”- Bikram.

Bikram Yoga Sapphire Coast in Cobargo has classes 7 days a week every day of the year except Christmas and New Years Day and runs regular yoga retreats.