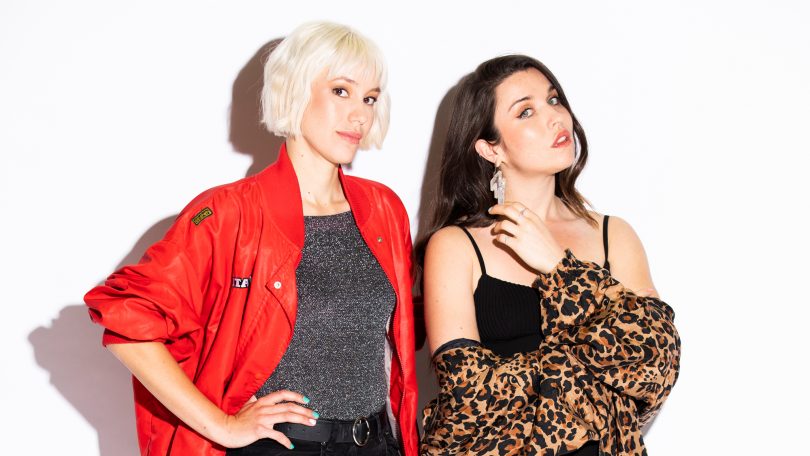 They are perhaps more infamous than famous for calling Queanbeyan a “wannabe” in their rap Is it a Quanger?, but now former Canberra residents Sally Coleman and Erica Mallett will front triple j radio’s coveted morning show when they take over from Ben and Liam who finish up on 1 November.

Sally and Erica will start at the beginning of next year.

The radio duo grew up in Canberra’s south, where they were a year apart at Deakin High School and lived around the corner from each other for about 20 years without meeting.

Coleman lived in Garran and Mallett in Hughes, but it was a holiday to India with mutual friends in 2012 that first brought them together.

They told Region Media that they owe a lot to the Canberra hip hop scene.

“We got our musical start in Canberra,” they said. “We clicked pretty quickly and realised how much we had in common.

“There were some early players who really backed us and gave us support slots and a chance to get on stage. Venues like Transit Bar and La De Da Bar were really important for us learning how to perform.

“When we moved to Sydney, we were trying to get our music out there and dropped a CD of our first EP into Sydney community station, FBi Radio. A couple of months later, we got an email from them saying ‘hey, our hip hop show hosts are leaving – any chance you’d ever consider doing radio?’ We’d never done radio before, or even considered it, but we said ‘Sure! Let’s give it a go!'”

As artists, Sally and Erica formed a hip hop duo called Coda Conduct. They performed at the Groovin the Moo, Spilt Milk and Listen Out festivals.

Their rap Is It A Quanger? was broadcast on triple j in 2015:

Queanbeyan! What a wannabe! Copied our forecast, got it free. But it’s not a shock, cos you’re basically … just part of the ACT

Canberra, we get a light rail and we a damn sight better with a Skywhale. But meanwhile, when we had it, Queanbeyan went and got a giant snail.

After getting their start at FBi Radio’s hip hop show in 2015, Sally and Erica soon found themselves delivering a weekly hip hop segment on triple j Breakfast.

They soon became regular voices on triple j, filling in on Breakfast, Drive, Good Nights, The Hip Hop Show, House Party and Summer Arvos. Last year, they took over Weekend Arvos, where they brought priceless talk-back on topics such as ‘Do you wash below your knee?’, which people still routinely fight them on.

Sally and Erica are described as having an authenticity that fosters a unique relationship with listeners, allowing them to draw out hilarious stories, as well as work through challenging issues with young people.

They said that working weekends on triple j has made it hard to visit friends and family in Canberra.

“Both our families still live in Canberra and we try to head back as much as we can to visit them. Now that we’ll have weekends free from next year, hopefully, we’ll be catching more of those Murray’s buses to the ACT!

They both grew up with triple j and have many great memories of singalongs in the car, Hottest 100 backyard parties and moshpit moments.

“We’re constantly blown away by how funny, smart and compassionate triple j listeners are,” says Coleman. “They never cease to entertain and amaze us and we can’t wait to spend our mornings with a couple of million music-obsessed mates.”

They said they are looking forward to being part of the next chapter at triple j.

“We love playing with a whole spectrum of emotion on the radio. One minute it can be hilarious and surprising, and the next minute you’re tearing up at your steering wheel.

“Sometimes it doesn’t go the way you expect it to, and that can be really exciting. At the bottom of it all, we are just big music nerds who love talking about music and talking to musicians. We can’t wait to geek out on that.”