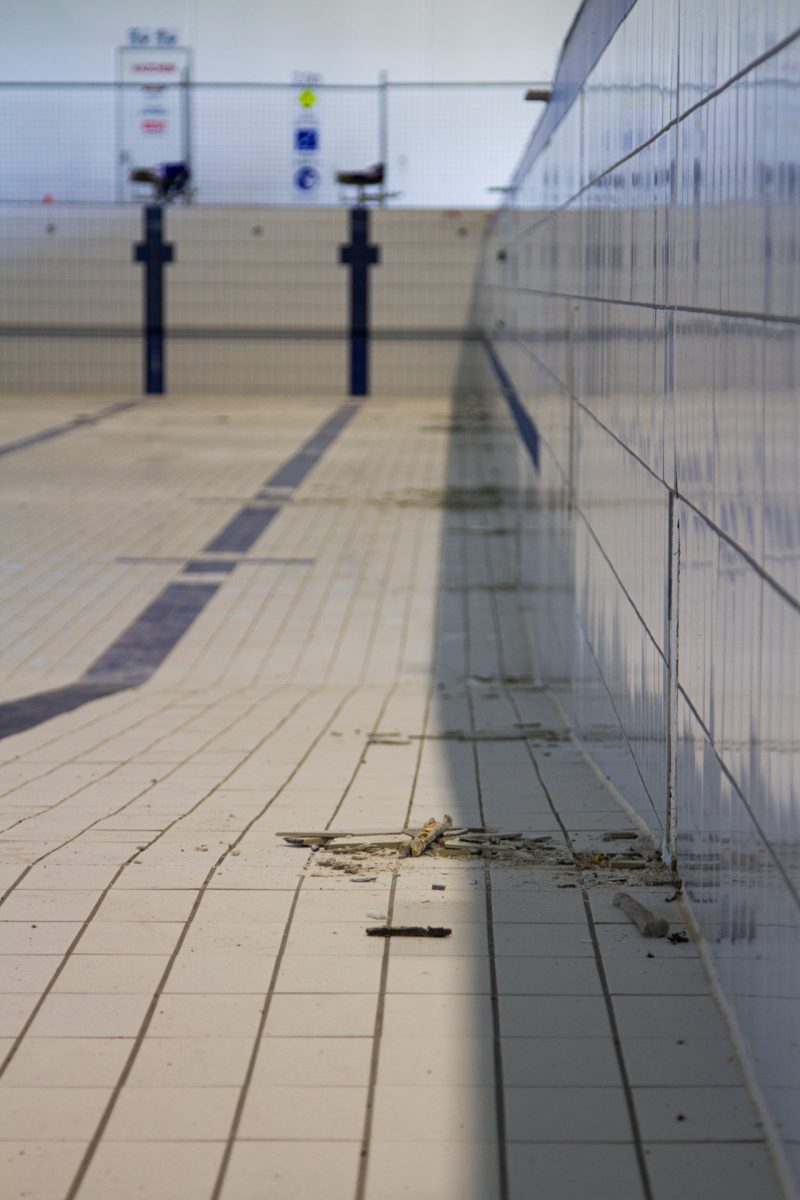 The Gungahlin pool at the Leisure Centre will be closed until at least 2022 for repair works. Photo: Dominic Giannini.

The ACT Government has allocated a further $300,000 for repairs at the Gungahlin Pool after construction delays due to Sydney’s extended lockdown pushed the pool’s completion date into 2022.

The new $1,103,300 contract to replace the pool’s tiling and membrane has been awarded to Metz Project Services. The company’s headquarters are in Sydney.

A government spokesperson said the additional funding “will allow Metz to install the comprehensive tiling system … recommended by experts to provide the best possible chance to reduce the risk of further pool repairs in the future”.

“The additional costs are due to market pressures such as increasing costs of materials, the complex requirements for the various trades packages needed to complete the work and the availability of suitable tenderers for the specialised work required.”

This brings the pool’s total repair cost to $1.75 million so far, greatly exceeding the $400,000 settlement between the ACT Government and the pool’s original builder.

An updated timeline for the pool still has not been released.

The Canberra Liberals criticised the delays last week saying the pool’s completion would not have been pushed back had the government used local Canberra workers for the repairs.

Yerrabi Liberal MLA Leanne Castley accused the government of turning its back on the Gungahlin community.

The contract was listed as a single select, with the government saying Metz was the only suitable supplier for the build*.

“The tiling system being used for the 50-metre pool is not just a simple tiling project,” the spokesperson said.

“A specialist commercial aquatic contractor is required to install the comprehensive tiling system which includes several stages and requires specific qualifications to complete the work.”

*Correction: The original article said the contract’s procurement methodology was not an open tender. It was single select.

In over their depth?

The ACT Gov awarded a contract to a company to built a swimming pool. The pool provided is not up to standard. In fact, its shite.
Why are we, Canberra ratepayers, now required to pay for the remediation?
The builder should have insurance to cover this disaster.
Time for a bit more clarity.

The problem is simple. Builder says not their fault (mostly due to pool being empty for so long), so to get them or the insurer to pay to fix it they would need to be taken to court which would take years to resolve. And whilst in litigation the pool couldn’t be fixed.

So government took a payment from builder and paying the rest as the easiest and fastest path to getting it fixed.

The original contract builder knew the cost of the fix, and did an easy exit deal with our act government (that we deserve) and so now it’s us muppets that pick up the tab.

Best place to be a shonky builder is right here in Canberra. Can’t go wrong with Labour at the wheel.

The alternative would have been years of litigation. No win for anyone and doubt the Libs would have done any better.

JC,
The alternative could have been better governance, project management and procurement.

But I know how ridiculously far fetched that possibility sounds. The Liberals being woeful also doesn’t excuse the ALP for incompetence.

No matter how you try to spin it, this is a clear failure of the ACT government that has cost taxpayers money.

What nonsense. Can you seriously advise us all on what governance or lack thereof lead to this?

The choosen builder was not some hack who never built a pool before, they have done plenty that don’t have the same issue. And it is believe the real issue was the removal of the water for an extended period of time. Something a pool normally wouldn’t be designed for. You do understand the physics behind sticking a pool in the ground don’t you?

Oh and didn’t say the Liberals were woeful in this case. I said they wouldn’t have done any better as there really isn’t any extra that could have been done in the terms of governance or oversight to avoid this.

JC,
We’ve been over this. First you claimed the government’s silence on the issue was because of pending legal action.
Then when the minister said that legal action was unlikely to be successful and the government absolved the contractor of further liability for a piddly “go away” payment, you claimed this was expected. No matter the issue, you keep concocting excuses for this government’s poor performance. I’m surprised you don’t look like a pretzel at this stage.

The fact that the problem exists and that the the taxpayer is footing the bill by definition means there was governance and procurement issues with the way that project risks were managed. Unless you’re saying the government purposely and knowingly took on those risks which would not match with their own public statements on the issue.

They are in charge of the regulatory framework and certification.

They are in charge of hundreds of millions of dollar of capital works yearly and exert significant market power in procurement and contractual activities.

The idea that this sort of situation was unforeseeable or uncontrollable by the government is laughable. They literally have dozens of people whose job it is to manage it.

And trying to blame the problem on the pool being empty. LOL. Why was it empty in the first place? Everything flows (ha) from those mistakes.

Mistakes that occurred in areas that the government is supposed to have control of. So either they are ignorant or incompetent. Neither is a good look.

Think we have been over this before.

Firstly my claim of legal action was 100% right. The government was in a legal stoush with the builder which is why repairs were not happening and they agreed we through legal means to settle rather than let it go to court for even more years.

As to why the pool was empty they emptied when Covid closed the pool. Take a massive weight out of a pool what ya reckon is going to happen.

And frankly other than choosing a reputable builder there is not much else you can do in terms over governance.

You clearly have little idea what governments do and are meant to do, but seem to always think someone especially a Labor politician is the root cause.

JC ,
Firstly, you can’t spin your claims around legal action, you even suggested that the only reason that the government had allocated money in the budget was to fix the problem first then claim it back off the builder through the courts. It was clearly wrong and the Minister’s own statements that legal action was unlikely to be successful, proves it further.

“And frankly other than choosing a reputable builder there is not much else you can do in terms over governance.”

This just shows either you don’t know much about project governance, risk management and procurement or you’re being deliberately disingenuous.

Firstly, the government writes the rule book, so if you’re suggesting there is nothing poor clients can do about shoddy building work, then it is the government’s own regulations that have caused the problem. But in reality, that’s not true, the regulations do have significant controls in place.

The government also have reams of procurement policies, processes and employees designed to control the very risks of shoddy work that happened here.

You can’t say that identifying and controlling the exact problems that occurred were not possible. They wrote and agreed to the contract terms, which covers this area. So either they didn’t identify the risks or they didn’t control them. In both cases, it’s their own fault.

They agreed to the hold points, the inspection regimes, the certification, the defects liability periods, the potential bonds etc.

This isn’t a single person building a house, it’s a government with a $5B+ yearly budget.

And thanks for reminding me to get over to the other thread on Condamine Court to change my position from supporting the government’s changes to public housing there. Because I forgot that I hate the ALP apparently.

Over time, over budget, it’s the ACT way.