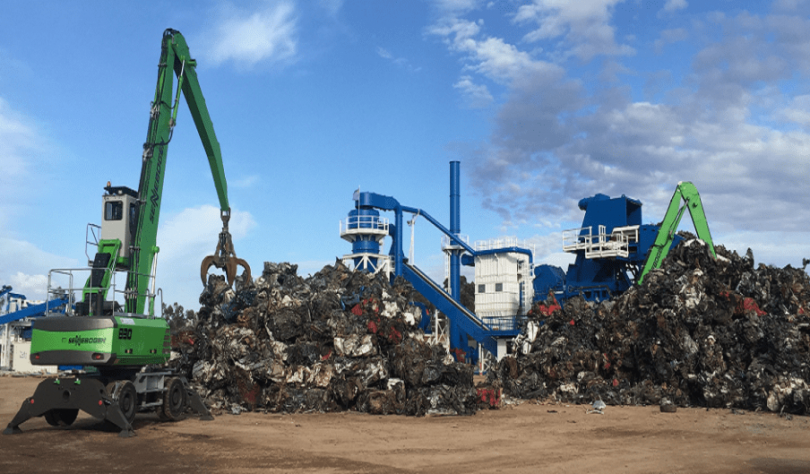 Coming to Fyshwick: environmental and health issues can be dealt with, according to the planning authority. Photo: Supplied.

The ACT Planning Authority has approved Access Recycling’s proposal to upgrade its scrap metal operation in Fyshwick but a new Greens minister has warned that the community expects election commitments to review other waste proposals in the suburb to be met.

Community groups had opposed the upgrade, which they argued would have detrimental environmental and health effects, particularly from a ”fragmentiser” that will shred whole cars in the open air near Fyshwick businesses and several hundred metres from homes.

The notice of decision includes conditions to contain the amount of waste processed to 30 kilotonnes a year and minimise noise impacts, but it accepted assessments from the Environmental Protection Authority and the ACT Health Protection Service that the company’s mitigation strategies will contain emissions and dust impacts to safe levels.

The air quality at the Lithgow Street site will need to be monitored regularly to confirm that emissions are at safe levels, reporting to the EPA.

The shredders will have to be set back 15 metres from the site boundary and a soundproofing acoustic hood will need to be installed to contain the noise from one of the processors.

Thirty-seven written representations were received during the public notification period, as well as further correspondence from representors and community members after that.

The key issues raised included whether the application was in the correct assessment track; setbacks and proximity to adjacent sites, businesses and residents; health impacts from potential emissions; and that it was a hazardous/noxious industry. 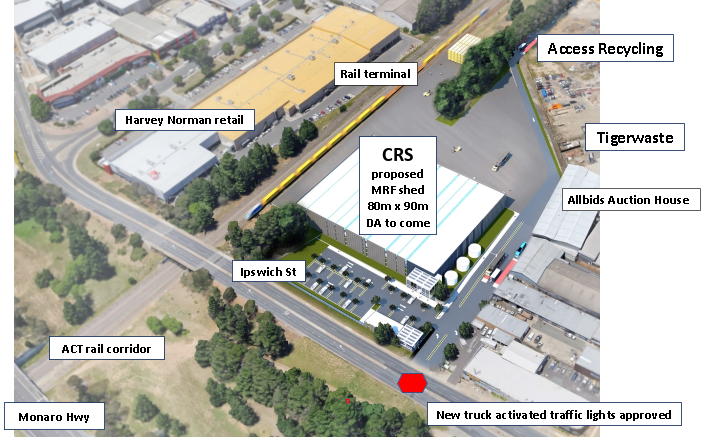 The proposal was one of a number of waste proposals that sparked a fierce campaign from some Fyshwick businesses, which formed the Fyshwick Business Association, and inner south community groups, that argued waste processing was now incompatible with a changing Fyshwick and its proximity to new residential development.

Labor came out in opposition to the CRS proposal, while the Greens called for a moratorium on all such proposals and a review of Fyshwick’s future. Both parties prefer any new waste plants to be co-located in Hume.

New Greens Environment Minister Rebecca Vassarotti said the waste issue and the future of an evolving Fyshwick would be a priority for the government.

”There is a really important suite of work that we need to do in relation to the very strong commitments made by the parties of government in relation to Fyshwick and the waste proposals,” she said.

”It is something that we will be working fairly immediately on.”

She said the Greens had been concerned that waste policy was being dictated through the planning system ”which we don’t think is appropriate”.

She added that the government needed to be clearer that waste processing should take place Hume.

”There is a shared understanding around the evolution of the Fyshwick area. It is certainly on the immediate work plan,” Ms Vassarotti said.

”Clear commitments have been made and we intend to deliver on those commitments.”

This spells trouble for the CRS proposal, which the Environment, Planning and Sustainable Development Directorate says has been submitted but not yet formally lodged, and the bigger Hi-Quality building and commercial waste proposal in Tennant Street, for which a draft Environmental Impact Statement has been submitted.

CRS, in which Access is a joint venture partner, has spent millions getting the proposal to DA stage after responding to the previous government’s invitation to industry, and may make a compensation claim that could end up in a costly court battle.

ACT was acutely aware of 2.5 particulates in January 2020. Industry Sector Regulation and Support of the respected Queensland Dept of Environment and Science has a guideline of 1.5km from residences for scrap metal facilities using these fragmentisers. The same Fyshwick company set up fragmentisers in Wingfield SA and the distance from residences was 1.25km. Why then do ACT EPA and Health authorities not recognise what is accepted world wide as evidence-based offensive and polluting industry requiring a location where the impact will not cause environmental degradation and threaten the health and safety of people. Perhaps the answer lies in the mistake made by the Planning decision maker who in his Notice of Decision confused and wrongly identified the machines. There was no notice taken of the 8 fires at the recycling sub lease in the past 6 years, one of which was an explosion heard all around Fyshwick. And no recognition that these fragmentisers will increase the fire risk. The proponent’s fire precautionary measures have always met the ESA standard. It is the nature of waste recycling which has unpredictable fire hazard.

Both the ACT Government and Transport for NSW have supported this proponent with discounted land sale and a $1million grant and a free hectare of strategic rail corridor which will impede any public rail use such as a future light rail to Queanbeyan. Metal waste is trucked into Fyshwick from the coast and further afield. It is questionable whether ACT legislation allows this cap on commercial activity.

On two blocks of land between Ipswich and Lithgow Streets there will be three major recycling and resource recovery facilities along with a freight train to Woodlawn landfill handling more than the tonnage of waste that is going into Mugga and Hume combined. The dominoes are coming down for Fyshwick.

I always get this overly-conservative “Karen” vibe when I hear people opposing things such as this. They should realize that recycling is important, regardless of whether they think its noisy. It’s the same sort of people who oppose wind farms because they don’t like the look of them. Why would you start a business in Fyshwick if you don’t like the sound.