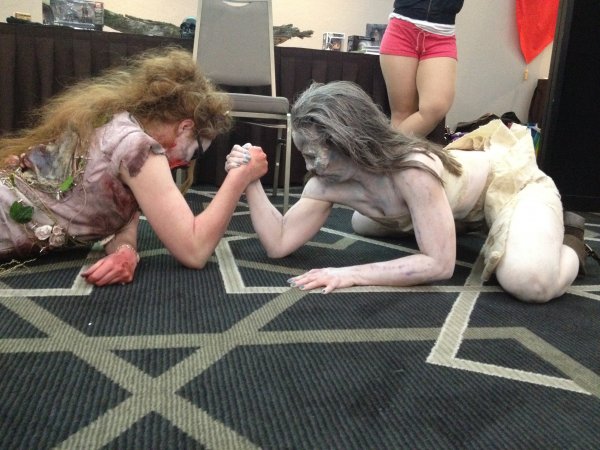 Canberra Roller Derby League has been having a lot of success with its popular (and very nerdy) trivia night fundraisers. Earlier this year our team “William Shatnerface” tied first at their Star Wars trivia night only to lose the physical challenge tie-breaker. It seemed a bit unfair to subject people who are distinguished for their encyclopaedic knowledge of Star Wars to a plank-off so we returned to claim our stolen glory and prove our nerdy worth to the entire world – or at least one of the upstairs rooms at the Civic Hellenic Club.

Just as a jammer in Roller Derby can pass the star to their pivot at the beginning of a new round, this time Star Wars tagged out so that two new topics, Game of Thrones and zombies, could provide a double-header challenge. And so Ser William of House Shatnerface donned his frostwolf cloak, held his zombie-whacking cricket bat aloft and prepared to face testy conundrums. Like trying to remember the guy who did that thing in that episode of Game of Thrones.

In keeping with the of the theme of the night the tables received drink service from roller derby stars in costume. Our table was served drinks by zombie Unikitty (the cat unicorn from the Lego Movie). So that’s one more thing crossed off the bucket list. I composed a song for her to celebrate the occasion:

I don’t know how you spent your Saturday night, but I spent mine writing poetry for zombie cats. 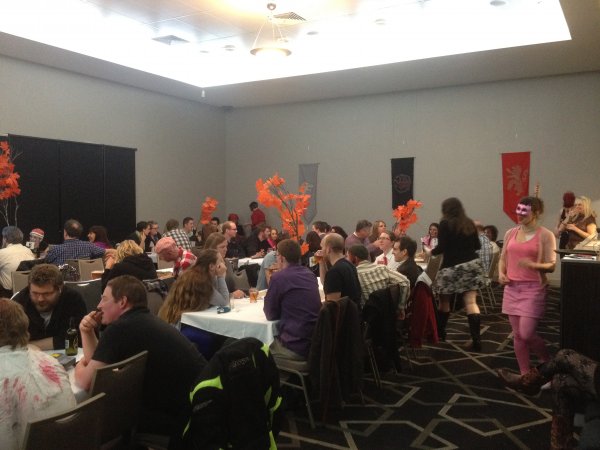 The Roller Derby trivia nights are normally not that hard – nowhere near as ruthless as the kind of questions you find at the Phoenix Pub’s nerd trivia. This trivia is pitched at a general audience of fans, not at obsessive experts. The Game of Thrones questions in particular were approachable, the sort of things you would know if you watched the TV series and had a great memory. The zombie round was harder, demanding true knowledge of the genre. And as for the obligatory general knowledge round… well, let’s just say that our team should have spent more experience points levelling up that attribute.

The highlight of the night was the zombie-themed sound round. This was grotesque and amazing. We had to listen to squishy, pulpy sounds and then determine where that particular zombie execution came from. The sound of a zombie being mulched by a lawnmower came from Braindead. One of the sound clips was the Monkey Island theme and we reasoned that it was from Monkey Island 2 since in the first game LeChuck is a ghost pirate, it’s only in the second he became a zombie. QED.

Besides the four rounds of trivia there were pre-show quizzes and a scavenger hunt, both providing points towards the total on the “losers board” (after all, there’s only one winner). You could also pay a gold coin for clues, but since this is a fundraiser that was totally OK and not cheating. As trivia veterans we did very well in the scavenger hunt. Always bring a condom to a trivia night: not for sex – for victory. Finally there was the costume contest, which came down to an arm-wrestle tie-breaker between zombie Margery Tyrell and a white walker. Margery won after a fierce struggle, showing her resolve to be Queen both of Westeros and of the undead. 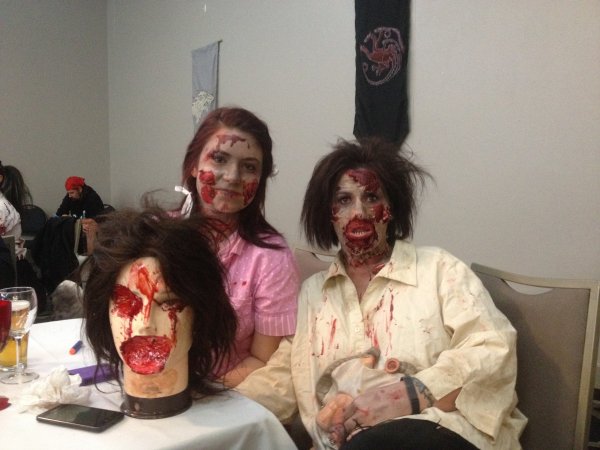 Overall it was a fun night. I miss the ambiance of the earlier Mount Stromlo location but the Civic Hellenic Club is much easier to access and the food there is always great. In the end we came second, although it was hard to feel any ire towards the victorious team – the Shawn of the Dead-themed “The Winchester”. William Shatnerface will be at the next one too, continuing to take trivia extremely seriously.

stargazer - 2 hours ago
I agree. It’s an old fashioned bakery and the fact it’s totally family run is fantastic. They are few and far between now... View
stargazer - 2 hours ago
Stopped in and got my buns today - they were worth the drive! But I Wish I could get them on my side of town! Kids loved them... View
Sonya Curran - 6 hours ago
I'd love to! Have never been! View
News 25

Ashley Wright - 2 hours ago
Martin Miller 50 years you have don’t that from Tuggeranong? The first suburb in Tuggeranong isn’t even 50 years, Tuggera... View
Julian Rowe - 2 hours ago
Dolla for the bus brah!? View
Heavs - 3 hours ago
Two points; 1. It's a bus interchange with provision for light rail in the future. Saves doing a bunch of re-work at a later... View
News 1

chewy14 - 2 hours ago
Hardly a surprising result, the government's relative silence on the issue and the budget allocation made it pretty obvious t... View
News 12

Trish O'Connor - 5 hours ago
is there a phone number to call each morning to check whether the balloons will be flying. View
Food & Wine 1

buttercup - 5 hours ago
Good on you Anna. Fresh ideas, reinventing yourself and your menu as the years roll by, delightful fresh food, and awesome cu... View
Community 17

Germaine Muller - 6 hours ago
Dude - you introduced me to Frugii Ben Fittler View
Topher Garlik - 8 hours ago
62 to young RIP to John Marshall. View
Julie Maynard - 11 hours ago
Thank you for helping me relive a childhood memory through your musk stick flavoured ice cream. View
Lifestyle 1

Conan of Cooma - 6 hours ago
I was an extra for the final scene in this movie. Leah is not only a bloody hilarious person but also an incredibly intense a... View
Food & Wine 71

Connie Senkoe - 8 hours ago
any body heard of Librafg with Nick Gibson. Is it a scam too? View
Community 24

Emily Vandenberg - 9 hours ago
Luke this looks interesting View
JS9 - 10 hours ago
Yawn. It has been shown time and time again that the overwhelming majority of 'charges' bought against the ABC by in general... View
Community 1

keek - 10 hours ago
Yeah, I'll stick to teaching my kids that the internet is a playground, and nothing said on it is to be taken seriously. This... View
Sport 34

Benita Bittner - 10 hours ago
Louise had to keep up with you lol. View
show more show less
*Results are based on activity within last 7 days

A documentary made by a Batemans Bay filmmaker about keeping Australia's oldest show on the road is one of five...
Breaking 0

Commuters from Woden to the City will be swapping their Rapid buses for light rail once the line is connected...
Community 24

@The_RiotACT @The_RiotACT
Looking for the perfectly located family home? Don't go past this four-bedroom property in Higgins - it's ideal for entertaining + ready to move into https://t.co/75M0QEbCnL (35 minutes ago)

@The_RiotACT @The_RiotACT
Can the ACT become a renewables powerhouse? An Assembly committee wants to know how we can make it happen https://t.co/SLGyWMXb3L (2 hours ago)

@The_RiotACT @The_RiotACT
Police have confirmed that part of a torso found on Mollymook Beach on 26 February belongs to a man, but not the 39-year-old ACT father who went missing while snorkelling near Batemans Bay on 25 January https://t.co/EtLRpObqE5 (2 hours ago)