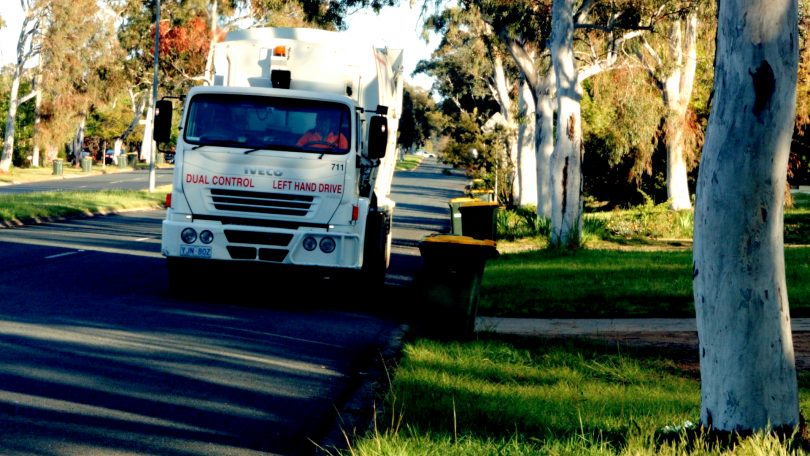 Suez has expressed its disappointment at drivers going on strike for the second consecutive Monday. Photo: TCCS Twitter.

Suez, the ACT Government’s contracted waste collector, says it’s disappointed its drivers have decided to undertake a second strike in as many weeks over a pay dispute with the company.

Garbage truck drivers will go on strike again tomorrow (9 November), affecting bin collections on Tuesday as well, after negotiations broke down between the Transport Workers Union and Suez.

The union is pushing for a 4 per cent yearly wage increase and paid breaks.

“Suez has been negotiating with the TWU in good faith for several months,” the company said in a statement.

“Suez is proposing wage increases of 2 per cent in 2021, 3 per cent in 2022 and 3 per cent in 2023. The company believes this offer is reasonable and fair given the current economic circumstances in Australia where [the consumer price index] over the 12 months to September rose just 0.7 per cent.

The minimum hourly wage for ACT truck drivers is $37.28 under the current arrangement, Suez said.

“Suez has taken measures across its joint Australia and New Zealand operation to limit the impact of COVID- 19 and the recession,” the company said.

“Across Suez, all divisions have taken action to adjust to the vastly altered economic landscape in which we currently operate in order to protect the business.

“Examples of these steps include no CPI salary increase for salaried employees in 2020 and a 25 per cent pay reduction for senior executive staff for three months at the height of the pandemic. Some employees also worked reduced hours.”

The industrial action will impact more than 40 suburbs across the ACT.

Suburbs that have a Monday household waste and recycling bin collection are advised that their bins will be collected on Tuesday, 10 November instead of Monday, 9 November.

Residents are encouraged to leave their bins on the kerb until collected.

However, suburbs that have a Tuesday household waste and recycling bins collection are advised that their bins will not be collected on Tuesday and missed collections will not be caught up.

Monday rubbish collection will be affected in:

Rubbish collection on Tuesday will not take place in:

Lucky them feeling safe enough in their jobs to take this action. We voted for a zero pay rise this year in the hope of keeping our jobs.

Methinks its time to get a HR licence so that I can move into a job with less stress and earn not much less than I do now.

You rusted on robotic Labor/Greens voters have just reelected a government that can’t even fix a problem that is the most basic function of a local council – garbage collection. Another four long years of incompetence to come.

The TWU/Green/Labor party is fixated only on getting the trains to run on time. They gave up on the buses. I don’t care what the garbos do because I can store my garbage and I don’t have any sympathy for Barr’s unit dwellers who have no options on dealing with garbage.

Good try. But we are talking about an issue between an outsourced service and its employees. Outsourcing is the favoured policy of your mob.

It sure how exactly the government can do much about it except claim contract default payments.

Why is this action only happening on the southside. If memory serves me right the last dispute only effected southside as well

Boot them all and hire new drivers. There are a heap of people out there looking for work right now. I’m sure some of them have a heavy rigid license. They might even be grateful to have a job rather than demanding above CPI pay raises in the midst of a recession.

Canberra is a ver expensive place to live so comparing their wage to other cities is like comparing apples to oranges.

Neil Davis So are you suggesting we ignore payment for skills

Stuart Green no not at all. What I am saying supports Canberra garbos receiving a higher wage than other jurisdictions as our cost of living is higher

Neil Davis and that is why they are not gaining support. That in itself is not a reason. Do welfare recipients who live in Canberra get a larger handout than day those in Melbourne??

Stuart Green. They have my support.

I do believe that Suez staff are being unreasonable in their demands.

Thats under $78k a year Col, which is just above the average wage in Canberra. Do you know what they get in other states?

Stuart Green I have a mate in Brisbane on the garbage truck and he said they are on way less than that.

I just found out in country Victoria my next-door neighbour is a garbage truck driver on 22.60 per hour. Luck I am retired now.

When do you retire

Lucky you, congratulations. Made too much money

Stuart Green I might apply for a garbage truck driver now.

not enough money in it for you

dont be angry and canberra garbos for getting more; get angry and the other companies for paying less. Garbos do honest, hard, dirty, and essential work. They deserve to be well paid.

If you want to be angry at people getting overpaid, let me gently point you in the direction of the ASX

Redmond Herrington I dont think people are angry for garbos wanting more, its about striking and impact on everyone else. The people who now have an excess of garbage at their homes dont determine whether a pay rise is approved or not

Stuart Green sometimes striking is the only remaining practical option. Those affected can have a real impact by applying social pressure. Elected officials especially feel that pressure and are more willing to offer higher contract prices which the company can pass on.

Ben Foley Sorry Ben, but I dont agree. Punishing your client base because your employer wont meet your demand is just not good business. If there were an alternate rubbish collection service, do you believe the general populous would support a strike, OR, go to the other provider. Holding anyone at ransom is not generally considered reasonable. I understand your argument except how many people do you really think will pressure elected officials for a garbage truck driver when they wont even do it for themselves. (for the most part)

Stuart Green well we’re all complaining about it here. This applies a little pressure.

Redmond Herrington they drive a truck that they don’t even have to get out of.

37.28 per hour for a truck driver is unheard of in Canberra so every transport company must be paying this rate for a body truck. I take it in good faith that the TWU is trying to turn the transport industry into the public services so can someone tell me how this lot and action buses are the highest paid in Canberra when other transport companies must have a different award wages compared to these to companies. Give them a pay rise because it will be added to our rates.

Then pay them better? Corporate greed during a recession is disappointing

Russell Nankervis what $95k not enough to drive a garbage truck?

they don’t get out of the truck, they don’t even touch the bins, they just sit on their ar$3$ … the truck does more work than they do 🤬

I think they should get the same as pensioners. Big fat zero. CPI didn’t rise.

I stand with the drivers ✊

Good faith? Really. Hope the company is not paid for missed deliveries

When you’re billed for a Coke that wasn’t served do you complain to the Coca Cola Company, or to the restaurant manager?

We pay for a service so pay rises should have been taken into consideration in their contracts. If they are making a profit why has it come to this?

Private company’s can do what they want… it should be government run. Would give them something to organise in Parliament House… 😂

Did you seek the TWU’s opinion on ‘good faith’ or were you happy to just to run a Suez press release? Conditions are also part of negotiations, not just wages. Seems Suez left that bit out.

Suez could end the strike by agreeing to a fair and reasonable pay rise. Suez’s profits grew by 3.9% in the last financial year, so recession or otherwise they can afford a sensible pay rise.

Ben Jones modern awards list the bare minimum legally required of the employer. I think people deserve more than that.

Ben Jones as I said at the start- Suez profits are up 4%. The people who produced those profits deserve that same amount in pay rise as a starting point.

Ben Jones but it is how bargaining works- the workers are suppliers, and they’re just as empowered and right in seeking the best price for their supply of labour as any other supplier is.

Maybe if the shareholders want some more profits they can do some work.

Ben Jones that’s not how industrial relations law works. The “fantasy land” you reference is the fair work commission, it’s just off London circuit. I’ve been there. If it were fantasy land they’d be serving fairy floss, and unfortunately there’s no such service there.

Not a squeak out of the Labor/Greens clique. But you wouldn’t expect them to understand the maths of a 4% wage rise when the CPI is just 1.75%.

Wheelie big bin collection changes are on their way 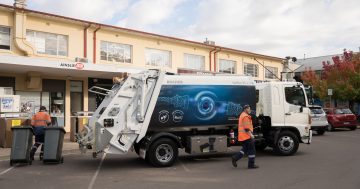 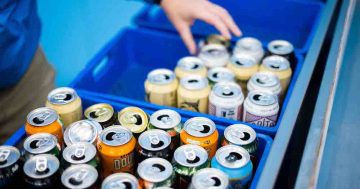