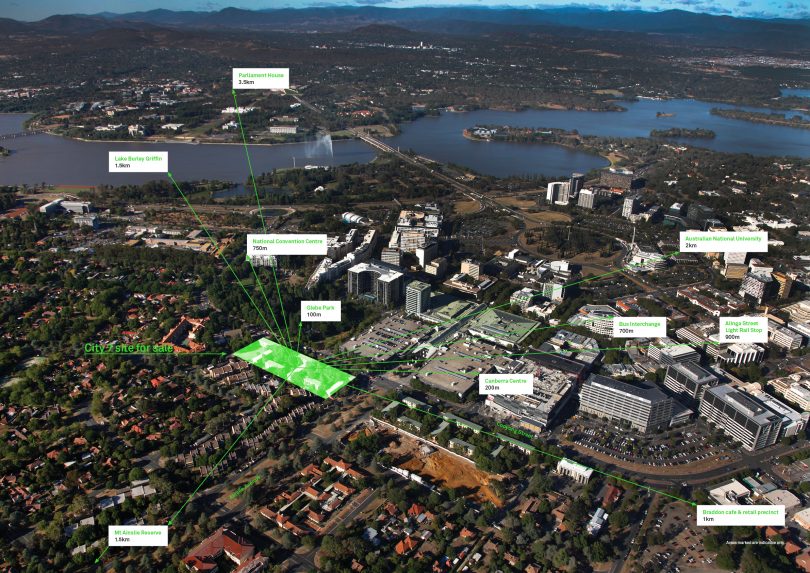 Canberra developer Geocon is planning a 500-unit, ”precinct style” development on the prime Bega Flats site it bought for $38.5 million on Wednesday.

Geocon fended off six other local bidders in a hotly contested auction of the public housing site in Reid opposite the Canberra Centre and Glebe Park.

Geocon managing director Nick Georgalis said the almost 12,000 square metre site bordered by Cooyong Street, Ainslie Avenue and Boolee Street was one of the best locations in Canberra, particularly because it was at the quiet end of the city over Glebe Park, which was a huge drawcard.

“It will be quite an exciting proposition for a lot of people, either first-home buyers, downsizers or investors,” he said.

Mr Georgalis said the development would include all the amenity you would expect to find in a precinct such as a swimming pool, sauna, gym, or cinema, as well as ground-floor commercial and retail space on the corner of Ainslie Avenue.

“It’s the sort of thing that you see nationally and internationally, and we’re certainly putting it into all of our developments in the ACT,” he said.

Mr Georgalis said there was mix of building heights permitted across the development but the corner of Ainslie Avenue and Cooyong Street could be up to 12 storeys.

Geocon expects to settle in May next year, then start work immediately with the demolition of the flats. It will be going to market in six months.

“We know the sales and demand for the apartment product in the city is through the roof,” Mr Georgalis said.

A development application will be lodged soon.

Geocon’s other buildings include Midnight in Braddon, Wayfarer in Belconnen and Infinity in Gungahlin.

City Renewal Authority interim chief executive Gary Rake said the high level of interest in the CBD site and the strong result were indicative of industry confidence in the city precinct’s ongoing renewal and growth.

“Renewal and growth in our city precinct are critical in accommodating Canberra’s growing population while making the city more vibrant, connected and sustainable,” Mr Rake said.

“With its proximity to Glebe Park, the Canberra Centre and the CBD, this site is a fantastic opportunity for a development that will have a positive impact on the area.

“I look forward to seeing plans for a high-quality development that brings new residents into the city and improves the lives of the people who already use the area.”

The Bega Flats is part of the “ABC Flats” that included the neighbouring Allawah and Currong buildings. That 25,630 square metre site sold at auction in February 2016 for $47 million.

The Authority said the sale of the Bega Flats public housing site brought a 15 per cent bonus to the ACT Government as part of the Commonwealth Government’s Asset Recycling Initiative. Public housing sold through the scheme would be replaced with 1,288 new sustainable public housing dwellings across Canberra.

It said all remaining public housing tenants would be relocated prior to settlement.

Height limits and other development conditions for potential developments are set out in the Reid Precinct Code.

I had to ask what precinct style meant. Apparently its real estate talk for a block of flats.

Perhaps, think of New Acton as a potentially fairer example of “precinct style”.

500 Units? Not much of a jump on the 350 that was suggested as appropriate before the sale.
I wonder how many visitors car parking spots there’ll be? And how many spots for residents? A few years ago the Government suggested that this development should have less than one space per residence as people don’t need a car in the city.

I had to ask what precinct style meant. Apparently its real estate talk for a block of flats.

I don’t think that’ll be a problem for Geocon’s normal target market (young people and investors). I’d be more worried about the residents of SHL’s alternative on the other side of the avenue and the existing residents further up the road.

I think this is an excellent result. That’s 500 dwellings (maybe 1000 people) that will live close to work and public transport, won’t clog up the roads every morning, won’t result in the clearing of another 100 hectares of bushland or farmland on the edge of the city, and will contribute to reinvigorating Civic as a place people actually want to go.

Danny O'Donnell - 3 hours ago
Lynda Bailey Daniel would have that tucked away 💵💵😜... View
Opinion 19

A_Cog - 7 hours ago
The ACT Labor Government's terrible performance running core services like Health is what SHOULD matter in elections, but in... View
Best of Canberra 29

maxblues - 9 hours ago
South Australia recently banned the use of political corflutes for future elections., not just because of the visual pollutio... View
I am a Rabbit™ - 10 hours ago
The Greens classify as a minor party but don't seem to believe that spreading the equivalent of spam everywhere is a fair res... View
steve2020 - 18 hours ago
The problem I find with corflutes and other political advertising is that it can be a bit overboard, with the same signs over... View
News 5

ny4231 - 10 hours ago
This proposed apartment is built right to the edge of the block and is not set back at all. It is not difficult to find a pla... View
Sport 1

Stephen Saunders - 11 hours ago
What I thought. Somebody send him a soft-toy koala. View
ACT Election 2

Nudist - 12 hours ago
L an excellent summation of the current state of play in the Gungarlin electorate. I’ve had involvement with Peter on at le... View
Fiona Carrick - 19 hours ago
Hi Peter We are singing from the same song sheet. It is time the Government looked after our Town Centres! The Woden Town Cen... View
Community 8

@The_RiotACT @The_RiotACT
Gyms have never been cleaner and demand is surging, but COVID-19 restrictions are making life tough for fitness operators across the ACT. It's even worse if you're across the border in NSW https://t.co/QVfKUjEb4s (22 minutes ago)